The current science paradigm, known as space time, is a very useful and essential part of our perception of physical reality. Science takes the gravity of Newton along with the relativity of Einstein to predict the futures of macroscopic objects like people and planets. Science also takes quantum mechanics to predict the futures of charged microscopic objects like electrons and quarks, which is a realm where gravity force has little impact.

However, this patchwork of theorets is far from complete and is not a self-consistent representation of the universe. That does not mean that precepts of space time are not useful, but it does mean that space time cannot explain some key mysteries and it simply is not very pretty. Instead of some very simple and straightforward basic theory of the universe with a few simple principles, the principles of space time are actually quite difficult to even simply describe. Space time has a large number of axioms, dimensions, particles, and constants, along with a long list of exceptions and mysteries and it is quite a chore simply to list them all and to keep them straight.

There are all total some 61 fundamental particles or dimensions to matter…at least so far, but many of these particles are related by symmetry like antimatter. Of course, that symmetry is only for quantum action and has no meaning for gravity action. And then there are two fundamental forces for matter action, and gravity force does not have an exchange particle and charge force has the photon and gluon as exchange particles. This means that there are 61 dimensions of matter, with the mediating exchange of bosons includes nuclear strong and weak forces as well as charge force.

The patchwork that is space time then has its five axioms and some eight dimensions along with 2 different action equations and along with some 61 particles and 26 fundamental constants…so far…and there are also a number of unresolved mysteries such as dark matter and dark energy as well as the mystery of the inner workings of black hole singularities. And of course the awkward patchwork of gravity and charge forces results in a space time with an elaborate, perplexing, and sometimes inconsistent patchwork of different models and theories that leave the gaps in space time as its imperfections.

With the model of the universe in such a disarray of gaps and singularities and mysteries, it should not at all be surprising that we can't figure consciousness out. There are very few people who even understand the house of mud bricks that science has built and it is a chore for them just keeping the mud bricks patched up after the occasional downpour of alternate ideas.
Posted by steve agnew at 12:46 PM No comments:

The Machine of Consciousness 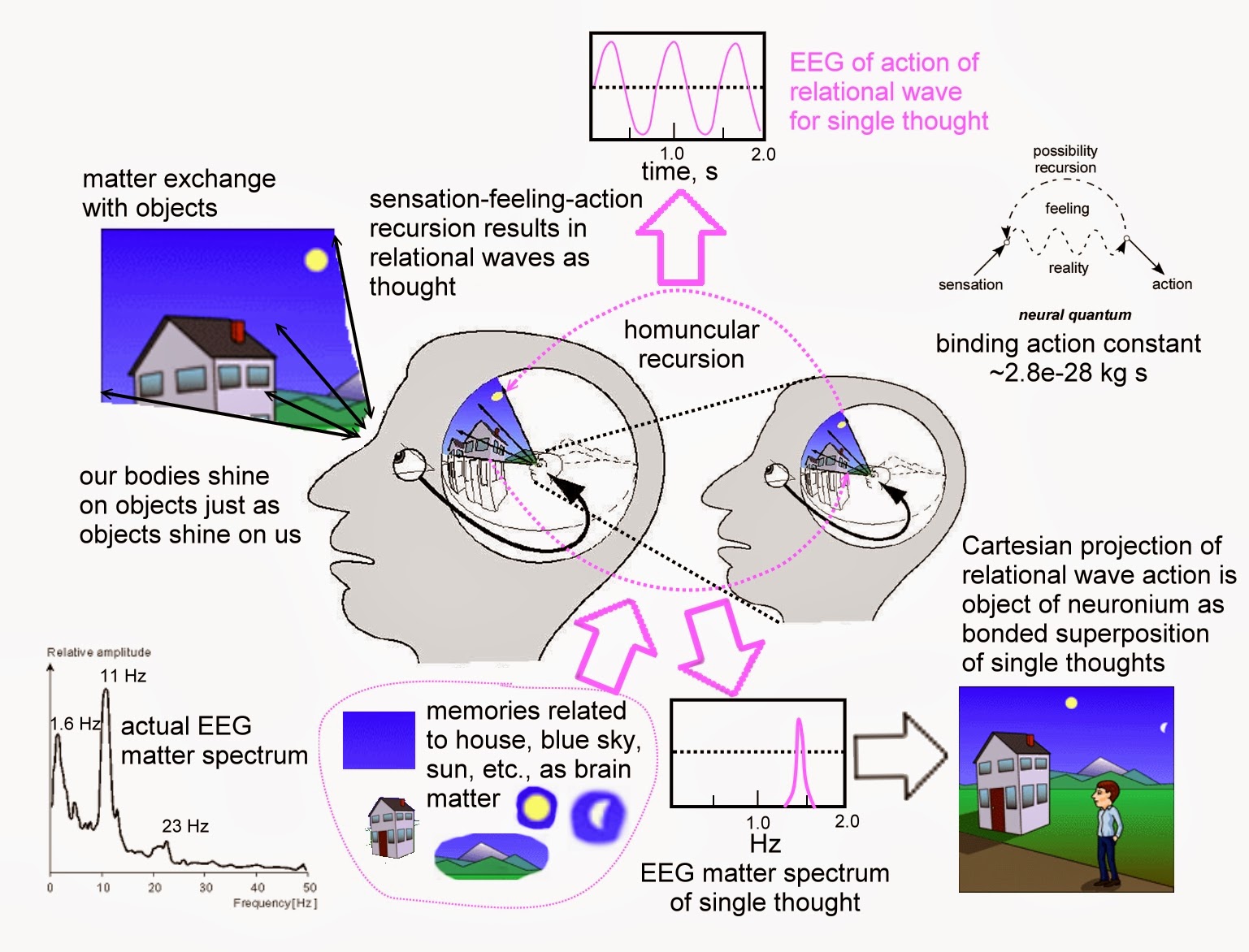 The homuncular recursion is often called absurd because it does in principle go to infinity, since each homunculus has its own homunculus inside that head and so on. But there is absolutely nothing wrong with a homuncular recursion or any recursion as long as it converges in a reasonable number of recursions. When a homuncular recursion converges, it results in a resonance wave of neural action called a thought. Thoughts make sense out of the outer world and are the resonances of inner relational waves shown plotted in time for a deep meditative delta wave. Most thought, of course, is much more complex than the singular thought of a deep meditation or sleeping delta resonance.

There are many math series and computer do-loops that show convergence even though they could also go to infinity in principle and such series make sense as long as they converge to a useful result with a useful precision within a useful time. Recursions are part of the solution of consciousness and fundamentally, neural recursion is that reason that we often end up with circular definitions in our discourse and thought.

There are many important details about consciousness that this figure sketches in, like the role of Cartesian versus relational thought and the important role of memory for consciousness and perception. Memory is our lifetime of objects related to the experience of the moment. However, this assumes that cognition works somehow and jumps right into feeling and consciousness. This figure also does not include the very important roles of emotion and the primitive mind in feeling and choice of action.

Our brains exchange matter with the objects in the world that we perceive and while the typical matter that we exchange is made up of photons of light (i.e. visual images), sensation can also be sound, taste, touch, or smell as well. Don't forget that our body shines on the same object whose light then shines on us as well. The EEG spectra (see also) of the brain show the amplitudes of neural recursion waves associated with thought according to the various states of the mind. The EEG amplitudes are the relational waves of recursions of electrical activity among neurons present in our brains.


These EEG spectra include the thought spectrum from a single frequency resonance that represents deep meditation as well as sleeping delta waves. From the relational neural waves that are connected to objects, our Cartesian machine resonates with the possibility of an object but that projection only exists in our mind as a possibility of our particle-like Cartesian reality. The mathematics of this information extraction are straightforward as we go from neural pulse time relational amplitudes to matter (or frequency) spectra of thoughts. 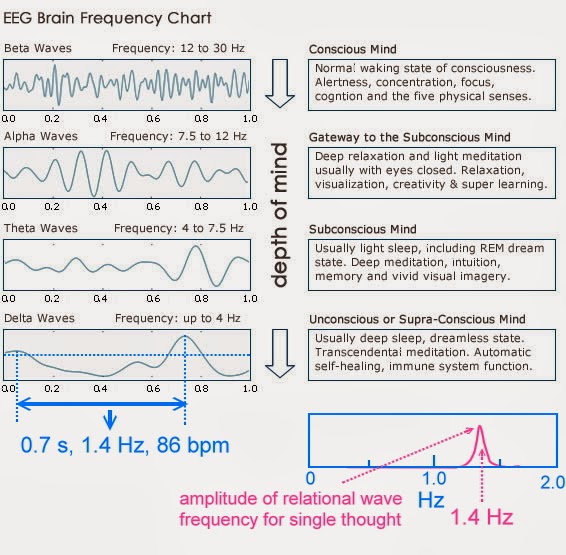 In principle, each resonance of an EEG spectrum represents the recursion of a single thought, but our conscious mind is able to keep the resonances of each thought separate from each other. In order to decode the resonances of a single thought needs the phase information as well as the amplitudes. The often neglected phase information of EEG resonances, which is the relative firing of the neural impulses, permits the deconvolution of EEG’s into distinct thoughts out of the power spectrum, i.e., make sense out of the superposition of all of the thoughts of each day. A desirable feeling or thought could be either a peak or a valley in an EEG spectrum and any reasonable experience would be a superposition of a large number of thoughts.

The deep meditation EEG shows that the single thought peak at 0.70 (1.4 Hz) represents a time wave with a recursion of about 0.70 s, which is close to the period of a heartbeat. Human reaction times are about 0.1 s or so and the brain is typically flooded with neural waves as the beta wave plot shows with recursive waves as fast as ~0.002 s or 500 Hz.


There does appear to be a recursion in the deep meditation spectrum at ~1.4 Hz, although that recursion is only one of many. Synchronized with the heartbeat, though, this peak may be the singular state of awareness that deep meditation feels like and this deep thought may also be the fundamental action of our brain’s clock, which is the heartbeat.

Assuming a neural action potential energy is 1.6e-30 kg (120 mV at 200 Mohms for 2 ms), the minimum energy needed for recursion would be two neural actions at a matter equivalent energy of 3.2e-30 kg. That would result in an action of 2.3e-30 kg s at 1.4 Hz and this neural action is the exchange matter (or binding energy) for a single neural quantum of thought just as Planck's constant gives the energy from a single photon of light.

This model of the mind as neural resonances would then be very much like that of a laser with neural action waves in place of light waves. Without coherence, the modes of a laser cavity are random and chaotic, and so the resonances of thought only make sense with coherence. Thus the missing piece for being able to deconvolve our mind's relational waves may be a measure of the phase coherence among the recurring thoughts as neural waves that are the EEG. The phase of the delta wave is the key to unlocking the time wave phase coherence of the human mind.

For completion, this last figure shows the EEG waves of various states including our final eternal thought... 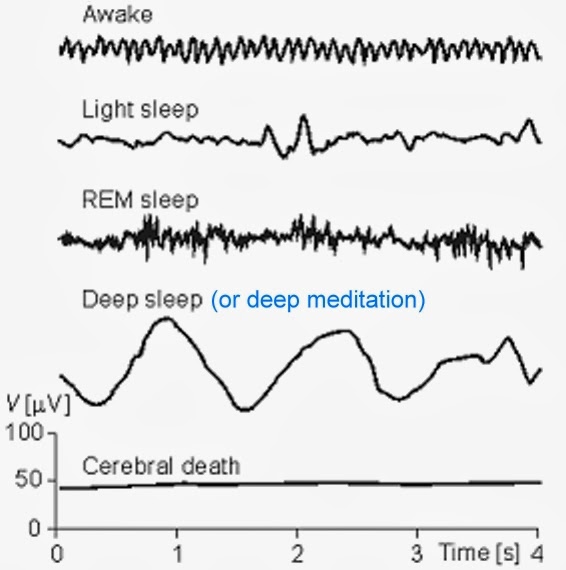 Comment:
This paper shows the different states of the mouse mind, awake, asleep, and anesthesized. Especially nice were the delta and alpha wave measurements that correlated the brain cerebral spinal fluid (CSF) infusion that occurs during sleep. Neural proteins like Abeta build up while awake and dissipate during sleep. Brain cells expand while awake and shrink during sleep, thereby drawing CSF in during sleep and pushing CSF out upon awakening. 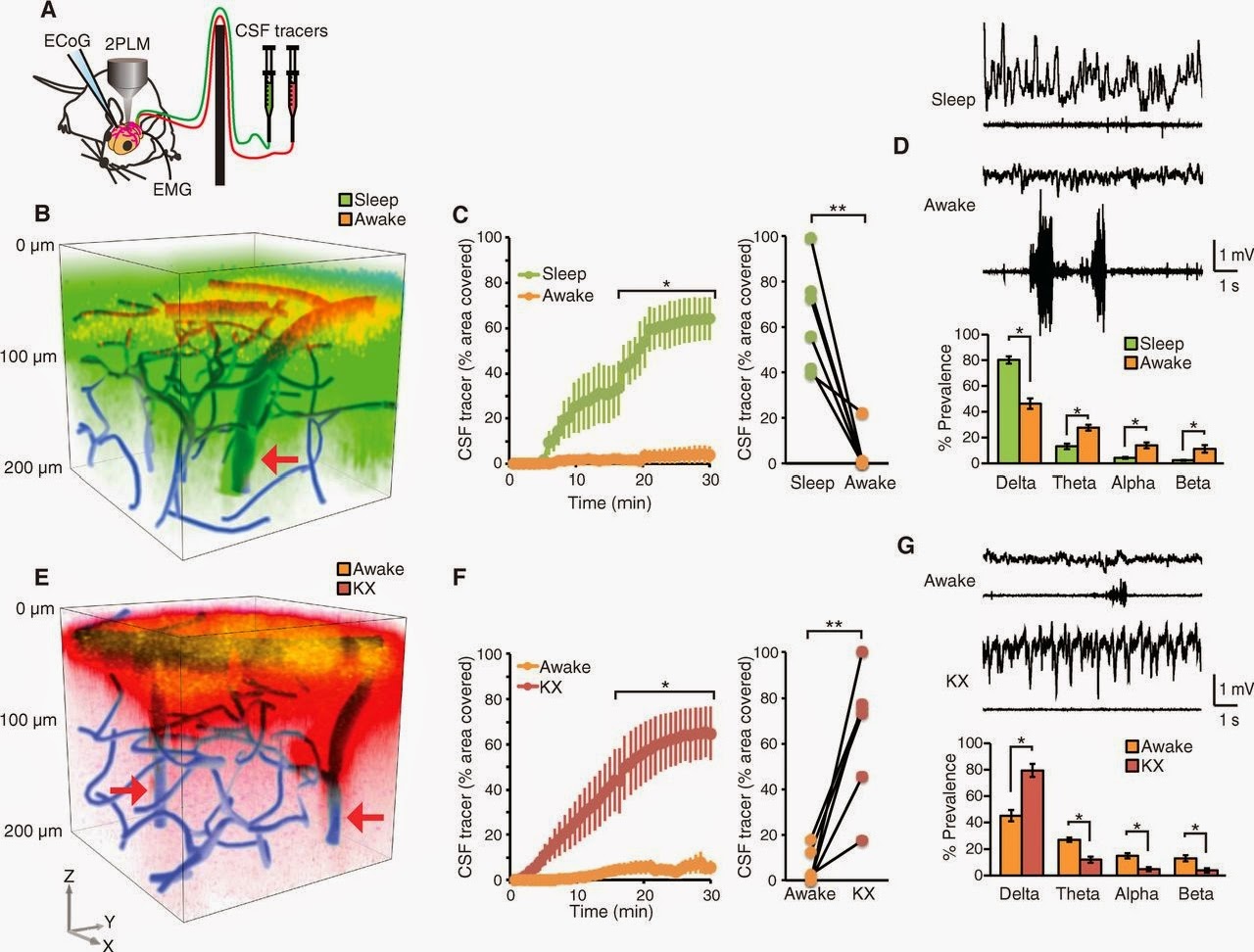