Applied psychology accepts and uses the five-factor model (FFM) as an objective measure of personality among people [Hoff, et al. 2021]. Despite the subjective ranking by people’s responses to a set of questions, there is objective agreement among researchers about personality differences. These subjective self-determinations show both the objective mean of each factor within a sample as well as the variability about that mean.

Although researchers use any number of different words for the five factors, most studies use some variation of the following personality factors or their complements:

However, looks and gender are mostly genetic, while half of intelligence is genetic, and the remaining characteristics are largely free choices of education, well being, family, religion, and job. In fact, our feelings determine the free choices that we make and those free choices in turn make up our personality factors.

In addition to personality factors and characteristics, it is also important to have an emotion model for feeling. Emotions are what give us feeling and it is feeling that gives us free choice. Five emotion complements are:

While there are many other emotions, they map onto this set as laughter (joy), sorrow (misery), disgust (shame), love (compassion), hate (anger), as well as feeling pain (misery) or rapture (joy). Free choice is the emotion that not only determines outcomes of action, free choice also inhibits action. While we are born with nearly uninhibited free choice, we learn inhibitions to that free choice as we mature. Our first awareness of inhibited action by about age 2 shows us the permanence of things since that is when we learn that things continue to exist even when we do not immediately see them. It is after all very important to learn to inhibit actions that do not result in desirable outcomes.

We learn further social inhibitions by about age 6 or so and these inhibitions form the basic moral and ethical archetypes for the rest of our lives. From age 6 on, we acquire long term memories based on those archetypes and continue to learn even further inhibitions. At age 6, Formal education begins along with intellectual, social, and physical development. Sexual maturity in particular entails a large number of inhibitions necessary for social bonding. Finally, at 18, we have learned enough inhibitions to bond with others and effectively contribute to civilization. We also have learned how to handle the inevitable social conflicts that occur with others.

A recent personality model study [Hoff, et al., 2020] showed the changes in personality over 12 years in Iceland for two different gender-balanced populations: sample 1 of 485 ages 15 to 27 and sample 2 of 1,290 ages 17 to 29. The study looked at how the FFM correlated with the three outcomes of education, prestige, income, and gender. However, there were very interesting high correlations for gender as some of the largest correlations of the study. For example, men had higher income than women even though women had more education than men.

These gender correlations are statistically significant, but gender differences still fall well within the factor ranges of both men and women. This plot shows men and women social scores are shifted normal distributions with the same standard deviations. The means of men and women shift by -/+beta*SD, respectively, where beta is the slope of the social correlation regression. 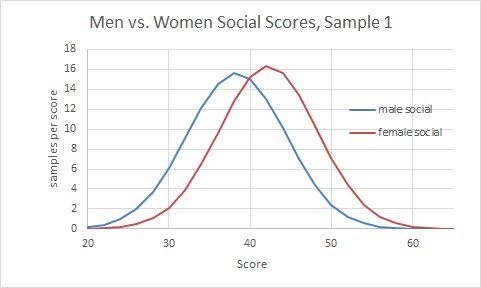 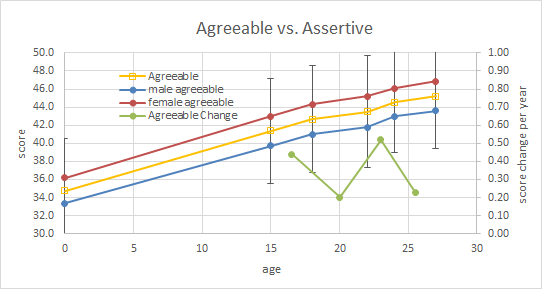 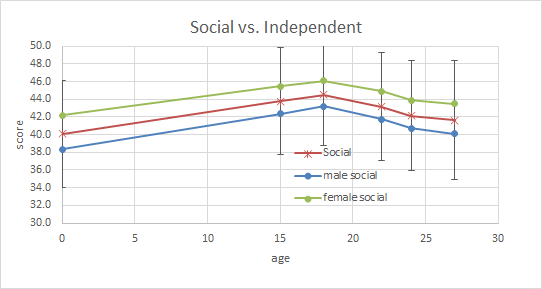 Confidence is another strong correlation with income, but confidence is also strongly correlated with education and yet men are more confident than women, which is consistent with greater income for men. However, women have higher education than men despite having lower confidence. Evidently, women have higher education because they are more agreeable and more social, not because they are more confident. 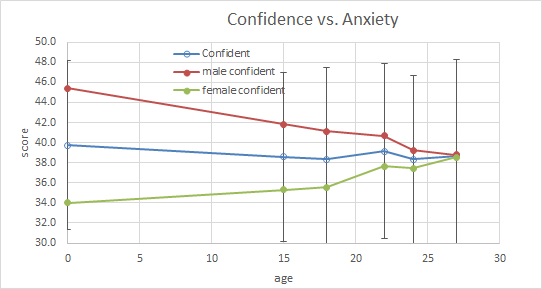 The above plots were only from sample 1 and yet sample 2 also showed these same trends. While sample 1 did not show a significant difference in creativity for men and women, sample 2 did. For sample 2, women were more creative than men at 17 as well as less creative than men at 29 as the plot shows. Other studies [Costa et al. 2001] also tend to show higher creativity for men than women, which is consistent with the age 29 results of sample 2. These results seem to suggest that while women tend to lose creativity with age, men tend to become more creative with age. 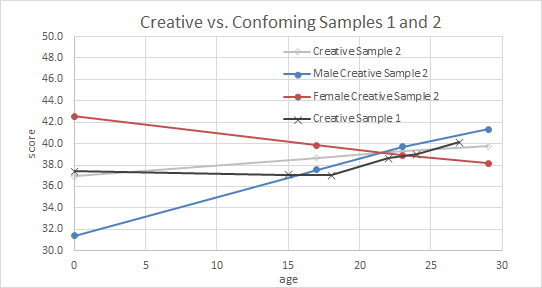 The five factor model is a very useful objective measure of the variation of personality within gender-balanced sample populations as well as for gender-balanced sample populations over time. The FFM’s find statistically significant differences between men and women, but also show that those differences fall well within one standard deviation of either men or of women. This paper shows correlations of education, prestige, income, and gender with each of the five personality factors: confidence, social, creativity, agreeableness, and conscientiousness.

Obviously, the study associates women’s anxious, social, agreeable personalities with their higher education but lower income than men. Men’s confidence, independence, and assertive personalities are then why men have higher income, but lower education outcomes than women. 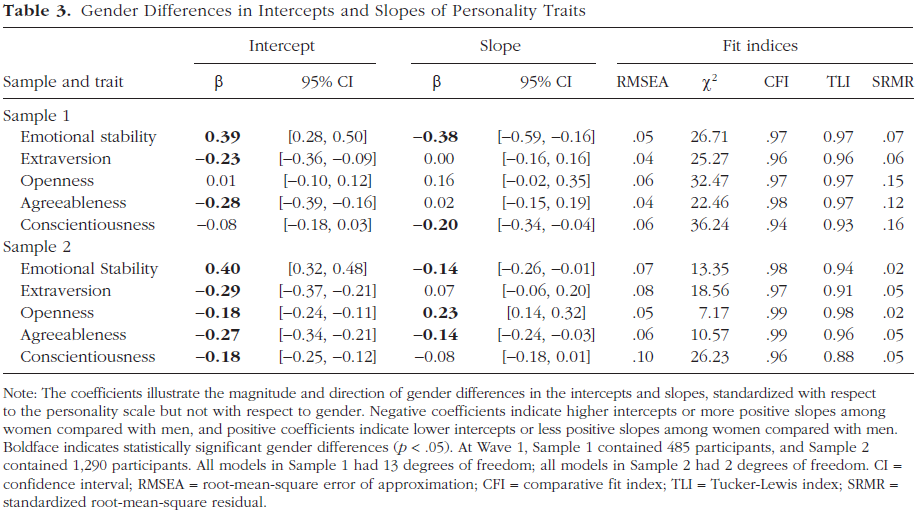