Many people in science believe that free choice is an illusion since they first of all believe in a determinate universe where all choice is fate or karma. Since we actually live in a quantum universe with a fundamental quantum uncertainty, there is no such thing as predetermined choice. In an uncertain quantum universe, quantum science believes in free will because we all have uncertain quantum futures. You see, all of those same determinists necessarily also believe in personal responsibility as well and they also believe that certain beliefs are not illusions.

Belief is a necessary starting point for consciousness as well as science and there are certain axioms in which people must simply believe in order to make sense out of the universe. Typical beliefs are in space, time, and matter and from those simple beliefs emerge the actions of all other constants and consciousness. A belief in space and time then means that action follows from the integral of either space and time with mass, which is equivalent to energy of course. However, it is also possible to believe in matter and action first of all and then have space and time emerge from matter and action.

Except for those insane or comatose, somehow determinists believe that the universe creation of the cosmic microwave background (CMB) a long time ago decided each person's fate today and it was the CMB creation that predestines the way that people are and therefore there is no meaning for free choice. In this view, each person's destiny stems from CMB creation and their choices are all simply determined by what caused each choice. 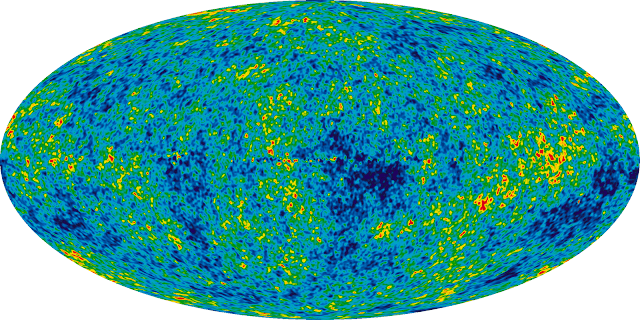 The CMB represents the face of creation and this Mollweide plot shows the whole sky all around us, side-to-side as well as up and down. The CMB shines on us as the source of all that we are at 2.7 K and blue, yellow, and red colors of the Mollweide plot represent very minute temperature variations (~50 ppm) from the average 2.7 K. This plot follows after correcting for our absolute motion and everyone in the universe can see different versions of this same CMB. Creation has always been a big deal for religions and let there be light has long been a classic story of a source shining from the nothing of space to observers on earth.

The ancient light of CMB creation continues to shine on us today at 2.7 K with the same uncertain future just as we shine our uncertain futures back onto the CMB creation as well at ~300 K. The shine that we exchange with the CMB binds us to creation and the CMB shine is still as uncertain today as it was at creation. It is the uncertainties in the shines of all sources and observers that represents the basic uncertainty of photon free will.  We freely choose action or inhibition based on feeling and feeling is a very low energy and low temperature binding of neural packet shine in our mind subject to the same quantum uncertainty as shine from all other sources.

While the gravities of both Newton and Einstein both show determinate futures based on cause and effect, the true nature of quantum gravity involves the exchange of biphotons. For classical  gravity action, the average future is the same as the most probable future but for quantum action, the average future is different from the most probable future. The notion of cause and effect is the foundation of a causal universe and is the basis of the determinism of general relativity as well. All sources and observers follow well-defined geodesic paths where their most probable futures are the same as their average futures. So quantum gravity largely represents the gravity of general relativity up to certain limits.

Science has long known that the action of photon exchange does not commute between a quantum source and observer. This means that the shine of a source photon absorbed by an observer results in an action different from the same photon shine emitted from the source. That difference in action is the quantum action of the Planck constant and the phase factor, ihae and simply means that action and matter are inextricably linked to each other.

A person choosing between two otherwise equivalent doors forms a neural superposition state in their mind of those two choices. That superposition only exists for some short period of decoherence of that thought and the same superposition represents a single photon path through each of two slits. Once a person chooses and acts by walking through one door or the other, only a remnant of that neural superposition of choice remains as memory. The cause for that choice is not always possible to understand and when the primitive mind chooses action, excitation or inhibition, then the conscious mind rationalizes the choices that the primitive mind has made. 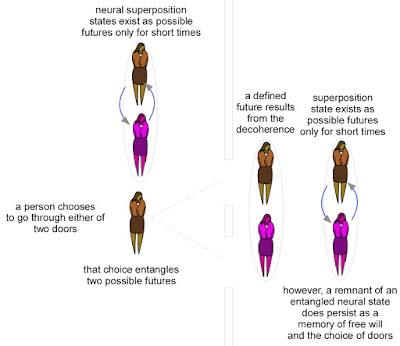 Our experiences of predicting gravity actions provide us with an overwhelming sense of cause and effect. By intuition, what goes up, must eventually come down and so intuition largely favors the cause and effect of gravity and determinism. The causal nature of the quantum bond and the entangled state between a source and observer seems counter intuitive. The quantum source and quantum observer are in a superposition state where both cause each other's effects. The cause of photon shine from a source entangles the effect of absorption by an observer just as the cause of absorption of photon shine by an observer also entangles the effect of the photon shine from a source. 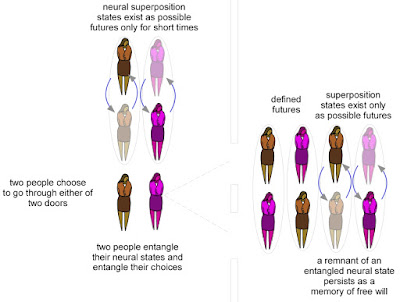 Quantum free will means that many of the choices that we make in life are fairly predictable because of the complementary biphoton nature of gravity; for example if we are hungry we tend to eat. However, what we choose to eat may not be predictable at all given several different choices and we are therefore not always able to understand all of the quantum choices of our primitive mind. We can be compassionate and choose the same door as another person or we can be selfish and choose a different door from that person.