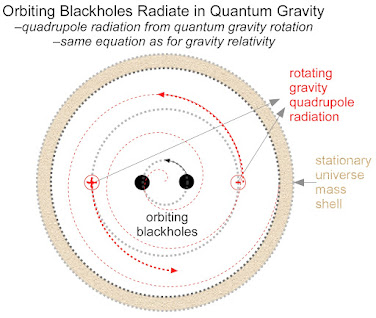 The quadrupole radiation of a gravity orbit is inherently electromagnetic photon exchange in discrete aether and so there is no need for gravitons different from photons in discrete aether. Relativistic gravity radiation is then a dark radiation from discrete aether quadrupoles that have their dipole fields spread over the whole universe. This is because the complementary dipole photon separation for the quadrupole is on the order of the radius of the universe, 7.4e25 m.
The quadrupole radiation of a gravity orbit depends on its mass gradient, (m/a)5, as well as, to a lesser extent, the eccentricity of its orbit, ϵ. Spherical orbits have ϵ = 0 and so a rotating binary of equal masses has a simple expression where gravity radiation goes as the fifth power of its mass gradient.

For two orbiting bodies of very different masses like the Sun and Mercury or the stars of a galaxy, the expression becomes

For two radiating and orbiting bodies like a binary star of equal masses, there is an additional vector gravity term that is the ratio of radiation and relative velocity.

Table 1 shows characteristic dipole and quadruple emissions of the orbits of Sun-Mercury, Milky Way stars, blackhole merger, and the Sun in the Milky Way.

The merger of two 6.0e31kg blackholes over 0.25 s results in quadrupole emissions of 3.0e29 kg/s at 1% of the total mass loss of the event. The onset of the inspiral occurs at r = 7.6e12 m, which is the point when the quadrupole radiation is just 1% of the total. There is also dipole emission from gravitation, but that emission is spread all over the universe.

Posted by steve agnew at 3:52 PM No comments: