Classical relativistic gravity is a scalar force, since it does not depend on direction and so classical gravity attracts bodies together just like charge is also a scalar force that attracts opposite charges together. Nevertheless, both gravity and charge do act along their lines of action between bodies. In contrast to classical gravity motion, charge motion further results in vector force call magnetization that then couples charges together with a force perpendicular to each of their lines of action.

Since matter-action gravity is really just a version of quantum photon exchange, there is also a quantum gravity vector force also exists. However, gravity motion always couples complementary photon pairs as a quadrupole and so vector gravity couples the motions of stars and would also be perpendicular to their lines of action. In fact, vector gravitization is then the precursor to the dark matter force that couples galaxy stars into a constant rotation.

String theory is a very flexible theory of everything and uses branes as either loop branes or D branes with any number of hidden new dimensions. The "D" stands for Dirichlet boundary conditions as two brane endpoints and not a string loop. String theory can then explain any measurement by adding as many new dimensions or parameters as needed to fit measurements of physical reality.

However, a quantum D-brane string in just one dimension has all of the properties of an electron charge and matter oscillation and so a trivial D-brane with just one dimension is consistent with physical reality without any extra added dimensions. A D-brane electron would actually span the universe and not really be microscopic or hidden either. In fact, a photon and any quantum particle is then also equivalent to a trivial D-brane.

Therefore, such trivial D-branes already make up the causal set universe. Such quantum D-branes have the quantum property of oscillation along their lengths and so a D-brane also represents a photon resonance geodesic between two emitters, say Alice and Bob. Thus, D-branes without any new hidden microscopic dimensions form the basis of a quantum causal set universe and so there is no need for any new but hidden microscopic dimensions. 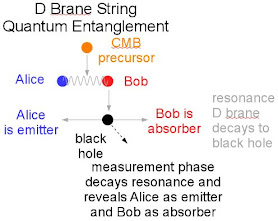 Alice and Bob in a resonant photon exchange represent a D-brane, but now as the resonance or connection between two Dirichlet endpoints or vertices. Of course, such D-branes can and do span the universe as the CMB, but such D branes actually represent the bonds of quantum photon charge exchange as well. Since all bodies have a very large number of D-branes that bond them to the universe, attractive gravity between two bodies is actually a result of the universe collapse and so the universe is not expanding.

After CMB excitation, the Alice-Bob D-brane resonance does not reveal any cause or effect and so this universe is not yet real. A black hole absorption occurs at Bob is what reveals Alice as the emitter precursor and Bob as the outcome absorber. The black hole absorption sets the arrow of time and is what makes the universe real.

There are many things about the universe that D-branes reveal. For example, bodies shadow each other’s D-brane bonds with the universe along their lines of action and so gravity is simply a result of these shadows of the universe collapse as the diagram below shows. String theory is just as fun as causal set theory... however, loop quantum foams do not have branes and so are no as much fun... Tejinder Singh, though, has a great TOE that does use path integrals and cosmic time along with octonions... but we need to get spin involved somehow as well... 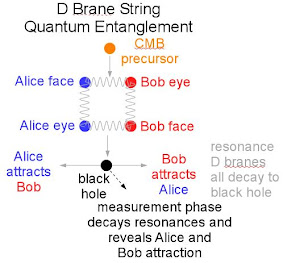 Posted by steve agnew at 9:14 AM No comments: