The universe changes by quantum matter action and so quantum phase, matter, and action are all just the way the universe is. Quantum phase, matter, and action and are therefore all very useful archetypes for predicting outcomes from precursors. There really is no need to interpret the nature of quantum phase just as there is no need to interpret the natures of quantum matter or action. While people do not often ask about the interpretation of the very intuitive and causal realities of matter and action, people do still ask about the interpretation of the somewhat less intuitive and irrational quantum phase. People ask, how can a single particle exist in two different places? Are there particles or are there waves? In particular, people ask how is the counter intuitive quantum phase surreality consistent with the more intuitive macroscopic reality of relativistic gravity matter action like cannonballs.

Of course, two people who like each other are also in phase and will bond while two people who do not like each other are out of phase and will conflict and therefore not bond. A single person can also like or not like themselves as well. Even though we don’t normally associate the intuitive feelings of bonding among people with quantum phase correlation, quantum phase bonding is a perfect analog for human bonding. Quantum phase is also a perfect analog for how people feel about themselves as well. Of course, all of reality is made up of quantum phase bonds as well as conflicts and there also does seem to be phase interference, entanglement, and superposition in relations among people.

Quantum phase bonds and conflicts are a common part of our macroscopic reality and the pure quantum phase of light pulses make up an irrational phase exchange bonds of matter. Quantum phase is also an important part of the universe matter pulse, but macroscopic gravity relativity on the cosmic scale does not include the bonding of quantum phase even though microscopic charge certainly does. Things happen when one discrete quantum state transitions to another discrete quantum state in a fully reversible process known as wavefunction collapse. Quantum reversibility creates an irrational causal confusion for time direction that irreversible macroscopic reality does not have. Macroscopic things always happen somehow irreversibly and seemingly without regard to the irrational quantum phase and in fact our notion of time emerges from the irreversible entropy that results from large numbers of matter actions.

The key to the irreversible nature of macroscopic reality is with the decoherence of any quantum phase entanglement. Phase decoherence collapses large numbers of reversible wavefunction superpositions into the effectively irreversible entropy of a large causal set of matter actions. The electron motion in a hydrogen atom is the result of a charge bond with negligible gravity. Nevertheless, two hydrogen atoms at 70 nm separation have their charge dipole-induced-dipole or dispersive attraction equal to their gravity attraction. At 70 nm separation, gravity and charge fluctuations are equal as a characteristic and continuous perturbation in both time and space.

Each hydrogen atom has a quantum phase correlated with the photon emission that formed that hydrogen atom. This means that the two (or more) photons of these two hydrogen atoms have persistent dispersive attractions that we call gravity. The phase correlation of this biphoton means that there will be slight differences in the gravities of atom particles due to each atom’s history. But the averaged gravity of large bodies of matter created together will be very similar. 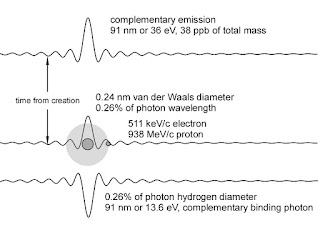 The universe pulse gives a characteristic quantum gravity noise known as continuous spontaneous localization (CSL), which collapses wavefunctions and makes our macroscopic reality real by dephasing matter actions. Normally, gravity is too small to affect charge at a microscopic scale, but the very slow universe pulse fluctuation frequency of 0.255 ppb/yr at 70 nm is sufficient as the plot below shows.

This plot also shows that it will take another 2-3 orders of magnitude sensitivity with gravity wave detectors to finally confirm the mattertime decay of our universe pulse. However, mattertime decay does show up in a large number of other measurements, but those measurements are invariably complicated by classical noise. Note that it is the very slow quantum fluctuations in the universe pulse, 0.26 ppb/yr, that collapse wavefunctions at 70 nm, but the dephasing of quantum wavefunction collapse occurs everywhere in the universe. 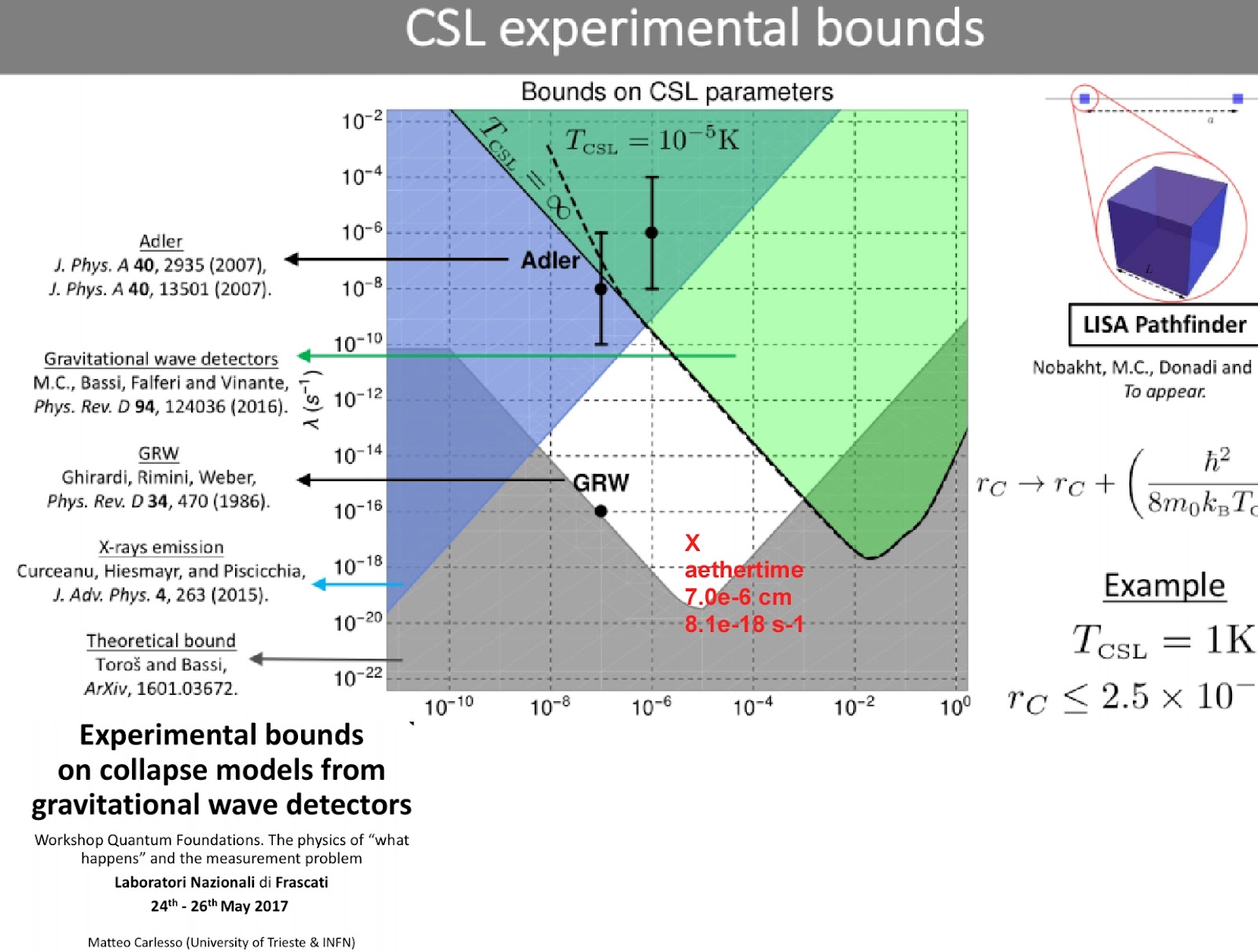 Matter decay and force growth are everywhere and in everything that happens. Here is a plot of the mattertime decay versus frequency for a large number of periodic events. Pulsars are rotating neutron stars that show very characteristic pulsing as well as decay and pulsar decay follows the mattertime decay line. However, pulsars also decay by radiation of light and gravity and so this complicates the interpretation as a universal decay.

The Allan deviation of atomic clock synchronisation also follows the mattertime decay line as well as the earth spin decay and the moon-earth distance, as well as the approach of Andromeda galaxy. Of course, this could all be just a coincidence, but it does mean that the electron charge radius, re, does decay and therefore the electron spin period as well. 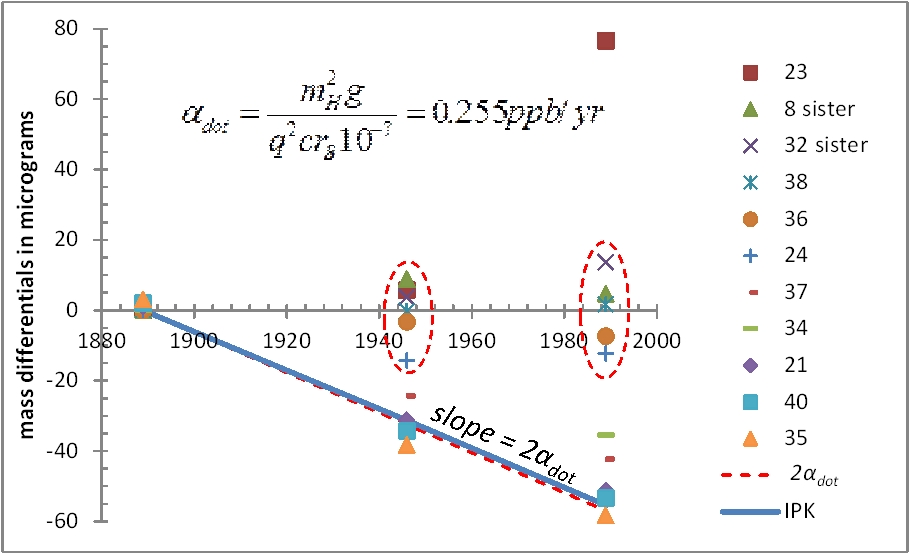 The decay of earth’s day in the next plot includes a very much greater annual variation from 1963 to 2015. There are large annual fluctuations of several ms as well as a long term decay that is consistent with 0.26 ppb/yr. However, most of the variations are due to perturbations of the moon and planets along with tidal heating of earth’s oceans also occurs and this complicates the interpretation.

Thus the quantum dephasing decay of the universe pulse makes our macroscopic reality real and yet still consistent with our surreal quantum time confusion. Quantum phase does have macroscopic effects as light polarization and interference, but very large bodies have all dephased and therefore do not show quantum phase effects.

The universe pulse is after all the pilot wave that guides all light and matter action. Pilot wave or de Broglie-Bohm theory is a deterministic quantum mechanics that creates hidden variables as pilot waves to guide all matter particles, not wavefunctions. However, the universe pulse as a pilot wave and so does not introduce any hidden variables since that is just the way the universe is. Thus, the relativistic gravity Hamilton-Jacobi equation becomes the basic equation of motion as a quadratic and relativistic form of the quantum Schrödinger equation. The Klein-Gordon equation is also a quadratic and relativistic form of the Schrödinger equation and is the basis for quantum field theory and the standard model of particle physics.
Posted by steve agnew at 8:29 AM No comments: