1) In contrast to the dependence on radius for Newton's gravity orbit velocities, galaxy rotation velocities are constant do not depend on distance from the galaxy center. Science explains this discrepancy by adding a cold, dark halo of invisible dark matter around each galaxy disk.
In the matter-action pulsed universe, universe matter decay determines gravity and so the extra matter decay as star radiation results in a star matter waves. These star matter waves couple star motions as a vector gravitization that is consistent with radial independent galaxy rotation as the plot shows. 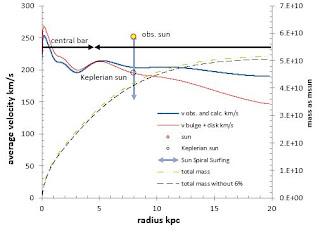 2) Star matter waves couple into galaxy spiral density waves that periodically decelerate and accelerate the orbit velocity of the Sun in its orbit around the galaxy. 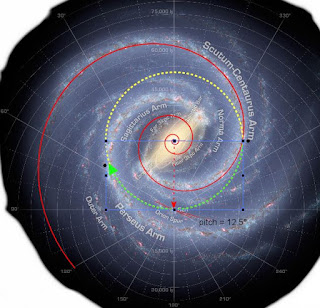 3) Moreover, the galaxy spiral matter waves correlate with known matter extinctions as the plot below shows. 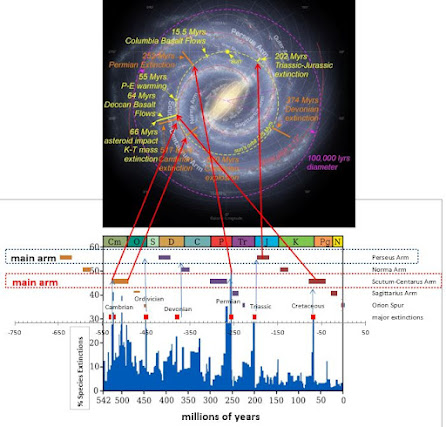 4) The discrete aether pulse universe is in mass decay and therefore also in force growth, which means that measuring mass with an action will not show either matter decay or force growth. However, certain kinds of measurements of mass do show the decay and the international kilogram standard, IPK, has decayed over the last 100 years relative to its many secondary standards as the plot shows.
The secondary standards are routinely cleaned with use and the cleaning process results in adding mass so as to keep the secondary standards constant mass. The IPK primary is not subject to the same periodic cleaning and is only been used three times as the plot shows. The matter decay of the IPK matches that of the pulsed universe, which is the collapse of aether equivalent to charge force. 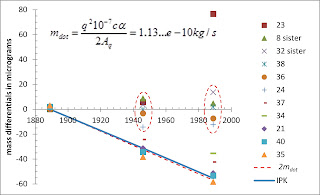 6) There is a universe pulse decay line that is consistent with many measurements of decay at the slope of 0.255 ppb/yr. In particular, the msec pulsar decays, earth spin decay, earth moon orbit growth, and Andromeda galaxy to Milky Way galaxy separation decay.

7) The sunspot cycle has been measured for 400 years as a 11.6 year variation in sunspot number per month as the plots below show. There is currently no explanation for the sunspot cycle, but with the universe pulse decay, there are matter waves associated with the star decay.
Star decay produces star matter waves that couple the motions of stars with a vector gravitization much like charge motions are coupled with vector magnetization. The two stars, Procyon and Cygni-61, are both 11.6 lyrs away from our sun, which couples their motions and affects the Sun’s convection with an 11.6 year period.
Sunspot activity went into a hiatus around 1680 as the plot shows, which is consistent with the Cygni-61A/Cygni-61B periapsis or closest approach at that time. Cygni-61 is a double star and so its double star orbit plays a role in the sunspot activity of our Sun. Thus, the 678 yr orbit of the Cygni-61A/B double star will reach apeosis again in the year 2358. The Procyon A/B double star has a 40.8 yr orbit and shows up as a 40.8 year shift in sunspot peak and intensity. 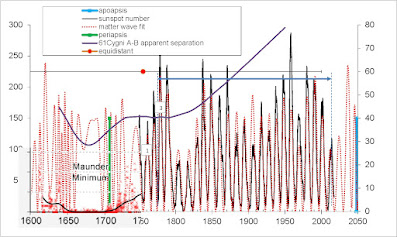 8) The spectrum of muonic hydrogen in the plot does not agree with predictions from quantum theory and H spectroscopy shown shifted in the plot. However, the muon lifetime is only 2.2 micros and in the discrete aether pulsed universe, the short muon lifetime is an increased matter decay rate that shifts its spectrum as shown. With the muon decay rate included, the muon and hydrogen spectra now agree as the plot shows. 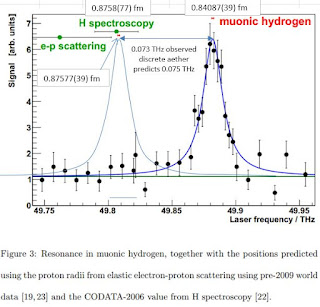 9) Since matter decay is equivalent to a force, discrete aether predicts that a matter decay of 83 MW/kg is equivalent to the 1.0 G force of earth’s gravity. The sun radiance is just 1.9e-4 W/kg and it would take a 1 kg U reactor pile 12,000 K to achieve 83 MW/kg. This is equivalent to a 1 kg U shell 22 m diameter radiating at 1,000 K, which is below the U melting point.
10) Matter decay couples the Sun radiance to the galaxy spiral density waves to accelerate the Sun to its present 251 km/s from the 204 km/s spiral wave velocity, and increase of 47 km/s over 49 Myrs. This is an average force of 4.1e-7 G that acts over 49 Myrs and predicts that a radiant source can surf on galaxy spiral waves as well.
Posted by steve agnew at 11:33 AM No comments: