Interviews of Carroll and Rovelli on FQXi.org

These FXQi interviews of Carroll and Rovelli are both quite interesting since they are two very smart people with related but very different narratives about the nature of physical reality. Measurement guide science and narratives without measurements are really what guide philosophy and such narratives have no role for science. Narratives without measurement guide philosophy and into perpetual discourse among many very smart philosophers about the nature of physical reality.

“Every philosopher disagrees with every other philosopher and so only one philosopher can ever actually be correct.” Paul Skokowski.

These narratives are really mostly philosophy wrapped in the technical jargon and methods of science and therefore these two narratives with and without measurements are a confused discourse. An outcome may be determinate or it may be uncertain, but it is not clear from these narratives which is determinate and which is certain. Carroll links cause and effect and entropy with his multiverses and avoids the conundrum of microscopic reversibility versus macroscopic entropy. Carroll does not suggest any measurements although his choice implies determinism. Classical causality means that both macroscopic and microscopic measured outcomes have precursors, while quantum causality means that you cannot precisely measure all precursors. Rovelli, in contrast, seems to believe in free choice and not in determinism and offers meaning for reality without multiverses.

In fact, observer quantum phase always affects a quantum measurement and it is not possible for an quantum observer to measure their own phase. For most macroscopic measurements, though, quantum phase plays no role in causality since the decay of quantum phase is so fast. However, when quantum phase decay is slow, the superposition of precursor and outcome results in causal confusion since the notion of symmetric time has no arrow.

Neither Carroll nor Rovelli acknowledge the unknowable precursors that result from quantum phase correlation and superposition, but both accept the notions that the universe changes and that outcomes all have precursors. However, they do not discuss the two very different kinds of changes that make up things that happen: First there is the very slow change of the universe due to gravity and the universe pulse dephasing; Second, there are the very fast changes of atoms due to charge.

Mainstream science argues that atoms and forces at rest are constant for all time and so atoms and forces do not change with the slow expansion of the universe under gravity from the big bang. Despite gravity and charge being attractive, the expanding universe therefore only changes space, not matter or action. However, the equivalence of matter and energy in relativity means that mass does increase with motion, and matter-energy equivalence then means that time slows just as matter increases with increasing velocity.

The mattertime universe pulse decay supposes instead that the universe pulse of matter decays very slowly in concert with its very slow growth of the action of force. Not unlike a photon pulse of light. the combination of decaying matter and increasing force give the illusion that the universe slowly expands from a big bang. Universe pulse decay is then consistent with gravity relativity just as gravity force slowly grows. This complementary matter decay and gravity increase gives the illusion that gravity stays constant over time.

The universe pulse illusions of constant atoms, constant force, and expanding space are all very strong and dominate science. Very few in science acknowledge that it is even possible for the very slow decay of universe matter to complement a very slow growth of force, which then gives the arrow of time and is still consistent with mass increasing with motion just like relativity. This very slow mass decay and force growth is what I call mattertime and also means that time and space emerge from change and that entropy of atoms is different from the entropy of the universe pulse. Atom entropy derives from the very fast changes of atom states while universe entropy derives from the very slow changes of universe states, which include atom entropy.

Black holes are endpoints of time and space, but black holes are still subject to the slow changes of matter and action. In mattertime, the universe pulse destiny is a single black hole and that destiny births the next antiverse/universe pulse. The first half pulse is the antiverse expansion that grows with antimatter precursors then the universe second half pulse matter decay outcomes.

In mainstream science, matter condenses first by charge and then by gravity into stars, black holes, galaxies, galaxy clusters, and large-scale structures and those bodies all decay by charge and gravity radiation. All of this decay seems inconsistent with an ever-expanding universe, but all of this observed matter decay is completely consistent with the universe pulse of mattertime decay. In fact, mattertime decay results in a gravitization vector force that couples moving stars and is analogous to the magnetization vector force that couples moving charges. Gravitization is a large scale vector force that, along with gravity, bonds stars into galaxies, galaxies into clusters, and clusters into large-scale structures.

In any case, these two philosophers each believe they are correct and disagree with each other. The last artifact of standards is the kilogram standard and the IPK has decayed by 0.51 ppb/yr over the last 130 yrs, exactly twice the matter decay of 0.26 ppb/yr from the ratio of hydrogen gravity and charge forces times the hydrogen orbit frequency, GmH2/(q2c2 10-7) (c/rB). This is the plot that shows the IPK decay relative to the secondary standards, which average to a constant due to weight gain as a result of their frequent cleaning process. 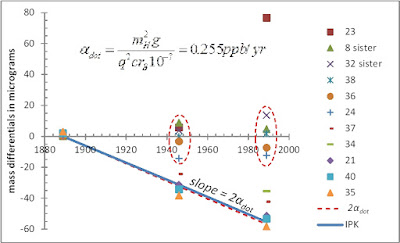 Mattertime 6 is the latest in the mattertime series and introduces the basic axioms of matter action...

https://www.youtube.com/watch?v=Kns4WS7Q9qE
Posted by steve agnew at 10:15 PM No comments: