Emotions that accompany the two main complementary conservative and liberal ideologies of civilization are the complementary emotions of free choice and compassion. All emotions come from the primitive mind and not the rational conscious mind and so emotions are why we feel the way that we feel and are why we do what we do. 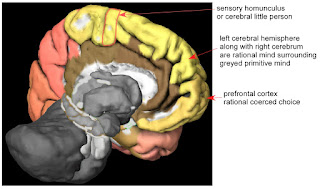 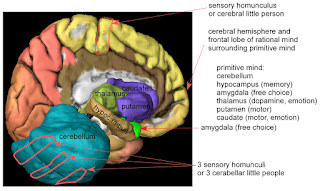 Thus Nazism or Fascism represent an extreme conservative with unfettered free choice by a ruling elite, while socialism or communism represent a extreme liberal with unfettered compassion by a ruling elite and have both demonstrated despotic tyranny outcomes. Despite having complementary feeling precursors of free choice or compassion, respectively, extremes of both conservative and liberal end up as despotic tyrannies. This is also why successful free market capitalism must always tolerate some political and religious dissent and free market capitalisms thus have necessarily more representative democracy outcomes.

The balance between a callous free choice tolerating the feeling of an individual and the compassionate coerced choice of intolerance has been a long struggle for civilization. Ancient China, India, and Rome all achieved some success as totalitarian states rule by the unfettered free choice of their ruling classes and a fundamental acceptance and indeed promotion of the suffering and misery of everyone else. Then, Western Civilization adopted a Judeo-Christian-Islamic ethic that introduced the primacy of individual free choice for most people as a a different feeling with more compassion to reduce suffering for those outside of the ruling class.

In particular, the Judeo-Christian ethic taught that both rich and poor people have the same free choice of grace and salvation and therefore both could reach salvation and heaven by their own free choice. People did not have to accept their suffering and misery, but could choose a different destiny from that of their birth. The Judeo-Christian-Islamic ethic shows the primacy of individual free choice and free choice gave rise to the innovation of technological advances that increased the wealth of all people, including the poor, and gave rise to a middle class as a result.

China’s CCP is a very good example of the unfettered compassion of a ruling class since the CCP uses their unfettered compassion to justify tyranny and intolerance over everyone else. The unfettered CCP compassion considers itself virtuous because it has good intentions for most people, but the CCP cannot tolerate any religious or political dissent and so mercilessly suppresses the free choice of both religious and political minorities. The CCP is now actively suppressing all non-state religions, Uighurs, Tibetans, Falun Gong, Hong Kong, and Taiwan.

All of these examples of one-party rule are at the extremes of either callous free choice or unfettered compassion.