Mainstream physics presumes that the universe of space and time expands, but all matter and force remain constant over time. Except for a very short time during creation as the cosmic wave background matter and force supposedly have not varied. However, in the quantum causal set universe of discrete aether, matter shrinks and force grows and this is the reality of collapsing aether in a causal universe. The collapse of aether along with the expansion of force then agrees with the ever red-shifted galaxies and as a result, represents charge and gravity as one force.

It is matter and action that make up the universe of quantum matter and each successor particle evolved from progenitor matter in a story with very many actions that precede one another entangling each particle with the primal action of creation. That set of progenitor actions and the successor matter of the universe are the two basic axioms of quantum relativity with discrete quantum aether. The action of measurement, for example, observes the universe and is just one of the many successor actions that make up all matter. This means that observation actually becomes a part of the fundamental nature of action and therefore observation is the bridge between an objective reality and the subjective reality of consciousness. 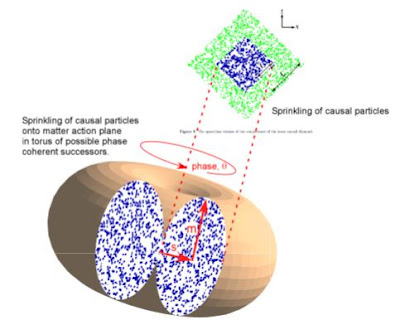 In relativistic gravity, quantum phase has no meaning and both space and time are continuous and infinitely divisible. Quantum gravity, however, includes both quantum phase as well as a discrete matter and action. Quantum gravity actually replaces continuous space and time with a causal set of discrete aether and action and as a result, quantum gravity conforms to Lorentz variance and also conforms to quantum mechanics as the following shows.

In classical quantum mechanics, the standard Schrödinger equation is a differential of wave function with with continuous time proportional to the wave function as

which is valid over a very large range of scales, from 1e-39 to 1e39. At very small or very large scales, it it necessary to use different dimensions than space and time. The nature of the dimensionless wavefunction has, for example, always been somewhat mysterious since particle masses are actually matter wavefunctions that have the properties of waves with quantum phase, entanglement, and superposition and so particles are not just the round balls of gravity matter. It is the mass of phaseless Oppenheimer dust that makes up black holes in general relativity.

A quantum gravity of aether particles Cortez and Smolin 2011 does bridge the gap from the very small to the very large and it is from the actions of aether that both space and time emerge Surya 2018. However, these approaches restate the Schrödinger equation with energy and momentum and have not been quite complete while the approach below with matter, action, and quantum phase is complete for both gravity and charge.

with the intrinsic decay of aether based on charge force as

In this approach, it is now mass defects instead of energy defects that define the Hamiltonian of quantum mechanics, Md.

This means that there are not just one but actually two different time dimensions that emerge from matter action: a very fast atomic time and a very slow universe time. The universe does not exist first of all as matter and action in time and space, but rather first of all in pure matter and action. Time emerges from the successor relationships of aether with progenitors and that relationship represents both gravity and charge, but at very different scales.

which is zero for a bound action and tB is the orbital period. The relativistic gravity Hamilton-Jacobi is then just the norm of the quantum version.

Space and time both emerge from quantum the phase actions of aether matter that give the hydrogen orbit radius as space and the orbital period action as time. The universe then comprises both matter and action along with phase from which emerges both time and space from the matter and action of a causal set of quantum aether. This means that both space and time are a part of matter action and so the quantum aether Hamiltonian incorporates both gravity and charge into a single universal equation of motion.

This restates charge and gravity constants as