CSL Quantum Phase Noise versus the Classical Noise of Chaos

Quantum phase noise is what drives all action in the discrete aether universe and one of the consequences of the decay of quantum phase noise is that both a source and observer mass wavefunctions collapse even while their charge and gravity forces expand. In a related description decay of quantum phase noise, continuous spontaneous localization (CSL) arbitrarily creates a phase noise decay time and characteristic distance in order to collapse quantum wavefunctions for macroscopic objects and reality even without an observer. The CSL assumptions vary, but one proposed decay time is 1e-17 s-1 at a length of 1e-5 cm, which compares very well to the quantum aether values of 0.81e-17 s-1 and 0.7e-5 cm as the figure below shows. In fact, the inverse universe age is 0.23e-17 s-1 and so is also very close to the discrete aether decay time for good reason.

What is really amazing is that a combination of the fundamental distance of 70 nm and time of 3.9 Byrs actually explains wavefunction collapse without any additional parameters. These values come from existing universe constants and so require no further justification. However, the further assumption that this wavefuction collapse also occurs for the wavefunction that represents the universe as a kind of self energy correction. This means that the universe collapse rate is what drives both gravity and the universe scale and charge at the atomic scale.

Unlike CSL, though, the discrete aether decay and length simply arise from the assumptions of a fundamental aether decay from the ratio of gravity and charge forces at the hydrogen atom radius. That time constant can also define the universe age and so there are no new constants in discrete quantum aether...just reinterpretations of some "constants" of mainstream science. The LISA Pathfinder spacecraft helped further bound the universe collapse rate and size along with the gravity wave detectors as the figure shows. 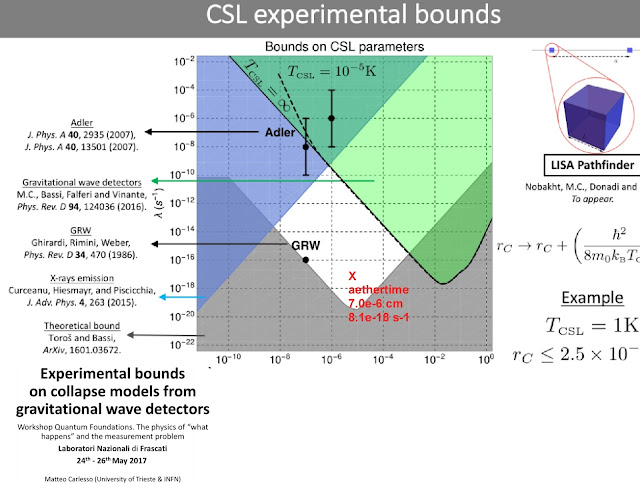 Thus, the very nature of discrete quantum aether shows the inherent property of phase decay and phase decay drives both gravity and charge forces just at very different scales. The Hubble constant in aethertime is just simply H = 𝛼dotc, the product of the aether decay and the speed of light in this epoch.

Here is a graph that shows the decay of the international standard for mass, the IPK, over the last century or so relative to a series of sister standards that are used for calibration. Primary and secondary standards are carefully cleaned before each use in a rigorous procedure that does alter the standard's mass. Therefore specialists have carefully designed a cleaning procedure that does not change the mass of these secondary relics and as a result, the secondary standards on average do not change mass. However, adjusting the cleaning procedure can therefore hide the intrinsic decay of matter.

In contrast to the fixed mass of the sister standards due to cleaning, the IPK has only been cleaned and measured the three times as shown and so the IPK shows the decay of mass predicted by the universal mass decay constant, mdot, as shown. The mdot equation depends on the fundamental constants of charge, q, speed of light, c, fine structure constant, α, and charge cross section, Aq. The mdot constant represents a fundamental aether decay of the universe that drives both charge and gravity forces. Ironically, while mass decays, charge and gravity forces grow in contrast to the prevailing notions of mainstream science. 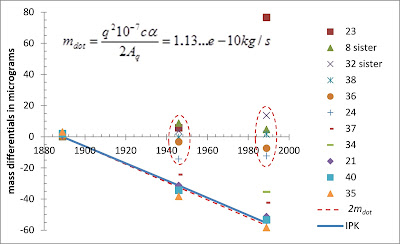 Classically, there is no way for matter to decay by decoherence although mass is equivalent to the energy of light and so mass can transform into light and light back into mass as well. The transient species called positronium is a bound state of an electron with its antimatter positron decays by quantum phase noise into two photons of light after less than a microsecond. By the principles of microscopic reversibility, two photons can collide and produce postronium or indeed many different kinds of matter.

However, classical matter cannot decay by quantum phase decoherence into nothing since there is no classical meaning for quantum phase noise. Thus the classical universe is in some sense ultimately driven by noise and not by purpose. The butterfly effect is a an example of classical noise from the flapping butterfly wing and that even that slight noise can effect the course of a hurricane. Noise is what limits the precision of any measurement of a source property and when the fluctuations of noise dominate purpose, the noise of classical chaos drives purpose, not choice.

A person's success in life is obviously due to a superposition of past choices and actions. However, a focus only on the past suggests that any success in life would be due to blind luck of birth and that even further back, it is the blind luck of creation that would determine a destiny of any success in life. This classical and determinate notion of fate or karma presumes free will is an illusion because it is only the superposition of the past that determines all choice for any action. Of course, the chaos of noise does still limit the precision of measuring action and so even a determinate future can still be difficult to predict with certainty.

A person's success in life, though, is not just due to a superposition of past choices and action, but that success is also due to choices from a large number of possible futures as well. What makes up a person's success or any action is then a superposition of both the past and the future possibilities and so any particular future is not then determined only by blind luck or birth or creation. We choose a future by the action of free will and the entanglement of free will is not an illusion of the chaos of classical noise. Instead the action of free will emerges from the noise of quantum phase entanglement.

Another example of the decay of quantum phase noise is for thousands of rotating neutron stars known as millisecond pulsars. This figure shows that the average decays of several thousand millisecond pulsars decay the same as the IPK.

Yet another example is the average decay of earth's spin as shown below. Although there are many classical and chaotic actions that effect earth's spin, it is interesting that the earth's spin decay seems to be at least in part consistent with the decay of the IPK as well as the decay of the millisecond pulsars. From 1971 to 2015, there have been 25 leap seconds over these 44 years, which is 0.18 ppb/yr, which is very close to the quantum phase decay of 0.255 ppb/yr as the figure shows.

Although ocean tidal friction is often assigned to this value, tidal energy seems to be only 1.7% of the earth spin energy decay. Given an ocean surface area of 3.6e14 m2 and a mean tide height of 0.6 m, the tidal energy is 2.5e15 J/day for two tides.

In fact, there seem to be any number of measurements consistent with the quantum phase decay, which also comes with a complementary universal force growth. In fact, in order to be consistent with the Hubble galaxy red shift, force must increase with decreasing mass in this epoch of the universe.