The muon form of hydrogen is a hydrogen with a muon instead of an electron in orbit around the proton. The muon charge is the same as the electron, but the muon mass is 207 times that of hydrogen but decays very quickly with a lifetime of 2 microseconds. Even with a short lifetime, the quantum correction should yield the same proton radius for both electron as well as muon hydrogen. Instead, the proton radius is much different for muonic hydrogen as the figure shows. 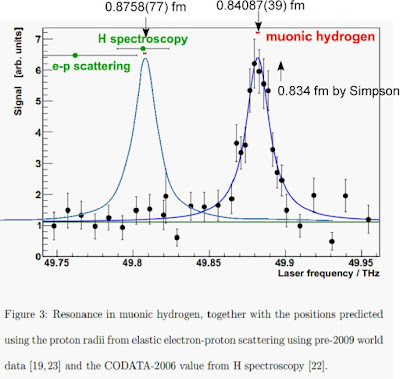 There are other calculations that show the proton radius, but neither of them seems very realistic since they do not depend on the progressive perturbation of approximations that help define reality.

Each of the electron and muonic spectroscopy results are valid by mainsteam science and are determined within mutually exclusive uncertainties. There is therefore not a single proton radius and neither explanation is more valid than the other.

Thus, there is a dilemma. What is the real proton radius...0.8758 or 0.84087 fm? Both measurements of atomic hydrogen and muonic hydrogen appear to have sufficient precision to preclude each other.

which the figure above shows as 0.075 THz versus the observed 0.072 THz, now well within the precision of both measurements.

Note that Gary Simpson has reported a quaternion calculation that shows a similar radius to muonic hydrogen, but far different from atomic hydrogen as the figure shows. Since no error measure was cited, it is not clear what this calculation means.

Posted by steve agnew at 9:20 PM No comments: