There are precursors for space and time outcomes in the agency and free choice that all, of course, simply exist in a quantum causal set. However, there are many outcomes in a quantum causal set that have unknowable precursors even though those precursors do also exist in the causal set. There are unknowable quantum precursors that make quantum outcomes fundamentally uncertain and therefore subject to the free choice of conscious agents in our quantum reality. Nevertheless, the collapse of quantum phase coherence means that some outcomes are still much more likely than other outcomes and that is the basis of the largely determinate classical reality of complexity and chaos. 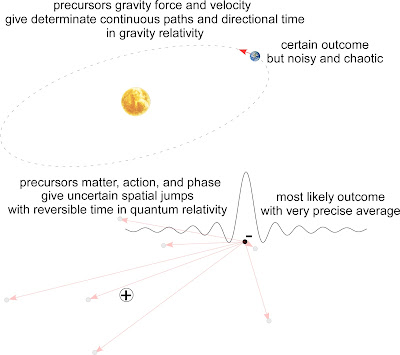 However, uncertain quantum outcomes mean that the universe is not really determinate after all and so given quantum uncertainty, even beyond complexity and chaos there are still fundamentally uncertain outcomes with unknowable precursors. The key difference between the outcomes of the determinate relativity of gravity and the uncertainty of quantum outcomes is in quantum phase. While the single photon exchange of quantum charge results in uncertainties in noncommuting position and momentum, the biphoton exchange of quantum gravity results in uncertainties in anticommuting position and momentum.
The uncertainties of quantum gravity anticommute instead of noncommmute and anticommutation does not alter the geodesic paths of relativity, but does affect relativistic matter and action along that path. It is then the collapse of precursor quantum phase coherence that defines all quantum outcomes, gravity and charge. It is only incoherent light and matter action that make up the determinate outcomes of gravity relativity while quantum light can remain indefinitely entangled with its matter action outcomes.

Posted by steve agnew at 7:48 PM No comments: