A single photon resonance between emitter and absorber chromophores exists as a cosmic time packet that grows and then decays, which defines its time packet. Atomic time and space emerge from the quantum oscillations of that photon burst from the speed of light and its wavelength. The growth and decay of the photon packet define its location and direction and result in the Lorentzian spectrum that this example shows. The arrow of time emerges as the direction from primordial emitters to black hole absorber destiny outcomes.

The universe itself is then a spectrum of aether whose exponential decay defines not only a cosmic time, but also defines charge, gravity, and all forces along with the quantum oscillations from which atomic time and space emerge. 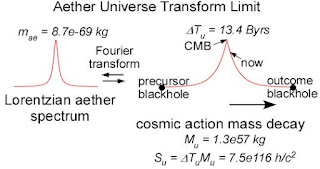 The cosmic microwave background (CMB) is the first light of creation as a result of a small fraction of aether condensing into hydrogen and other primordial elements. The primordial elements, along with their electrons, protons, neutrons, and neutrinos are what begin the action of the single photon resonances from which the universe evolves.

Posted by steve agnew at 7:27 PM No comments: