There are really two very different approaches for predicting how things happen in the universe; classical determinism with its knowable chaos and quantum probability with its unknowable phase noise. Classical predictions are very familiar and are the typical ways that we experience the universe and every classical effect has a knowable classical cause. Quantum predictions can be quite different from classical predictions since quantum actions happen with only likely and not certain causes and therefore not absolutely knowable. The challenge for this new quantavangelism is to promote the belief that some things happen for unknowable causes.

In a classical determinate prediction, observers and sources are completely interchangeable and all things happen with fundamentally knowable, albeit sometimes very complex and chaotic, causes. Although the chaos of classical noise does limit even what a classical observer can know, in a determinate classical universe, everything happens because of a knowable cause and even noise is ultimately knowable. Gravity action is largely classical and so how we perceive the world is also largely classical and so it is quite natural to suppose that is the way the universe must be as well. However, quantum logic tells us otherwise...

An electron always exists in a superposition of up and down spin states in an orbit around a nucleus as shown is an example of the duality of classical and quantum predictions. Classically, the electron has a knowable path as an orbit around a nucleus, but the quantum path of the electron has both wave and particle properties. The quantum electron exists in symmetric sphere around the nucleus in an S orbit is a superposition spin state, but the spin state exists in one side of a charge plane in a P orbit as up and the other side as down. 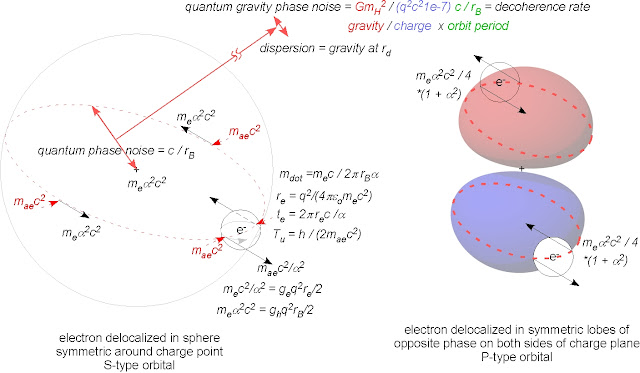 Excitation of the electron into each successive orbit reduces the classical electron velocity by a factor of two and therefore its kinetic energy by four until eventual ionization. The complementary capture of an electron into the S ground state occurred with the emission of a photon and that photon phase entangles the spin phase of the electron. Since the universe is actually not classical, quantum observers and sources are not interchangeable for quantum probabilistic predictions.

In other words, a quantum observer of an electron path or spin cannot predict a precise but only a likely quantum future for that spin. Quantum observer and source are inextricably entangled in the surreal quantum world. Although the chaos of classical noise also limits what a quantum observer can know about a source, in addition, there is quantum phase noise. Unlike the chaos of classical noise, quantum phase noise entangles an observer with a source in ways that the observer cannot ever know. Fundamentally this means that there are quantum effects for an action that do not have knowable causes.

Things happen in the universe because of the actions of both classical gravity biphotons and quantum charge photons. Since gravity biphotons and charge photons are very different magnitudes of force, mainstream science treats them as two very different forces and this also means that there are two very different kinds of observers; one for classical gravity and another for quantum charge. Without a unified photon exchange force that explains both gravity and charge, a classical observer will not see a source the same way as a quantum observer sees the same source.

Posted by steve agnew at 6:46 AM No comments: