Our Subconscious Free Will

It is now well established that we make decisions based on irrational subconscious feeling and not based on conscious rational reasoning. Perhaps the most compelling evidence is that of the delay between when we are conscious of a choice and when that choice shows up in the brain MRI. However, it is not then true that we do not have free will or free choice despite the fact that our subconscious and not conscious mind determines choice. Many people argue that since subconscious decisions are based on irrational feeling and not based on rational reasoning that we then do not have free choice and our choices are all somehow persuaded by a determinate universe.

However, how we feel about things and therefore how we make choices derives from a spectrum of emotions that in turn arise from a spectrum of subconscious archetypes of free choice. Free choice involves a recursion of thought, memories, and feeling and archetypes are what we believe in and expect and are what affect our emotions and therefore feelings and memories. Some of our subconscious archetypes are innate but they are by no means completely fixed and constant and constantly evolve in life. As other people and things that happen persuade us to believe differently, so our beliefs evolve as a result of the persuasion of others and how they act. Instead of directly perceiving reality, our archetypes provide a template of what we call perception and we respond to things that happen with emotions and feeling. Irrational feeling then determines how we make free choices and why we have free will.

The technical reason that we have free will is that we actually cannot always know the reasons why we make the choices that we make even though those reasons do exist. What we do is first make a choice based on our subconscious feeling and then we rationalize that choice with conscious reasoning that may or may not have had anything to do with our choice. In very technical terms, we each live in our own subjective quantum universe of matter, action, and phase and while matter action is how things change, quantum phase is also a part of how things change and we also have quantum phase that affects how we feel. In fact, the very nature of neural action potentials has to do with quantum phase so our quantum phase affects how we see matter action and then also how we perceive reality.

A large number of classical events like flips of a coin toss or neural action potentials, necessarily also entangle quantum phase noise. This is because even though a macroscopic event entangles only very small amounts of quantum phase noise, large numbers of such events by design do. While a classical event is never really random, a quantum event is truly random in the sense that quantum is not predictable with arbitrary precision.

The outcome of a precursor superposition is not precisely certain and neural superpositions exist for only very short times. Once we make a free choice, the outcome follows even though the precise precursor remains uncertain. 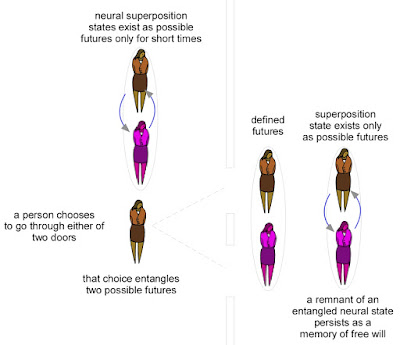 One of the most important free choices we make is the balance between the conflict of individual free choice and the bonding of compassionate social responsibility of coerced choice. We actually need free choice to survive even though it leads to conflict and we need as well as some compassion to bond with others, cooperate, mate, and have a family. Our subconscious archetypes are how we perceive the world as well as how we feel about what we perceive. Although some archetypes are innate, we learn most archetypes from the many narratives that we see, hear, and feel as well as in how we see others act, since we often then act like we see others act. This is all part of the mystery of free choice.

Posted by steve agnew at 1:34 PM No comments: