The main reason for dark matter is to explain the constant rotation of galaxy stars, which contradicts simple Newtonian gravity. Orbital velocity under just Newtonian gravity is proportional to the square root of orbital radius whereas galaxy stars tend to rotate with a constant velocity independent of their orbital radius. However, the collapse of discrete aether leads to an additional vector force for Newtonian gravity given star decay, gravitization, that couples moving star decays to each other and results in constant galaxy rotation without any need for extra dark matter. Essentially, gravitization transfers angular momentum by slowing inner bulge and accelerating outer disk stars.

Analogous to the magnetization of moving charge that is electromagnetism's vector force, gravitization is gravity's vector force. Stars radiate energy and therefore their matter decays and the product of that matter decay with the star velocity results in the additional force of gravitization. Gravitization does not need any further constants or parameters, just the simple assumption that gravitization exists is sufficient to explain the constant rotation of galaxy stars. 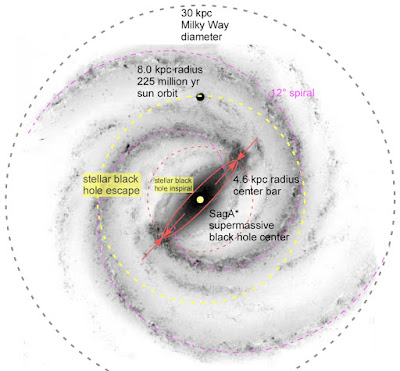 The Milky Way supermassive black hole is about 4.1 million solar masses or about 1.6 million average stellar black holes given the lifetime of the galaxy. Since bar-spiral regions are nurseries for new stars, the bar-spiral nursery tends to stabilize the inner bulge stars into a bar. The stellar black holes in the other parts of the inner bulge, however, spiral into the center and tend to keep the bulge outside of the bar clear.

Most Type IIa supernovas become rotating neutron stars with average mass 2.2 ms and when neutron stars rotate just right, they generate pulsating radio signals called pulsars. Pulsar timing then provides many details about distance and velocity and pulsar velocities are the main evidence for the existence of supernova velocity kicks. Thus far, it is assumed that there is some kind of asymmetry in the supernova due to some combination of asymmetric mass ejection, neutrino radiation, or electromagnetism. But the source of that instability is not well understood.

Of course, discrete aether decay provides a very simple explanation for supernova velocity kick since the energy of the supernova flare results in a force that takes angular momentum from the rest of the galaxy. The the total supernova energy equivalent matter is about 0.11 ms, which is only about 16 km/s kick for a 2.2 ms neutron star as compared to the 400 km/s average kick reported. However, this initial acceleration by gravitization could then seed an instability in the mass and neutrino emission that results in the complete velocity kick.

About 1% of type II supernovas are from very large mass hypernovas and the energy released by hypernovas could accelerate the remnant neutron star by gravitization to 400 km/s and more. Once the supernova leaves a remnant larger than 2-3 ms , instead of a neutron star, a black hole results. Gravitization will result in reduced kicks for outer bulge large mass supernovas as well as less retardation for inner bulge supernovas.
Posted by steve agnew at 8:15 PM No comments: