The Wonder and Glory of the Pulsed Universe 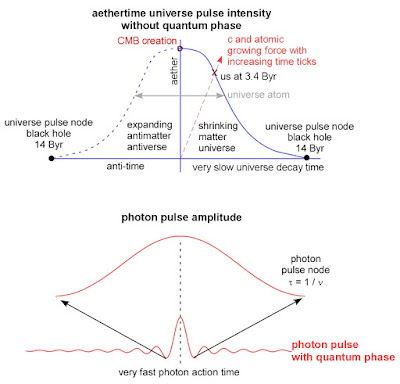 We know that we are in a shrinking universe of growing force because of the many different measurements of matter decay along with force growth. The kilogram standard has decayed over 130 yrs, the earth day has decayed over 50 years, atomic clocks all dephase at characteristic rates per atom, and pulsars all show a limiting frequency decay.


We know that we are in a growing force universe because the Hubble galaxy red shifts occur despite the universe of shrinking matter. The further wonder is that all of science is completely convinced that the universe expands and does not shrink at all. Relativistic gravity is simply a manifestation of a shrinking universe of quantum matter.

The universe matter pulse complements the photon pulses that bind matter and result in quantum gravity as well. An exchange spin = 1 photon binds each electron and proton and has an emitted spin = 1 photon with complementary phase. These spin = 1 phase complements result in a spin = 2 biphoton or graviton whose exchange with other matter biphotons is quantum gravity. Since gravity biphoton exchange does not depend on quantum phase, gravity is always attractive and therefore unlike photon exchange, which depends on quantum phase.