On the Need for Compassionate Selfishness

Humanity uses good and evil as notions of what is right and wrong behavior, but compassion and selfishness are much more useful notions for actually predicting how people act. While compassion is what tends to bond people together into cooperative families, clans, villages, cities, and countries, selfishness is more often what conflicts people with each other or groups of people with other groups of people. With compassion, people cooperatively share the wealth they have acquired and with selfishness, people put their own survival first and acquire wealth more for themselves. 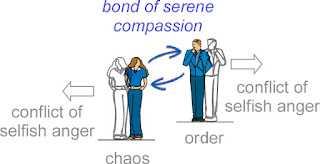 There is a long history of the emotions of love and hate and many religions tout love as the most important emotion for bonding people together. Hate as the complement to love engenders the conflicts that people have with each other and there is an ultimate evil in hate. Since hate is always undesirable, the emotions of love and hate are more limited compared to compassion and selfishness for predicting how people act.

Religions usually promote various supernatural agents for good compassion and other evil agents for  selfishness, but really compassion and selfishness are both part of the dual representations for how the universe works; relational and Cartesian. A relational person is compassionate and relates better with and cares more about others and is therefore a person who is on a common journey with many others. A Cartesian person is more selfish and cares more about themselves than other people and selfish people are therefore more separate and alone on their own objective Cartesian journeys. Just as a relational person subjectively bonds with many other people in a common journey of compassion, Cartesian people are largely on their own objective selfish journeys and only weakly interact with other people.

The complements of each emotion form five emotion pairs that represent the basic duality of matter and action. While compassion represents the matter and bonding of feeling, selfishness represents the action and conflict of the inhibition of that same feeling. Compassion is then the inhibition of selfish action and compassion bonds people together while selfishness is the excitation of selfish action where people conflict.

In our brains, excitations and inhibitions of neural action potentials represent how we feel and form the EEG spectra of brain waves as the figure below shows.  In the spectral reality of the universe, the basic phenomena of consciousness are discrete particles of neural action called aware matter that bond into larger aware matter objects called thoughts as neural structures in the brain. Thoughts resonate as the EEG spectra of the brain and are the matter or feelings that bond two people and that bonding likewise results in further matter spectra that show those relationships.

Science does not yet understand how neural action results in the consciousness of EEG spectra, but sleep is a very important part of neural action. In fact, there are two primitive neural matter packets during sleep that appear in sleeping EEG called K complexes and sleep spindles. Both K complexes and sleep spindles are made of delta mode packets and the delta mode is the fundamental mode of neural action. The EEG K complex seems to be the simple delta dimer while a sleep spindle seems to be a delta dimer with an alpha mode carrier and both are the basic primitive neural packets that appear during deep sleep. These primitive neural packets appear to be what keep our mind asleep and yet they also represent the basic neural aware matter that binds or conflicts us with others as well with compassion and selfishness.

Compassion and selfishness are therefore the two most important emotions for bonding and conflict and people actually have both compassionate and selfish feelings in all journeys in life. Compassion and selfishness are much more useful than love and hate for describing the complexity of relationships. Bonding relationships come about from pleasurable neural excitations and result in delta dimer bonds that inhibit anxiety. Conflicts among people inhibit pleasure and excite anxiety, which is the alpha carrier mode.

Governments balance compassion, sharing, and cooperation with selfish actions and that balance allows competition to promote commerce and innovation. The markets of commerce permit people to act selfishly and trade for goods and services that not only meet the selfish needs of survival, but also provide goods and services for others as well in a form of compassion. The government builds roads, transportation, buildings, parks, and social welfare represent the compassion of public resources shared for all.

Posted by steve agnew at 7:59 AM No comments: