Every hydrogen atom in the universe is the progeny of the action of progenitor electrons and protons that also created a photon progeny with entangled quantum phase. The creation of every hydrogen atom and photon was nearly but not completely reversible and that photon progeny has some probability therefore to annihilate an atom by ionization as well. In this case, entangled electrons and protons would then also be the progeny of an atom and a photon and yet the first light of creation is primal and axiomatic.

The simple aether, action, and phase of the CMB creation are the primal progenitors or dimensions of the universe and space and time both emerge from the progenitor actions and of matter and phase progeny. Space emerges from the average action radius of an atom, rB, which comes from the atom mass, mH = mp + me + mR, and the Schrödinger equation that relates that mass to an action. Time emerges from the action of the electron and proton, sB =2 rB tB, as the orbital period, tB. Direction in space emerges from the relative phase between different matter actions and in a similar manner, the mass and action of aether, mae and sae, make up all matter. There is also a fundamental phase 90ᣞ relationship between the matter and action of every progenitor that is the uncertainty principle for charge, [mae,sae] = -i, for exchange of the spin = 1 photon between spin = ½ electron and proton. The uncertainty principle for gravity then becomes mae2,sae2= -1 for gravity exchange of the spin = 2 biphoton between spin = 0 para hydrogens. 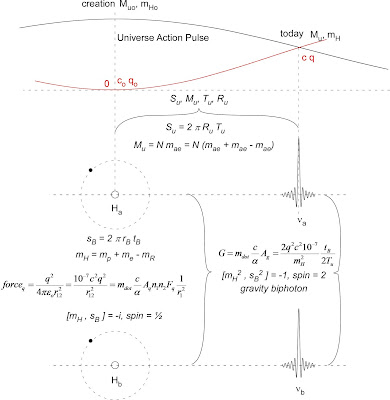 Posted by steve agnew at 9:09 PM No comments: