Continuous space and time are both infinite divisible, which is a consequence that dates back to the Greek philosopher Zeno as well as to many of the other ancients. The Chinese Dao presumes the infinite divisibility of space and time is in the qi or flow of energy among objects from yin to yang, earth to space. The Indian Vedas detail this infinite divisibility with the notion of Vishnu, who connects objects created by Brahma to those destroyed by Shiva in a perpetual cycle of reincarnation. The Buddhist dharma or teaching is that the infinitely divisible connects nirvana or heaven to the sangha or believers. And Christians teach that the holy spirit is an infinitely divisible connection between a father in heaven to a son on earth.

The ancient Greek philosopher Democritus declared that objects are not after all infinitely divisible but rather objects are made up of finite atoms. Today science instead concludes that quark pairs are the finite particles that make up all matter, but this is consistent with the notion of finite and not infinite divisibility. Presuming that the universe is likewise not infinitely divisible means that the universe is made up of some kind of finite aether particles.

As a result, the universe is not therefore made up of empty space that is filled with a finite aether, rather the universe is made up of a finite aether from which emerges the notions of continuous space and time. A black hole is an object of matter that exists within continuous space and time and the logic of general relativity works only up until the space and time of the event horizon of a black hole, which is its spatial surface. As a result, the inside of a black hole does not make any sense in general relativity.

In the logic of aethertime, a black hole exists with a mass, a time delay, and an action or motion relative to an observer. Motion in this sense is the matter equivalent change and motion through space as velocity emerges from the matter equivalent change of objects. Without an empty space to fill with objects, there is no sense to an inside versus an outside since the entire black hole simply has the single property of one time delay, one mass relative to an observer, and one matter change, its spin. 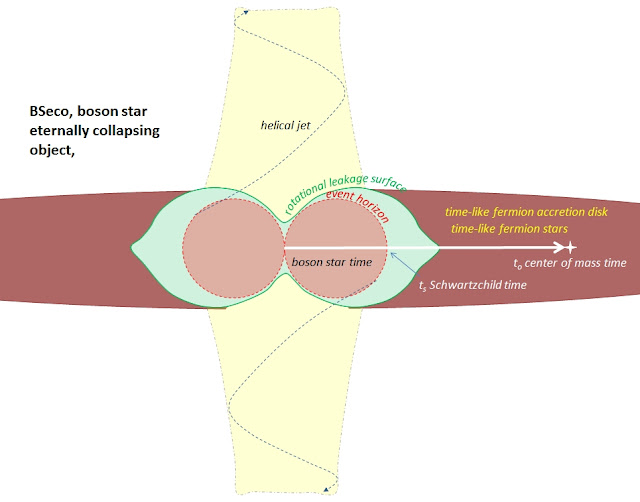 Given the limited notions of continuous space and time, it is the way that a black hole spins that captures all of the information of objects that accrete along with black hole mass, time delay, and matter equivalent velocity. But in aethertime, all black holes have angular momentum and therefore exist as a centered torus as the figure shows. Similar to the electron spin that represents all of its fundamental properties, black hole spin represents all of its properties as well.

Notions of continuous volume in space and continuous time come from the different time delays that we measure from different parts of an object. Although all objects invariably do spin, spin in general relativity is a simple manifestation of the conservation of the angular momentum of the objects that it accretes.

Since a black hole is fundamentally a pure quantum object in aethertime, the phase coherences of the black hole's precursor's electrons, nuclei, and quark pairs represent all of the rest of the information that made up those precursor objects along with mass, time delay, and matter equivalent velocity.
Posted by steve agnew at 12:48 PM No comments: