John Horgan recently wrote about the twilight of science's high priests, two of whom are Stephen Hawking and Martin Rees. Horgan is a longtime predictor of the end of science and often decries the lack of any progress in particle physics as a key example. Horgan likes to pick on particle physics since like many other writers, Horgan presumes that particle physics is representative of all science.

However, particle physics has mainly to do with the nature of matter and action and since matter and actions are finite and limited, particle physics is therefore also finite and limited. For example, once science identified all of the elements, that science was done even though science continues to synthesize more and more exotic and unstable elements with shorter and shorter lifetimes. However, science has been making compounds with the stable elements and Mother Nature has been making all kinds of life with those elements. Science has a never-ending task in taking apart the never-ending molecules of the chemistry of life.

Nuclear matter, just like the elements, is also finite and largely exists as just electrons, protons, and neutrons at the very low energies of life on earth. Physics creates never ending new particles and forms of matter with both very large and very small energies and once science measures the simplest particles, that science is done even though science continues to synthesize never-ending and more exotic particles and forms of matter.

aware matter as a new state of matter

My second read of Mind-Body Problems was even more rewarding than was my first read. This is because there is a great deal of information embedded in the many layers of Horgan’s stream-of-consciousness style of writing. A recurring theme in each of the nine plus one narratives reveals the precursors of free choice, morality, and the selves of each of ten people; nine interviewees plus the author.


The ten narratives represent a spectrum of free choice showing the range of five personality complements or factors (the five factors model): nonconformer versus conformer, conscientious versus impulsive, agreeable versus assertive, social versus individual, and anxious versus confident. Likewise the spectrum of free choice also shows the five emotion complements: compassion versus free choice, joyful versus miserable, serene versus angry, pleasure versus anxiety, and pride versus shame. These people are all well-published with high IQ’s and so do not represent either conformers or impulsive personalities, but do represent all the other personality factors and emotions fairly well.

The one sore point in particle physics, though, is that gravity and charge are still not compatible with each other. While relativistic gravity provides determinate outcomes and a certain directional time, quantum relativity provides probabilistic outcomes and reversible time uncertainty. So gravity and charge could not be any more incompatible than they are, but, since they are 1e39 different in magnitude, this incompatibility makes little practical difference in measurement science.

Science is finally reaching a measurement precision that will likely reveal many mysteries about reality. Atomic clocks show a precision and dephasing rate that is amazing and gravity wave detection is now commonplace on earth and will soon be in space as well. Future measurements in space outside of earth's gravity will further show the very small mysteries of physical reality.

The platinum-iridium bar that now serves as science's kilogram standard is the last physical standard based on an artifact. The IPK has inexplicably lost 0.51 ppb/yr mass relative to its frequently cleaned sisters over the last 100 years in just three measurements.  Mainstream science does not yet understand this mass loss and certainly does not believe that atomic mass really decays over time. Therefore, the revolutionary watt balance will replace the IPK as our mass standard and finally show that the atomic mass is actually in decay. 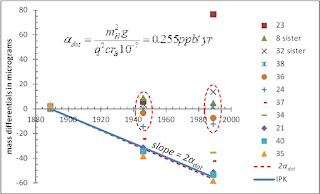 There do seem to be any number of measurements that show the very slow decay of mass as well as the growth of force as a very slow increase in the speed of light. These effects are about two or three orders of magnitude beyond the precision of current science. Another example is in the measured shift of muonic hydrogen resonance from that expected from quantum theory. As the figure below shows, the muon decay adds a small shift that then agrees with quantum expectations. Matter decay leads to an energy shift just as matter decay is the source of all force. 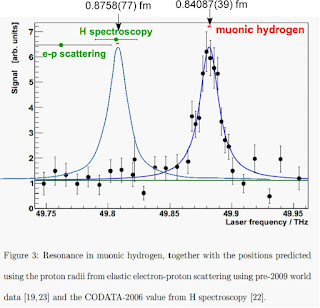 Posted by steve agnew at 9:40 PM No comments: