Knowledge, Intuition, and Reason...What is Not False and Not True...

Intuitive maths tells us not what is true or false, but rather intuition tells us what is not false and not true as well as what is uncertain. There is an important role for uncertainty in intuition and therefore wisdom and quantum intuition respects the limits of both classical knowledge and reason. While our universe is causal, it is not infinite and not infinitely divisible either and therefore the future is not predictable and free choice is also not predictable. 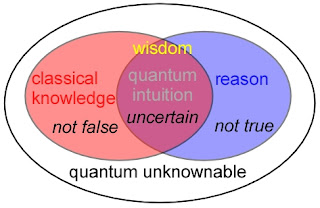 Outside of the realm of what we can know lies the quantum unknown, which is different from things that are simply uncertain and that we only just do not yet know.
Posted by steve agnew at 9:00 PM No comments:

Free Choice Manifesto
The free choice manifesto expresses first of all the universal notion what we call consciousness is equivalent to unpredictable free choice. Furthermore, the free choice manifesto states that everyone is oppressed in one way or another and unpredictable free choice is at the root of all oppression. In interactions with others, someone is the oppressor of an oppressed person in one or more very many different ways. If you voice a disagreement with someone, you become an oppressor and if someone expresses disagreement with you, they oppress you. If you shame someone, you are an oppressor and if you feel shame, someone oppresses. If you are selfish, you oppress socially responsible people and if you are socially responsible, you are likewise oppress selfish people. In other words, oppression of others sometimes results in desirable outcomes just as others oppressing you might also be desirable. Bosses oppress their workers but that work creates wealth and profit and social responsibility and so is desirable. Sick people are a burden on others and oppress those who are otherwise well, but taking on that burden is socially responsible and therefore desirable.

The current Manifesto allure of class warfare once again shows up in our politics. Politicians once again decry inequality of both opportunity and outcome and call for all out class warfare between an oppressed majority and an oppressor minority as the root of all misery and injustice. The Manifesto states that profit and wealth do not belong not to the minority wealthy. The manifesto argues that all wealth belongs to the government and not to the minority who earn that wealth and the government should redistribute that wealth equally to all consumers and workers.

The Manifesto further argues that once an all powerful government removes the incentives of wealth inequality, everyone will somehow benefit from the lack of wealth incentives. However, while the Manifesto discusses at some length the corruption of wealth and profit, the Manifesto does not discuss the undeniable corruption of big government. In fact, the Manifesto never mentions anything about human nature and the large natural variation in human abilities and competencies. Human nature can and does after all corrupt any human enterprise and in fact, social responsibility can corrupt just as much as selfishness. The incentives of selfishness over profit and wealth provide incentives for innovation and innovation and incentives are the key to economic growth as well as the creation of new wealth and social responsibility. In a consumer economy, economic growth is due to both population growth as well as to innovation and an economy with zero population growth must have innovation to grow.

The Manifesto argues that profit and wealth inevitably corrupt the elite minority at the expense of the majority workers and consumers. However, the Manifesto does not ever mention the likewise inevitable corruption of big government, which is an elite minority in power, by the same profit and wealth from the majority workers and consumers. The Manifesto plan in fact resulted in corrupt governments and gave Russia Stalin, China Mao, Vietnam Ho Chi Minh, Cuba Castro, Cambodia Pol Pot, and Venezuela Chavez. In every case, the tyranny of corrupt big government enforced a kind of socially responsible economic equality at the expense of any selfish individual free choice.

George Orwell's Animal Farm in 1945 painted a very bleak portrait of Stalin's Russia but Orwell still supported the Manifesto socialism his whole life. Orwell still believed in the Manifesto even though his later work Nineteen-Eighty-Four in 1949 further showed his disdain for totalitarianism. Despite the ever growing number of totalitarians in modern China that result from the Manifesto plan, government corruption turns out to be by far even more insidious and pernicious than elite corruption. This is because big governments always claim the virtue and morality of social responsibility and essentially eliminate any opposition by incarceration or death.

Inequality is part of human nature and so there is no such thing as an equal outcome economy without corruption...there are only better or worse economies with equal opportunity, but never equal outcomes. In fact, a healthy economy must tolerate a certain amount of inequality in order to allow individual free choice, which is essential for innovation and change. Unfortunately, free choice also means that people are free to make poorer choices as well as better choices, but that is the nature of the Free Choice Manifesto.

Posted by steve agnew at 8:08 AM No comments: