The overwhelming success of general relativity for mainstream science's macroscopic reality of continuous space and time cannot be overstated. Likewise, quantum mechanics represents an even more successful understanding of our microscopic reality of amplitude and phase. All of relativity’s reported successes, though, are really due to the two key notions of mass-energy equivalence (MEE) and gravity time delay of light. Lorentz invariance, the constant of the speed of light irrespective of velocity, simply follows directly from MEE and means that the gravity deflection of light follows from both light’s gravity MEE and the extra time delay of light.

Likewise, it is the quantum coherence of microscopic matter as amplitude and phase that is largely responsible for quantum's microscopic success stories. The quantum story is built upon space and motion, just as is the GR story, but for GR, space and motion do not apply everywhere in the universe while quantum amplitude and phase apply everywhere. In the GR or mainstream science, velocity and acceleration in empty space make up frames of reference from which emerge changes in inertial matter and time delays of light. Gravity affects light once as light’s MEE mass and then again as gravity’s acceleration and red shift and so gravity deflection of light is twice that of just light’s MEE gravity deflection.

Augmenting continuous space, motion, and time with the more general notions of discrete matter and time extends the validity of gravity to all of the universe. In a sense, this means that space and motion actually lie within the the domain of discrete changes in inertial matter and the time delay of light by gravity, not the other way around. In other words, augmenting continuous space and time means that the basic principles of MEE and gravity time delays still apply to that part of the universe. however, the spatio-temporal tensors of GR do not apply outside of the limits of continuous space and time and so a change in inertial matter emerges as motion in spatial frames of reference and it is from changes in gravity that space emerges from gravity time delay. Thus, space and motion are both within the domain of changes in inertial matter and time delays and not the other way around as shown in the figure below. The total time delay for light due to gravity is after all a factor of two greater that of just light’s gravity MEE time delay. 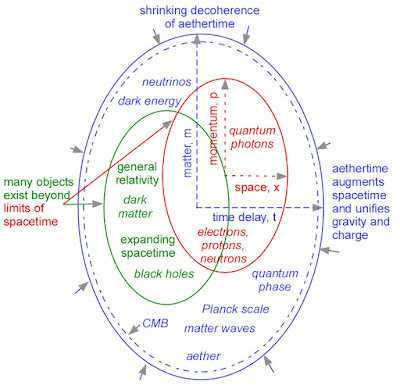 Any model of the universe with both gravity MEE and time delay will also be consistent with the observed gravity light deflections, but there are further notions of relativity that do not necessarily follow from gravity MEE and time delay. For example, GR lacks an absolute frame of reference even though the CMB seems to be an absolute frame of reference and given an absolute CMB frame simply limits the scale for GR tensor algebra.

Also, the determinate geodesic paths of GR objects in a 4D spacetime are inconsistent with the microscopic probabilistic quantum paths of the very successful quantum action. In fact, the determinate GR geodesics in effect do away with the quantum notion of time since time becomes just a GR displacement and it is the 4D geodesic paths that then determine the futures of all objects from the initial conditions of the universe.

In contrast, quantum mechanics shows by many different measurements that there are no determinate geodesic paths for quantum objects. In fact, there is a fundamental lack of knowledge of certain quantum paths and a fundamental uncertainty principle limits all quantum paths. Yet despite the limitations of GR, the predictions of MEE and gravity time delay corrections allow our GPS satellites to work and explain the deflection of starlight and the time delays of quasar radio sources by the gravity of the sun as well as the lensing of galaxies by other galaxies. All of these measurements are consistent with gravity MEE and time delays and so any theory that incorporates MEE and gravity time delays will also be consistent with all of these observations as well.

The further notions of a lack of an absolute frame of reference in GR and GR determinate geodesics are then both open to question and neither has been verified by measurement.  The CMB does seem to represent an absolute frame of reference that then closes all motion in the universe and the well demonstrated quantum uncertainty does seem to rule out any determinate GR geodesics. Thus there are still notable limitations embedded within general relativity despite GR’s notable successes with gravity MEE and time delays. Furthermore, as science better understands the universe, the limitations of GR become even more apparent.

Black hole singularities are inconsistent with quantum action
Probably the most famous of all of general relativity’s limitations is the notion of a black hole singularity. Given enough mass, light’s gravity time delay will eventually be sufficient to capture light into a singularity and therefore stop atomic time at an event horizon, two well worn predictions that simply cannot be the whole story.

Black hole event horizons are inconsistent with quantum action
A particle of matter that encounters the event horizon of a black hole is subject to two quite different predictions; gravity and quantum. According to much of the historical black hole modeling, such a particle simply becomes part of the mass accretion and loses all information about its past.

More recent calculations find that, prior to reaching the event horizon, a particle is ripped into successively smaller pieces until the very, very small Planck limit. Those tiny pieces of matter begin collapsing before they accrete and therefore never actually become part of the primary black hole. These eternally collapsing objects, eco’s, take the place of the primary black hole, but do not really resolve the quantum paradox.

Quantum calculations predict something for a particle of matter at an event horizon, tearing into matter and antimatter particles, resulting in so-called Hawking radiation. The black hole event horizon turns into a quantum firewall and just like with the eco, accretion action stops near the event horizon. There just cannot be these two very different fates for the same neutral particles.

Proper time is inconsistent with quantum time
Proper time is a key notion of GR and that proper time then becomes the fourth displacement of 4D spacetime. Ironically, time as a GR spatial displacement in effect does away with the uncertainty of time. Because all motion in GR occurs as a result of gravity along determinate geodesic paths, the future is completely determined by the past.

Quantum time, on the other hand, is both reversible and uncertain and there is no stopping quantum time at a GR event horizon or anywhere else in the universe. However, time is simply a quantum progress variable and there is therefore no quantum expectation value for a time duration or delay.

Lack of amplitude, phase coherence, interference, and entanglement
Our quantum reality depends on both the phase as well as the amplitude of matter. However, gravity force in GR only deals with the norms of quadrupole matter and time and so there is no role for phase coherence or interference or entanglement with gravity. Since all of these notions of amplitude and phase figure prominently in quantum action, it is a major flaw in GR that there is no corresponding quantum monopole or quadrupole gravity to complete our quantum reality of dipole charge.

Planck limit inconsistent with quantum uncertainty principle
Once a particle gets small enough, its own gravity will collapse it into a microscopic event horizon where time stops and quantum action does not apply. But quantum action functions everywhere in the universe, even inside of black holes and there is no stopping quantum time. Quantum action limits the divisibility of matter and space to the uncertainty principle and to the quark, but there is still something wrong with quantum time.

It would seem to be much more likely that the CMB represents an absolute frame of reference that all can seen and that necessarily closes the universe. We would not then be in an expanding universe at all and the CMB will still be a CMB in one billion years, albeit somewhat evolved.

Quantum time is not consistent with proper time of GR
A determinate time in GR is incompatible with the uncertainty of quantum time. Quantum atomic clocks tick very precisely but their precision is limited by the uncertainty principle. Moreover gravity clocks that tick like millisecond pulsars are also very precise and yet ms pulsar gravity clocks all decay. While that decay can be largely due to gravity and/or EM radiation, there is an average intrinsic decay as well of 0.255 ppb/yr. That intrinsic decay means that ms pulsars tell two distinct times as their pulse periods and as their average decay.

Many very smart people have worked very hard for nearly a century to make space and motion consistent between gravity and quantum, but to no avail. In fact, the notions of infinite divisibility for both space and motion have actually been problematic since the time of Zeno of Elea, the Greek philosopher of 460 BCE.

The continuum of sensation of objects that fills time contrasts with the void of sensation that we presume exists as space
Unlike the void of empty space, for which we have no sensation, time is filled with a continuum of waves of sensations. There are no empty voids of time since all of light, sound, touch, smell, and taste shine continuously onto us and our senses with a continuum of sensory information about objects and their backgrounds. Our sensation of object changes and time delays result in neural packets of aware matter from which consciousness extracts information useful for prediction of action.

Objects that we sense have a different time delay from the backgrounds that we sense along with those objects. Our minds use space and motion to represent the difference in time delays as an absolute time or Cartesian distance that separates objects from other objects and their backgrounds. Space and motion, in this sense, simply emerge as whatever they need to be in order to properly represent the object changes and time delays of sensation, but space and motion do not exist in the same way that matter and time exist.

Therefore, the lonely nothing of empty space and motion within that space are notions that emerge from a more primitive reality of object changes and time delays. The nothing that we imagine as space and the motion of objects in that nothing of space are both simply very useful representations of consciousness. Notions of space and motion help consciousness keep track of objects and make predictions about the futures of those objects.
Posted by steve agnew at 8:53 AM No comments: