Quantum phase coherence between an observer and a source is a critical concept that differentiates quantum charge from classical gravity. Quantum phase coherence makes no classical sense in general relativity and so quantum gravity cannot ever exist within the classical confines of GR. There are three different action equations possible for reality, but the choice really just reduces to either quantum charge or classical gravity. 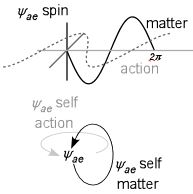 [1]
which says that an observer is always related to its own outcome by some kind of interaction with a itself. Seems pretty simple, but the funny i factor means that the future is never absolutely certain since an observer can act on itself.

and says that an source follows a determinate path, S, unless acted on by another source by the action dm/dt that changes the source orbital period, tp. Even though gravity exists in the same quantum root reality as charge, the gravity of a GR observer does not act on itself. This means that the geodesics of general relativity are not subject to the uncertainty of quantum futures.

In a quantum reality, even gravity matter has phase coherence and shows interference effects and uncertainty since it is light that is the quantum glue that holds both charge and gravity matter together. The symmetry of the gravity biphoton simply means that quantum phase coherence exists for gravity as well as charge. However, the exchange of two gravity biphotons always results in complementary phases and so the resonances between gravity bodies always exchange complementary phase.

The matter-scaled Schrödinger equation Eq. 1 with mR as the Rydberg mass equivalent energy of the hydrogen atom bond provides the matter wave psiae. The strange  i = eπ/2 Euler phase factor simply represents a phase shift of pi/2 or 90° between a matter wave and its time derivative, which is the observer and a source. It is just this phase coherence that is what makes the quantum matter waves of Eq. 3 much different from classical matter waves of Eq. 2.

Biphoton exchange applies the same quantum glue of coherent photon phase to gravity.  Bonding an electron and proton is due to the exchange of a photon particle of the Rydberg mass, mR, which is the hydrogen bond. That binding photon today has a complementary and entangled photon emitted at the CMB that together form a biphoton quadrupole. Instead of a single photon, gravity is this irreducible coupling of bond and emitted photons as a biphoton quadrupole. Biphotons are the phase coherent quantum glue that bonds neutral particles to the universe with the quadrupole biphoton force scaled from a photon as tB / Tu x e.

The Schrödinger equation shows that a differential change in an object is orthogonal to itself for both charge and gravity. A differential change in a gravity wave biphoton will also be proportional to itself, but since the biphoton has dipoles with entangled phase, the resulting product wavefunction now commutes and satisfies both quantum Eq. 1 and classical Eqn. 2.

The classical action integral of general relativity, S, has a matter-scaled time derivative related to the Lagrangian that is simply equal to the kinetic minus the Hamiltonian interaction energy. Typical objects have very large numbers of such quantum gravity states along with many fewer quantum charge states. Quantum gravity states tend to be incoherent sums of matter wave norms that represent classical gravity and relativity. Unlike the relatively high energy of atomic bonds, quantum gravity bonds are very much weaker and so involve very much lower frequency biphotons. Any phase coherence of a quantum gravity is typically dominated by the phase coherence of quantum charge and so gravity mass exists largely as matter wave norms without coherent phase.