Peterson and Harris have two very different beliefs; Harris believes in an subjective atheistic Zen Buddhism archetype while Peterson believes in a romantic and pragmatic Christian archetype. An archetype as per Carl Jung is an idealized person or myth whose behavior people then choose to emulate to improve their own lives as well as the lives of those who they touch. The Buddhist and Christ archetypes therefore both have very large followings around the world and have many similarities as well as many differences. Both the Buddha and Christ narratives teach that life is full of misery and suffering and both narratives seek to therefore reduce that misery and suffering and so improve life. Each archetype then has a series of rituals that further help people to lead more compassionate and less selfish lives.
They have posted two very interesting videos, one and two, along with each of their own followups, three and four, that are all well worth viewing. The notion of discrete aether wisdom is as shown in the diagram and is a way to understand what Peterson and Harris are saying. That is, that wisdom derives from both classical knowledge like the facts of science, as well as from quantum intuition, which comes from reason and intuition. It is quantum intuition that allows people to know the substantial amount of wisdom that comes from outside the facts of science. This includes great literature, philosophy, and religion, which are all parts of the universe that define the quantum unknowable. 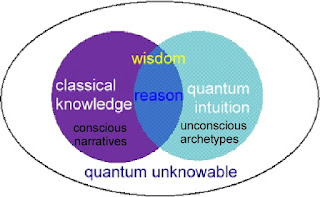 While the essence of Peterson's Christ archetype brings objective order from subjective chaos, Harris's Buddhist archetype also brings order from chaos with only a belief in the archetype of the tools of science. Harris admits that there is much that science does not know about the world and even that science typically refuses to even consider any questions that have no measurable and objective facts. This is in spite of the fact that Harris does follow to a Zen Buddhist archetype, but seems to say that Harris has extracted the useful wisdom of the Buddhist archetype with the rational maeasurements of science. Harris has stated in many previous discourses, though, that there are still very deep mysteries with consciousness. Harris is nevertheless confident that the tools of science will eventually be able to extract a useful wisdom from measurements of consciousness.

The Harris atheist myth, on the one hand, patterns life based on a subjective feeling of what is right, which is an archetype of self image and therefore atheism is inherently selfish. The atheist archetype rejects any role for mysticism or spirituality in life but it really takes a very devoted belief in the atheist archetype given that it is beliefs in archetypes that anchor consciousness, not just a belief in the facts of science. While Buddha teaches salvation through meditation and loss of self, Christ teaches salvation through prayer and compassion for others. Harris denies that there could be any such thing as an atheist archetype or belief since atheism is the belief that religions are false and destructive narratives. Since archetype belief is what anchors all consciousness, everyone has a set of belief archetypes and so Harris goes on to say that atheism is closest to his archetype belief in meditation as a means of addressing the mystery of self and consciousness.

The figure below shows the dipole cosmic wave background and the CMB archetype shows the absolute direction from our birth to where we are all heading in the universe. We are coming from to constellation Pisces and heading towards the constellation Virgo in the sky, which means we were created at our own CMB in free space and are collapsing into the Virgo galaxy cluster and then supercluster final destiny. This diagram is reminiscent of the Yin-Yang archetype of Daosim, which supposes people on the border between chaos of many possible futures versus the order of the past... 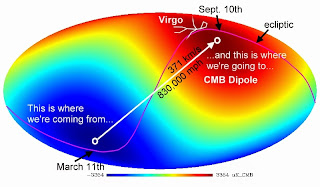 When two people share their archetypes in discourse of narratives, there is an opportunity for them and others to learn more about the archetypes from those narratives. However, it is also possible for any such discourse about beliefs to get bogged down in some semantic differences in language and definition of terms. In fact, Harris and Peterson did get bogged down with their respective descriptions of values and truths and that resulted in just such a dead-end that ended their first session. However, their next session managed to table the issue of values and truths and move on to other more revealing discourses on the value of great literature and other ancient wisdom.

While Harris is an avowed atheist apologist who does not like the word atheism to describe his belief that there is really no useful role for the false narratives of religion even though Harris is a devoted meditative Buddhist. Peterson is an avowed Christian apologist and is dedicated to a pragmatic salvation by resurrection and emulation of various religious narratives which are not true and also not false. So naturally their discussion included the role of science and measurement and both agreed that the measurements of science are useful tools. Peterson called Harris a Newtonian as opposed to calling himself a Darwinian romanticist or pragmatist. Harris prefers to call himself a skeptical materialist in that he doubts anything that science cannot measure and yet is certain that the world exists outside of his mind. He further believes that the false narratives of religion have little value for his outcomes and further argues that religion has therefore little value for civilization as well.

Peterson has a great deal of derision for the moral relativism that he calls post-modern neomarxism. Peterson's derision is therefore interesting since Harris is really the embodiment of a post-modern relativist. Harris even believes that the facts of science can define moral behavior better than religion, which is a belief called scientism. Since the subjective truths of moral behavior are based on belief and not on the facts of science, this simply is not true. Harris is not quite sure why Peterson calls him Newtonian versus Darwinist since Harris most certainly views Darwinism as part of science. Peterson criticized Harris along with Dawkins in previous discourses for calling themselves scientific Darwinists and yet completely ignoring the role of hidden knowledge in the evolution of morality. After all, much of Darwin’s evolution takes place with a blind determinism but is really subject not only determinism, but also to the free choice of behavior. Instead of just determinate blind fate driving evolution, then, quantum free choice also drives human evolution including moral feeling.

While Peterson recognizes science and measurement as great tools for collecting facts, Peterson also argues that there are limits to any wisdom from the facts of science. One example that he poses is that there is wisdom and therefore great truths in the literature of Tolstoy and Dostoevsky and that wisdom and truth have little to do with the fact-based wisdom of science. In fact Harris gave Peterson this point and Harris also then accepted that there is much useful wisdom in the ancient stories of religion. But Harris then went on to say that he saw little future value for religious wisdom since religious stories are not based on the facts of science.

Harris then described how he invented a mystical story from a randomly acquired recipe. Such an invention Harris claimed was an example of how human ingenuity generates mystical stories without any basis in the facts of science. Peterson countered that just because Harris invented a mystical story does not then mean that it is a very good story and just like there is much literature that is not very good, there is also many religious stories that are not very good either. The value in any particular set of myths is in how well it resonates with people over the ages and if it is therefore creates archetypes that are useful in guiding behavior. Peterson is a pragmatic romanticist since he believes that the archetypes of ancient stories are often good to emulate for improving your life.

Why are we here?

Why are we right here right now?

Why is it us and not someone else who is right here right now?

Atheist apologists like Harris believe the fundamental archetype that all true wisdom derives from only the facts of science. Atheism further argues that although there has been much useful ancient wisdom from historical religions, the tools of science have already extracted all of that useful wisdom from ancient religions and therefore people have no future need for religion. Furthermore, there are malevolent and therefore undesirable aspects of religious archetypes and so it is better to abandon religious archetypes.

The atheist argument is that science can measure the well-being of a moral life and differentiate a moral from an immoral life...but science cannot judge a moral life. Religions therefore believe that they still have an important future roles in judging morality along with future study of other great literature as well. After all, without moral archetypes to anchor consciousness, there is no reason or meaning for a moral versus an immoral existence. And without the continuing evolution of the ancient wisdom of morality, there are no archetypes for consciousness.

Therefore it is very important for civilization to have some conservatism and only change acceptable behavior slowly enough to avoid falling into the bottomless pit of an absolute moral relativism along with the victimization of all inequality. Civilization has experienced many past episodes of violence and war that clearly resulted from upheaval and change and in particular, a dramatic change in beliefs. It is very desirable for civilization to therefore anchor human consciousness in a variety of different adaptive methods in case one of those belief archetypes changes. Different archetypes for consciousness do need to share a fundamental belief system that limits permissible behaviors and yet still gives people’s lives purpose and meaning.
Posted by steve agnew at 9:07 PM No comments: