Free Will and Agency

People who say that they do not believe in free choice still believe that their decisions matter and as a result, they freely choose to believe in their own lack of free choice. However, without a belief that their choices make a difference there would be no meaning and purpose and choice in their lives would be subject to the all-consuming despair of nihilist chaos.

In our relational reality, people with free choice bond with some people and not with other people and those neural bonds and conflicts result from often very powerful emotions and feelings. Since people freely to choose to bond with some people and not with others, this is free choice and the reasons and feelings do not always have knowable precursors. People also freely choose to persuade others that there is no free choice despite there are no measurement for free choice. The determinate argument is that who you freely choose to bond with or who you freely choose to persuade is due to determinate precursors, the present, any possible outcomes, and the noise of classical chaos. Since classical chaos is ostensibly random, that means that no future is certain, but the determinate argument is that even that does not mean we have free choice.

It is very likely that the bonding of neural action involves entanglement and superposition in ways that science does not yet understand.  For example, since every macroscopic action has some quantum phase noise, repetitive macroscopic actions like flips of a coin toss or neural impulse of a brain tend to result in mixing classical and quantum phase noise. Quantum phase is, after all, very important for the charge bonds of matter and so it is very likely that quantum phase is also important for neural bonds and even gravity bonds.

Quantum phase is at the root of both consciousness and free will archetypes. Our relational reality involves charge bonds, neural bonds, and gravity bonds as shown below. 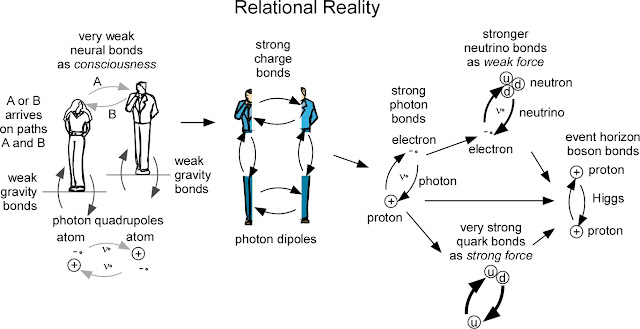 Atoms do not have free choice, but that does not mean that a mind, which is made up of a large number of atoms, also does not have free choice. Just like a coin will have very well defined heads and tails, flipping a coin results in a 50% probability and uncertainty of landing heads or tails. Neural action potentials are then like flipping a coin and are necessary for free choice just as they are necessary for free will as well. Although science cannot measure free choice or free will, people are conscious and therefore do have free choice as well. Science stating that there is no free choice suggests that science can measure and know all of the precursors of free choices that we all make to an unlimited precision. However, it is simply not possible to know all of the precursors to free choice with unlimited precision since quantum phase noise limits the precision of any knowledge.

Free choice is the result of a large number of neural action potentials and each neural action potential is subject to a discrete quantum uncertainty just as all action in the universe is subject to discrete quantum uncertainty. Therefore, while the universe is largely determinate in that every outcome has a knowable precursor to some precision, there are discrete outcomes that have unknowable discrete precursors even though those discrete precursors do exist. For example, entanglement and superposition can couple discrete outcomes in discrete precursors that are not possible to know with unlimited resolution. While the determinate chaos of noise certainly make discrete neural outcomes uncertain, the entanglement and superposition of quantum phase noise also makes neural outcomes uncertain even though outcomes do entangle and correlate with other outcomes.

Unlike the determinate noise of classical chaos with unlimited resolution, the uncertain noise of quantum phase is also subject to entanglement and superposition and therefore has a well-defined limited resolution. Entanglement and superposition make the precursors of quantum phase noise as discrete outcomes that are inherently unknowable and at limited resolution. The limited resolution of discrete quantum phase is what make up free choice and free will as opposed to the unlimited resolution of determinism. Once again, the outcomes of free choice and free will follow from the lack of any measurable and therefore knowable discrete precursors even discrete precursors exist for every discrete outcome. Although we can rationalize many of the choices that we make, there are many choices that we make for which we can never know the reasons. This is because we make many decisions based on our feelings and feelings derive from emotions and unconscious archetypes and therefore feelings do not always have knowable causes even though there are causes for all feelings.

Science argues that quantum phase coherence has no role in choice or free will and therefore no role in neural action potentials either. However quantum phase coherence along with entanglement is part of all matter and can and does affect many things that we feel we understand very well since we do not often consider the role of discrete quantum phase in macroscopic action. After all, most people's lives lie outside of science and include art, music, literature, religion, law, government, commerce, crafts, and so on.

People have the freedom to choose many different outcomes for their lives, but science often feels the need to persuade people with the subjective opinion that people do not really have any free choice. Science claims that free will is an illusion, but this is a subjective opinion often masquerading as an objective measurable fact. For example, a recent blog post states:

1) You never had free will.
2) Your story has not yet been told.
3) Input matters.
4) Understand yourself.

Everyone who has lived is part of the collective memory of civilization. History tells more stories about famous people than those who are not famous, but family relationships tell many more stories than any popular history ever could. While input certainly matters, it is by a lifetime of experience and memories that we make decisions, not just by immediate input. Moreover, the superposition of a large number of precursors as well as possible outcomes all affect free will. Understanding yourself is tantamount to understanding consciousness. Since there are no objective measures for consciousness, subjective claims about understanding consciousness and free will have no objective meaning.

In both cases, murderous regimes used an ideology of social responsibility to justify the killing of many millions of people to benefit a much larger number of people. In fact, the murder of so many people increased suffering and misery much more than pleasure and joy. In contrast, it is the primacy of the individual and the social responsibility of the free market that, despite its flaws, seems to have unleashed a great wealth of human productivity for civilization.

Posted by steve agnew at 8:37 PM No comments: