Do We Matter in the Cosmos...

There are certain transcendental beliefs that are a part of existence: being, identity, beauty, truth, and feeling. A recent Aeon essay Do we matter in the cosmos  by Nick Hughes opens with several sweeping statements of how insignificant is the matter and action of civilization and earth relative to the total matter and action of the universe. Hughes never mentions the role of transcendent belief and in particular, that he first of all has being, an identity, knows beauty, acknowledges truth, and certainly has feelings as well. With these transcendental and therefore cosmic beliefs not measurable by Science, Hughes concludes that he is insignificant. After all, Science tells us that civilization is only ~10,000 years within a universe of billions of years it would seem all of civilization is therefore insignificant. It would take 100,000 years to cross our galaxy traveling at the speed of light and so with the limitations of matter and energy, people cannot visit other stars in the galaxy in the same way that people visit other places on earth.

The essay does not mention the transcendentals at all and mentions causality briefly. Hughes does not evidently believe in the uncertainty of quantum futures and the fact that our matter is quantum entangled with all of the matter in the universe. Quantum phase noise plays a particular role in our differentiation of a classical determinate reality from the many possible futures of the actual quantum reality in which we actually live.

In the end, though, Hughes essay does conclude that even though civilization is not very massive compared to the universe, the neural resonances and Grand Narratives of civilization are most of what matters to us here on earth. So even though the size of the universe boggles the mind... so what? Likewise, the microscopic size of matter also boggles the mind... so what?

"And whether or not they are objectively valuable, the ends that matter to us, the things that we care about most – our relationships, our projects and goals, our shared experiences, social justice, the pursuit of knowledge, the creation and appreciation of art, music and literature, and the future and fate of ours and other species – do not depend to any considerable extent on our having control over a vast but largely irrelevant Universe...Most of what matters to us is right here on Earth."

The essay argues that the time and space of the universe makes people and civilization seem insignificant in comparison since we cannot personally visit most of the universe. Hughes does not mention that the size of the atom is a microscopic world that we also cannot personally visit either. We also cannot visit the tens of thousands of miles of the vast matter of inner earth nor can we visit Venus' surface or the surface or interior of the sun. So there are a lot of places that people cannot visit and yet there is no mention of our insignificance as a result of not being able to visit the sun or the center of the earth.

People tell stories and share experiences about their discoveries and these narratives limits the possible futures that people discover. Travel across the universe requires the matter equivalent energy of the universe and a journey to the our galaxy center and back would not take 58,000 years for those travelers at the speed of light. A the speed of light, a traveler would only experience a moment of time in such a journey. Even at less than light speed, a space ship accelerating at 1 g and then using the supermassive black hole to slingshot a return to earth would only take about 25 years. Of course, during that journey earth would still age 58,000 years according to relativity and the spaceship would therefore return to a very different earth. 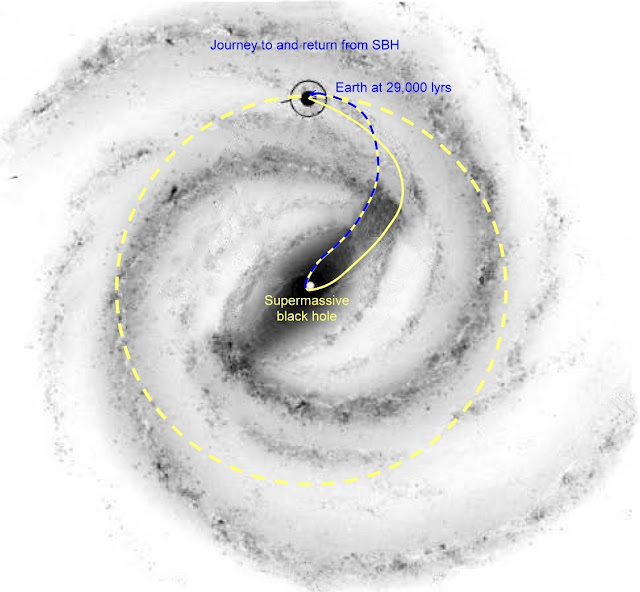 Also, the matter equivalent energy needed to maintain 1 g acceleration for 15 years is beyond science today but there might be ways to use galaxy spiral gravity waves to boost future journeys at this scale, so called gravitization waves. Gravity waves, after all, are something that science is just learning about and so maybe we can catch a gravity wave and surf our way to the galaxy center. It would take the matter equivalent of ~600 MW nuclear reactor to accelerate a 100 MT ship at 1 g for a year. After all, spacecrafts already use the gravity assist of earth and other bodies to accelerate and so future spacecraft may surf gravity waves for space travel.

We do matter in the cosmos since it is us who determines what matters to us and not anybody outside of our own local universe. The definition of a universe is the matter and action that we affect and that in turn affects us during our lives. The universe that we imagine does not exist until we experience that universe and so we are in fact the most important part of our own universe since neither it nor its uncertain future would exist without us observing it.
Posted by steve agnew at 10:19 AM No comments: