The two bubbles of spacetime quantum and general relativity with their conjugates of momentum and position exist within the aethertime universe as shown in the figure below. Aethertime unifies charge and gravity as time-scaled versions of the same aether decay and so a shrinking aethertime universe is what unifies quantum charge and general relativity's gravity forces. Unification has eluded many very smart people for nearly a century, but aethertime unifies charge and gravity forces with the same time scaling that also unifies an antimatter antiverse with our matter universe into a the growth and decay of a single aether pulse in time. As a result, aether decay shows that it is the disparate notions of spacetime itself that precludes unification with a pernicious elusiveness that even very smart people simply have not yet been able to figure out. That does not mean that I am smarter than everyone else, just luckier...and grateful for the many very precise measurements of objects and time that show aether decay. 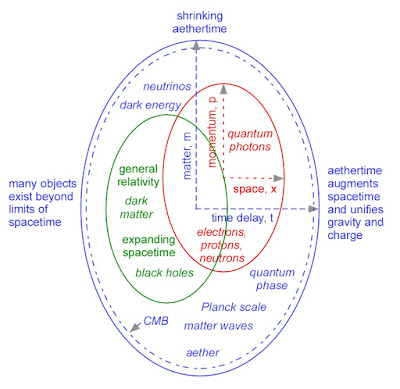 Einstein's general relativity (GR) describes motion with a continuous gravity force that moves objects along determinate paths called geodesics in the void of empty and continuous space and time. The green ellipse in the figure shows the predictions of GR. In contrast, quantum theory as the red ellipse moves objects with discrete expectation values of momentum and position with charge force mediated by photon exchange. Quantum excitations result in motion along uncertain paths in that same space, which is now full of vacuum oscillators, that space where gravity motion involves determinate paths.

In GR, space, motion, and time all become undefined at the event horizons of large matter accretions known as black holes and just beyond the CMB as well as at very small scale, the Planck scale. Spacetime has recognized these limitations for many years, but spacetime still does not show any other way to predict the futures of objects without continuous space, motion, and time. The very definition of space is odd since space is a void of nothing that we cannot sense in a continuum of time and space. Spacetime only assumes that space exists because all of the objects moving around need space as a way to be different from each other and so it is our sensations of objects that inform us about space.

The evidence that spacetime has for the nothing of empty space depends, then, on objects not changing and being constant. Objects may move from one place to another in spacetime and emit or absorb energy and mass, but total object mass and energy must always conserved in any action in empty space. Of course, if an object loses mass by emission, the motion of that mass involves kinetic energy, which increases the mass relative to the rest frame and so the accounting of constant relativistic mass must be done very carefully.

Both charge and gravity forces act through space, but while photons mediate charge force, gravity force simply cannot have a carrier particle since gravity is by its very nature continuous in a continuous space and time. Since there is only one time dimension in GR, atomic time, the continuum of gravity force means that space and time become undefined in the universe at both very small and very large mass accretions, including at beyond the CMB, which is now at 0.9991c. Once the CMB transitions to 1.0c, it will move beyond the event horizon of spacetime, which seems like a really unlikely universe.

Aethertime is an alternative way to keep track of objects with discrete aether and time delay and as a bonus, aether decay becomes the genesis of all force. Discrete aether, matter exchange, and time delay represent a more general aethertime reality that augments and wraps around spacetime's more limited continuous space, motion, and time and so aethertime does not suffer from the same limitations of spacetime. Aethertime predicts motion with discrete aether exchanges in a fully quantum action and discrete time delays for even very large and very small objects, and now aethertime augments the limitations of the continuous motion of continuous space and time with a complete universe.

Instead of predicting motion with fields of force in the vacuum of space, aethertime predicts motion with matter exchange and aether decay. The decay of discrete aether is now an inherent property of aethertime from which emerge the fields of force that are inherent properties of continuous space, motion, and time. Unlike the nothing of empty space which we never by definition measure or sense, there is plenty of evidence for discrete aether decay in the many measurements of object mass decays that show the same very slow decay over time, 0.26 ppb/yr. These measurements include the IPK primary mass standard, the earth spin, the earth-moon orbital period, milky-way to Andromeda time delay, and the average decay of several thousand neutron stars as millisecond pulsars.

While objects in spacetime appear to have constant mass over atomic time, all objects in aethertime decay along with the rest of the universe over the very long time scales of aethertime. And of course, the natures of both charge and gravity forces derive from the same decay of aether, which appears to act through space. However, aether does not exist in space and so space has zero density, but aether decay does result in a pressure for space. A pressure for space with zero density is equivalent to an incompressible aether.

The period of atomic time also decays over aether time as do c, h, and α, which really changes how we interpret the distant objects of deep space including the decays of millisecond pulsar neutron stars and the red shifts of distant galaxies. The decay of discrete aether mediates both charge and gravity forces in aether time, which for charge is by exchange of the dipolar photon while for gravity is by the exchange of mono/quadrupole photon pairs scaled by the time size of the universe. Therefore, charge and gravity forces are both mediated by the same aether exchange and decay with the scaling of the universe time size. In addition to atomic time, there is a second time dimension, aether time, and discrete aether and time now predict action for all of universe, including both very small and very large mass accretions.

Unlike the lonely void of empty space, objects are never alone in a universe of discrete aether. We exist as part of the discrete aether whose exchange connects us with all other objects. Discrete ether has both mass and spin and is the basic building block and aether decay is the binding force of the entire universe, not just for observable particles. Our notion of two particles in relative motion in continuous space emerges from the discrete aether exchange between those particles and their time delays. While neither atomic time nor continuous space have meaning at the event horizon of a black hole, aether time represents an event horizon as simply a transition from fermion matter and atomic time to discrete boson matter and time delay.
Posted by steve agnew at 9:03 AM No comments: