The Problem With Quantum Theory

Institute of art and ideas interviewed Tim Maudlin about his problem with quantum theory.

Very nice interview shows the philosophical approach of Maudlin as opposed to the technical approach of physical science. While Maudlin argues that philosophy is very confused about the nature of physical reality even after 100 years of the very successful technical predictions of quantum science, science simply accepts quantum because it works really well. Science accepts quantum because it works while philosophy asks what quantum means and gets confused by both the question and the answer. Philosophy is, after all, really a discipline that asks questions without objective and testable answers, then answers them all the while arguing endlessly with other philosophers about the answers and about the nature of physical reality.

Maudlin argues that the axioms of infinitely divisible and determinate time and space are fundamentally incompatible with the discrete uncertainty of quantum knowledge. While this is true, Maudlin does not consider it possible to have a universe without first of all time and space, but that is exactly the quantum matter action universe of discrete aether that we have.

These are all questions that have no answers, but are nevertheless useful questions to ask and discuss because that is what consciousness does. After all, it is not always clear which questions we might find out how to answer with new knowledge. "What is consciousness?" is just such a question that does not have an answer but might have an answer with better knowledge. Consciousness is therefore always asking questions without answers and then continuing to find meaning either in discovering the answers or in the endless discourse that follows uncertainty. This is basically because we cannot always know the limits of what we can know even though we know there are limits to what we can know. We do need to keep asking and answering unanswerable questions in order to find the horizon of answers where we just lack knowledge.

The inherent uncertainty of quantum phase means that there are outcomes that have precursors that will always be unknowable. Since we ourselves have quantum phase, we can only know matter phase of an action relative to our own matter phase. This fundamental quantum uncertainty limit shows that the world is not deterministic and that every free choice that we make affects the outcomes of the entire universe. Besides quantum uncertainty, there is also uncertainty from the chaos of determinate actions. Given a very large number of determinate actions, chaos means that it is not possible to predict motion better than some uncertainty of matter action.

The Hasse diagram shows precursors and outcomes of the universe at low resolution starting with the CMB creation precursor to hydrogen, stars, and then galaxies. Higher resolution Hasse diagrams will show more and more detail until the resolution limitations of classical chaos called noise. However, the infinite divisibility of space and time in a determinate universe means that there is no limit to the precision of determinate knowledge. 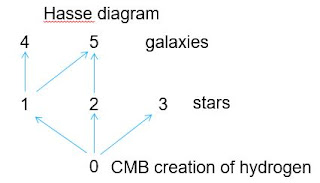 Posted by steve agnew at 9:27 PM No comments: