Quantum matter action results in a causal set universe where space and time emerge from a sprinkle of random quantum photon resonant paths. The quantum gravity of matter action is Lorentz invariant and therefore completely consistent with the measurements of Science. However, matter-action interpretations of those measurements are quite different from spacetime interpretations.

Gravity relativity is a body centered force in spacetime that curves or warps spacetime around that body. Thus, bodies follow the straight-line geodesics in warped spacetime and so there is no spacetime gravity force, just gravity warping of spacetime.

The quantum black hole is really not black at all and, just like any quantum body, not only absorbs light as heat, but also reflects and transmits light to emitters as well as other black holes. The Ricci tensor of relativity shows the effect of matter on spacetime, but the random red shifts of photon geodesic resonances sprinkled into spacetime correspondingly reveal the presence of matter. Photon resonance geodesics are simply causal links between bodies that are the underlying structure of matter action from which space and time emerge as gravity relativity.

The quantum causal set of a black hole incorporates the same causal set emitter pair geodesics as does all of reality. Of course, the emitter superposition only decays with quantum black hole absorption and it is only then that there is an arrow of time.

Posted by steve agnew at 8:48 AM No comments: 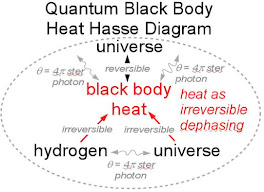 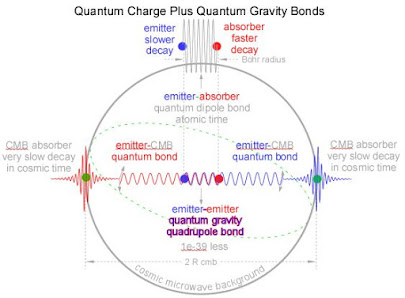 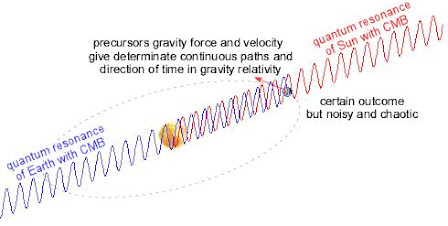 Planck in 1901 first proposed the notion of a quantum of light to limit the energy of light of an atom but it was Einstein in 1905 who made the connection between the Planck quantum and photons of light. Einstein connected Planck's quanta of light from measurements of the photoelectric effect, where illumination of a vacuum diode resulted in the detection of single electrons emitted by single photons when the light frequency exceeded a certain threshold. It was somewhat later in 1926 that G.N. Lewis coined the name photon.

The propagation of a photon wavepacket from an emitter through space to an absorber along with its spectrum defines the nature of each photon. Although each photon has a characteristic energy and mass from its frequency as E = hn, m = hn/c2, the quantum phase of the photon spectrum also reflects the nature of each matter action emitter and absorber as well as their lifetimes. The emitter-absorber resonance gives a photon its matter and phase spectrum and a matter-action of that excited resonance can spontaneously decay into heat at either the absorber or emitter. However, by definition, the absorber decays to heat faster than the emitter and this is what gives the arrow of time. 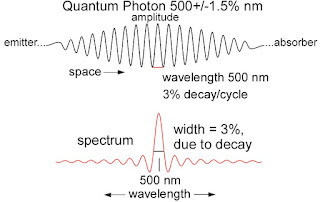 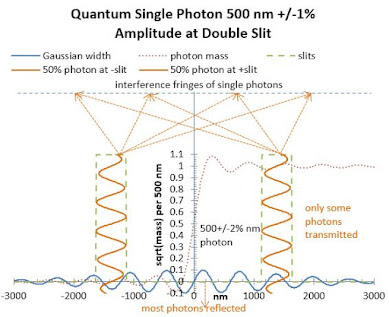 There are a number of different ways to do the single photon counting two slit experiment. Hamamatsu did the one below in 1982 with 0.254 micron light from mercury atom plasma lamp and a 100 micron slit collimation followed by two 50 micron slits at 250 microns separation. This is a typical setup for the two slit experiment where the slits are 200 times the wavelength and the separation 2,000 times the wavelength and results in 6 fringes on the screen. Since each photon enters the two slits with different phases, the photon exits the two slits at different phase angles and therefore directions depending on the emitter and absorber phase matching, which is essentially random. 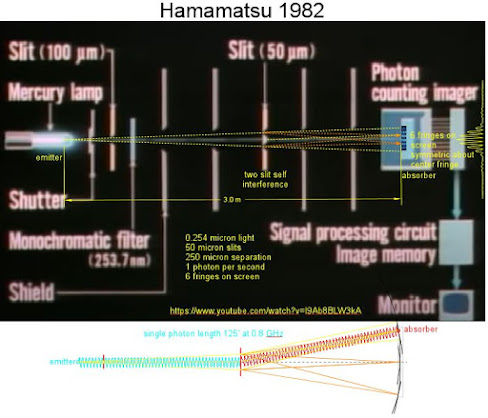 The single photon two slit experiment shows the interference of each photon with itself to result in a well-defined but random path for each single photon. Since this photon coherence length is 125' per 1/e and so each photon results in a very clear resonant phase between the emitter and absorber. The relative phase matching between the emitter and absorber is basically random and sets the particular photon path.
The figure below shows the two-slit causal set and its spectrum of sprinkled random red vertex resonant photons that, after some time of photon accumulation, converge to the analytic diffraction function also shown. The red vertex resonant photons irreversibly decay into heat at the absorber. The black vertex nonresonant reversible photons decay as heat at the emitter.

There is no space or time in the two slit quantum causal set, just the mass of 254 nm mercury photon, Planck's action constant, and the quantum phase angle, q. All of the resonant single photon causal vertices are reversible and so split the single photon events 50:50 between the emitter and absorber decays. Each photon has a vertex that includes both slits, which alters the phase of the photon, but not its frequency, energy, or mass.
The sprinkling of many random single photon events defines the diffraction pattern spectrum as the figure shows with just 1000 photons that decay into heat at the absorber. Many more photons decay as heat at the emitter, including nonresonant photon vertices. Space and time both emerge from this random sprinkling since the diffraction splitting defines the slit separation relative to the photon wavelength. Of course, time emerges from the photon oscillation and the speed of light, c, and so this sprinkling of random but resonant vertices is what defines the space and time of our physical reality.
two slit experiment
How not to do the two slit causal set...

down a 10 layer hypergraph to create 75 events for the causal graph below. 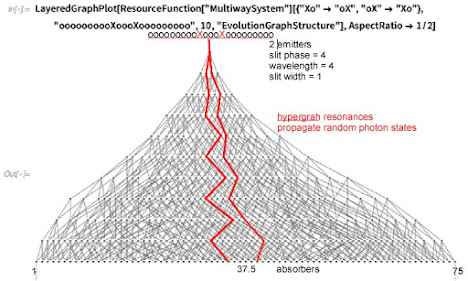 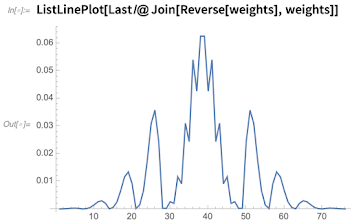 However, this is just a classical wave diffraction pattern with a splitting of 16 units and results from two coherent sources or slits spaced 4 units apart with a light wavelength of 4 units and a slit width of 1 unit.

Since this hypergraph is determinate and not probabilistic, it simply represents a classical wave diffraction pattern of two point sources. In other words, this is not a quantum two slit multiway hypergraph since it does not represent any emitter-absorber quantum phase resonances at all.

Therefore, the results of these multiway hypergraph layers are simply spatial smoothing functions for the classical two emitter diffraction and has no collimator. Random excitations of graph resonances can occur when the emitters and absorbers are in phase and those result in a photon states that then decay irreversibly. The states release heat to either the absorber or emitter depending on relative decay times to transit times. When a photon decay occurs in the absorber, we call that a photon event and all of the other emitter photons decay in the emitter.

Randomly exciting 1,000 quantum resonances of the two-slit hypergraph will generate the accumulation of single quantum photon results noted above for this case. However, it is a lot easier just to use the two-slit analytic expression in the first place.