A theory of everything like matter action is a simple set of particles and exchanges and so a TOE must first define the matter and action of its particles. The matter-action universe has only one fundamental particle, aether, but aether manifests as four really illustrative matter-action particles: electrons, photons, quarks, and neutrinos. Atoms make up the matter of the universe as electrons, protons, and neutrons while photons and neutrinos fill the space in between matter accretions.

The quantum oscillation of matter is not consistent with static gravity relativity since quantum gravity  oscillates with phase and amplitude as well as having a quantum average mass. Gravity waves exist in space and time with phase and amplitude, but are very small except near black holes. However, a hydrogen atom results from the oscillating bond of an electron to a proton, all three with oscillating mass and charge. However, the proton and electron charge oscillations are of the same frequency while their matter oscillations are 1833 times different. The hydrogen atom forms from the emission of a Rydberg photon mass at 4.85e-35 kg that is entangled with the Rydberg photon of the same mass exchange that bonds the electron and proton.
This Rydberg biphoton mass entanglement represents the quadrupole dispersive force of attraction that is quantum gravity and so quantum gravity does oscillate at the frequency of quantum charge. All neutral matter gravity bonds by emission photons entangled with bonding photons and so all neutral matter shows the dispersive attraction that is gravity. Since space and time emerge from matter action, emergent space and time both show distortions of quadrupole dispersive gravity. While charge bonds are single photon exchanges, gravity bonds are biphoton exchanges. Since mass increases with the energy of motion, the fields that emerge are Lorentz invariant.
Unlike the dipole oscillations of single photon exchange bonds, which can either attract or repel, the ever so much weaker biphoton exchange bonds of gravity are always attractive since they are quadrupole oscillation bonds. Quantum gravity bonds involve the correlated exchange of Rydberg binding photons as well as exchange of Rydberg emitted photons. Of course, once two atoms get close enough, charge dispersion dominates over gravity and charge dispersion involves single photon exchange. Gravity is important once an object is massive enough to generate a density of states that allows gravity quadrupole biphoton exchange to act over large separations. Once an atom contacts the large body, quantum charge single photon exchange once again dominates.
Matter action then describes both charge and gravity with the exchange of quantum photons as quantum charge bond, quantum gravity bond, and social bond outcomes as well as the complementary scattering and conflict outcomes. Quarks and neutrinos are then just manifestations of the same matter-action exchange principle that emerges from a more fundamental principle of quantum aether exchange. The unbreakable gluon exchange bond of two quarks somehow reflects the nature of the whole universe. The odd neutrality of neutrinos that do not interact very much with matter and yet neutrino shine is present everywhere.
Quark pairs are the basic building block of protons and neutrons and there is no force in the universe that can break a quark pair bond. While the proton lifetime is the same as the universe, the neutron only lives about 15 minutes and decomposes into an electron, proton, and neutrino. Therefore, the neutrino is the basic matter-action exchange that bonds a proton to an electron.

We exist in a background of neutrino shine from stars along with CMB photon and neutrino shine from our universe creation. In a very real sense, both neutrino shine and CMB photon shine represent the basic aether exchange that bonds the matter-action universe. The basic principle of quantum aether resonance and exchange is then the single fundamental particle that makes up all matter as well as all action as aether exchange.
The resonance that drives the universe is the Rydberg mass resonance of the hydrogen atom, mR = 4.85e-35 kg with a 6.59e16 Hz resonance, which also sets the proton to electron mass ratio, 1833. The Higgs mass resonance at 125.1 GeV/c2, 2.23e-25 kg, and 3.03e25 Hz sets the proton mass as a resonance of three quarks, that comes from the Higg’s boson mass equal to the proton mass divided by the fine-structure constant plus the helium atom, mp / α + 4He.
The photon is an electromagnetic pulse in time and frequency moving at the speed of light, c, with average frequency, no, and polarization. A photon is a superposition of two orthogonal polarizations, which are correlated for a polarized photon or uncorrelated for an unpolarized photon. Photon exchange is the basic glue that binds all matter and so a matter A photon emission origin and a matter B photon absorption destiny B binds matter A and B.

Posted by steve agnew at 8:29 PM No comments:

Quantum spin magnetism is really one of the most enduring quantum mysteries and yet it is still not very well explained. And yet, spin is at the root of both the anomalous g-value as well as the fine-structure constant of spin magnetism. All quantum particles have spin magnetism as well as charge and classically, that magnetism is due to the classical spin of a sphere of surface charge. However, the quantum definition of spin is much more mysterious and luxurious.

A classical particle as a charged sphere does not have any magnetism unless it is moving...or spinning. However, a classical spinning particle does not also oscillate in spin amplitude nor show any quantization of spin. The magnitude of quantum spin magnetism is also twice that of a spinning classical sphere of equivalent charge… thus the luxurious quantum mystery of spin. Like the fine-structure constant, the g-value, g = 2, has a long quantum history and the g-value is also twice the classical magnetism due to the velocity of the spinning classical sphere surface, which turns out to be the speed of light divided by the fine-structure constant, c/𝛼.

Well, quantum electrodynamics, QED, precisely predicts the g-value = 2 (1 + 𝛼 / (2𝜋) +...) as a perturbation series and so the anomalous g-value prediction was and still is the most significant validation of QED and therefore of the standard model of nuclear physics as well. Schwinger in 1948 and Feynman in 1950 independently showed that the anomalous electron magnetic spin was due to the self energy of the electron magnetism. The electric field of the electron oscillates and that electric field change generates the spin magnetic field and both of those fields affect themselves as well. Gravity has no self-energy correction since gravity is a distortion of space and time and really not a field. Quantum electrodynamics precisely predicts the g-value as a perturbation series of a progression of Feynman diagrams, whose integrals predict the g-value to an arbitrary precision.

The muon is a second generation lepton that is much heavier than the electron but as a quantum particle, its wavefunction should still have the analogous QED self-energy correction given the mass difference with the electron. So the small difference between the muon measured and calculated g-values represents a great challenge to QED and the standard model.

One of the possible reasons for a difference is that the muon has a quite short lifetime of 2.2 microseconds. However, the lifetime of a particle should not affect the standard model QED calculation of the muon g-value...unless of course, this is the missing link for grand unification between charge and gravity forces.

A similar discrepancy showed up with precision measurement of muon hydrogen, the short-lived atom formed from the muon bonded to a proton. Despite it increased mass, spectrum of muon hydrogen should correspond to the predictions of quantum mechanics and yet there is a significant difference between the prediction of quantum mechanics and the measurement. The interpretations vary from the proton diameter was incorrect or one should use quaternion calculations. Neither of these explanations depends on the muon lifetime.

The universe is a pulse of matter in the many billions years of cosmic time that I call the Grand Wavefunction. The Grand Wavefunction of quantum gravity is not yet unified with the quantum wavefunction of muon lifetime 2.2 microsecond pulse. The ratio of the muon and universe pulse lifetimes is 2.6e-24 and the dimensions are atomic/cosmic seconds, which is a fundamental axiom of the matter-action universe. The ratio of muon mass 1.88e-28 kg and 2.2e-6 s lifetime is its decay rate as 8.54e-23 kg/s. The universal decay constant, mdot = 1.12e-10 kg/s, is what drives all force and for muon weak force decay to an energetic electron and two neutrinos as

The fine-structure constant is a measure of the coupling of spin magnetism to the orbital magnetism of electron orbital motion. The coupling of spin and orbital magnetism results in spectral lines that Michelson and Morely first measured as the fine-structure constant in 1885. Nevertheless, it still took some 55 years for Sommerfeld to explain the fine structure quantum nature in 1940, some 16 years after the Schrödinger equation in 1924. 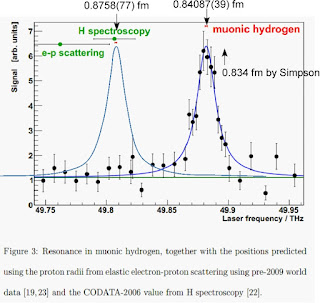 Thus, there is a dilemma. What is the real proton radius...0.8758 or 0.84087 fm? Both measurements of electron hydrogen and muonic hydrogen appear to have sufficient precision to preclude each other.

One alternative explanation is in the universal decay of aether, which means energy states also depend on their lifetimes. In aethertime, incorporation of the muon lifetime shifts the spectrum of the muonic hydrogen to now agree with that of atomic hydrogen. The shift is

which the figure above shows as 0.075 THz, which now agrees with the observed 0.072 THz and well within the precision of that measurement.

Posted by steve agnew at 3:18 PM No comments:

Quantum Intuition is Beyond Order and Beyond Chaos 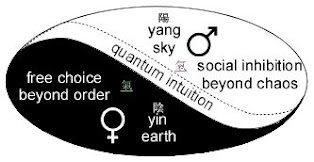 Free choice is then a result of quantum intuition and is therefore beyond the order of social inhibition and also beyond the chaos of individual free choice. Beyond order and beyond chaos we find our way from the superposition of quantum intuition and rely on the grand narratives of Western Civilization as well as other people for our morals and ethics.
Posted by steve agnew at 8:46 PM No comments: