Why Does the World Exist?

The recent book by Jim Holt Why Does the World Exist interviews a number of philosophers, religious scholars, and scientists and provides a wide litany of the standard answers to this infinite philosophical discourse. Somehow Holt felt that he could write a whole book about the dark nothing of empty space and people would actually buy it and read it...and I did...

Holt supposes that nothing would be a much simpler reality than the world that exists but he somehow does not really explore the inherent paradoxes of the infinities of nothing. As a result, infinity does not seem to bother Holt and he seems quite comfortable with the simplicity of infinity.

A statement that nothing could exist seems to contradict itself. Much like the square circles or married bachelors that Holt twice mentions, supposing nothing as something is a similar foil of words. Simply asking a question with words does not mean that the question has any meaning or any answer either.

The finite universe exists and is what existence means. Existence is simply a belief that we acquire as young children around two years of age as we learn consciousness. We simply learn to accept the belief about the universe of existence consisting of sources and observers of sources that undergo action and therefore change with time. The dark lonely nothing of empty space is a convenient object that we use to represent the universe itself and therefore empty space helps us keep track of the objects of matter within an otherwise empty universe.

The shrinking decoherence of aethertime defines both the gravity and charge of our quantum universe. In a universe of matter and time, space and momentum are just convenient representations that are consistent with sensation and neural thought. Each of general relativity and quantum charge exist as overlapping regimes of quantum aethertime. 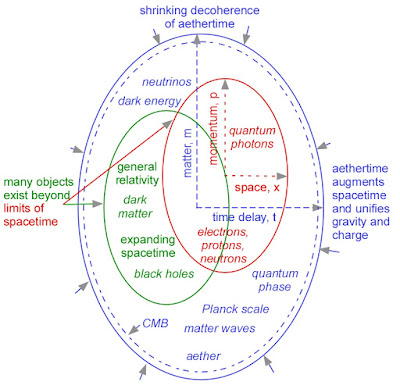 Asking why the universe exists is then the same as asking why existence exists; the question's answer is a circular identity. Such identities are useful in that they allow us to know the boundaries of what we can know. There is no empty universe devoid of sources because the only universe that we can know and that can exist is one that is full of sources and observers all changing in time. The notion of a mostly empty universe filled with just a few sources is a useful one just like the number zero is useful for describing the absence of having something like an apple, but the notion of empty space is fundamentally limited and flawed and does not describe all changes in the universe.