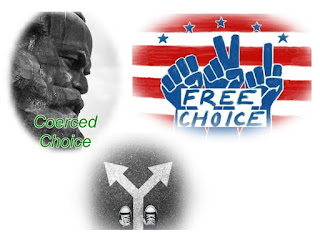 Prosperity comes from the incentives of individual free choice while social control and government coercion deincentivize human initiative and therefore prosperity as well. Marx in his Communist Manifesto encouraged revolutionary social control by a compassionate elite and many argue even today that it is only government coercion by an elite party that will deliver outcomes like universal healthcare and guaranteed employment.

Free choices to invest your own limited resources into any of education health care, leisure travel, and so on, is an equitable way to distribute the limited resources of an individual. In contrast, the ideology of government coercion by an elite rations those limited resources and picks winners and losers. Slavoj Zizek argues in his The Relevance of the Communist Manifesto that the growth of capitalism has resulted in the historical deadlock of Marxism. In fact, Zizek argues that even though capitalism has had and continues to have repeated crises, capitalism emerges from each crisis stronger and not weaker. As a result, Zizek concludes that capitalism is much more resilient than Marx ever supposed it would be.

Correspondingly, Communism and Marxism are much less resilient than Marx ever supposed. Communism and Marxism also go through repeated crises, but in contrast to capitalism, Marxism emerges from each crisis weaker and not stronger. This is fundamentally because government coercion does not deal well with the anxieties and emotions of unknown risks, which are the cause of most crises. Despite the many dismal failures of prosperity under Marxism, there is an enduring modernist Marxist view that the current historical epoch of selfish free choice capitalism will eventually end. However, Marx argued in 1848 that only when civilization develops a more coerced compassion enforced by an elite to eliminate the selfish individual free choice of capitalism.

A key Marxist notion is the labor theory of value where the profit of selfish capitalism necessarily exploits labor and there is a struggle between capital and labor. Marx argued that government should own all resources and distribute the profit of labor equitably among all people. Government should then distribute all property and wealth and replace the free choice of selfish private ownership with the coerced compassionate choice of government ownership. Of course, government is also a hierarchy of competencies as Jordan Peterson notes in his classic 2018 debate with Zizek in Toronto, CA. The many flaws Marx noted of capitalism are flaws of human nature and not really capitalism.

Covid and the Free Choice Manifesto

The Free Choice Manifesto is all about a trade-off between a selfish individual free choice and a compassionate socially responsible coerced choice. Compassion is an emotion that promotes bonding between people while selfishness is an emotion that promotes conflict between people. Both compassion and selfishness are necessary emotions for survival, but the balance between compassion and selfishness is a never ending dialog. While Marx's Communist Manifesto represents an extreme compassion of the Chinese government to coerce social responsibility, in contrast, the Western individual Free Choice Manifesto represents selfish individual free choice.

The Covid shutdown is an example of government coerced choice justified by the compassion of social responsibility in limiting the Covid spread. The coerced Covid shutdown tests the limits of free choice...does the social responsibility of Marx's Manifesto justify the coercion of Covid shutdown or rather does the selfish individual Free Choice Manifesto win? Some suggested that Chinese government coercion was inherently better able to control Covid than Western individual free choice.

Wisdom emerges from our classical knowledge about what we know is not false, from reason that tells us what is not true, and from quantum intuition giving us our feelings of what is uncertain. Instead of knowledge being what is true and reason telling what is therefore false, knowledge tells us only what is not false and reason tells us only what is not true, because there are also uncertainties and unknowables in knowledge and reason. Our quantum intuition is what makes free choice uncertain and unpredictable since we cannot know everything about quantum phase and therefore about how we feel. Even though every free choice outcome has a precursor feeling, there are precursor feelings that we simply cannot know and yet are still part of the universe as quantum unknowables. Thus we cannot know everything about free choice even though we often rationalize with reason our feelings after we make a free choice.

Covid is very infectious and seemed at first to also have a higher mortality than the flu. Covid models then incorrectly predicted insufficient hospital capacity and those predictions resulted in much anxiety. Models incorrectly predicted that Covid would overwhelm U.S. hospitals, but that really did not happen and was overblown. Now that we know the risks of Covid as a chronic and endemic infection, individual free choice instead of government coerced choice determines our outcomes.

People with new knowledge of the Covid hazard can now freely choose an acceptable level of risk and yet succeed in life just like people must accept risk from many other common hazards. The Free Choice Manifesto of the individual once again shows the fallacy of Marx's Communist Manifesto of government coercion. People don't first of all need government coercion to succeed, people first of all need free choice to succeed in a universe of things that happen.

Posted by steve agnew at 7:20 PM No comments: