There are five life goal complements that each define a spectrum of desirable outcomes from which we choose a particular outcome. Each life goal consists of many trade-off precursors of delayed gratifications and sacrifices that altogether mean that life is not necessarily made up of straightforward choices. In fact, we often do not even know why we make some of the choices that we do make since feeling derives from the unconscious archetypes of consciousness. The particular choice of individual freedom versus group authority represents a classic choice between more or less acceptance of group authority and hierarchy versus less or more individual freedom. 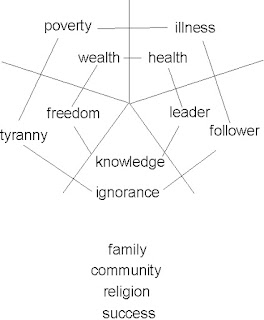 Each life goal may also focus on one or all of family, community, religion, individual success, or curiosity as well.

It is by our feeling that we choose action or inhibition and feeling is a superposition of a spectrum of five emotion complements. Each person's emotion complements make up their personality spectrum by how they respond to others. The emotions of pleasure and anxiety, for example, are particularly important for survival while compassion and free choice are very important for the bonding of people into groups or communities.


A superposition of five personality factor complements makes up each personality with emotion complements that determine how people bond or conflict with others. These five personality complements reflect the subconscious archetypes of consciousness that we first learn as children and then also as adults. The free choice that we share with others depends on feeling and the meaning and purpose of life is in how well people interact with each other as well as on how well people survive. Personality factor complements represent how we interact with others in that if we are sensitive to others feelings, they will be more likely to share their free choice with us as stories.

Although it may seem like polar opinions necessarily result in divisive politics, people rarely really completely agree about many things and divisive politics seem to be rather inherent in human nature and not just a result of polar opinions. There have been even more polar electorates than today and when it comes right down to it, there are polar opposite arguments and feelings for every political issue. Legislation, after all, is the bonding of polar opposites into some kind of compromise and the laws that bind civilization with exchanges of ideas are analogous to exchange of light that bonds matter’s polar opposites, electrons and protons, into neutral atoms.

It goes without saying that each side in an argument has some claim to virtue and superior morality but for either side to deny the virtue of the other side does not usually facilitate civil discourse. Each of us has a set of unconsciousness archetypes that are the basis of our feeling and consciousness and personality. These unconscious archetypes define how we feel about things that happen to us and it is by feeling that we choose outcomes from precursors.

Posted by steve agnew at 9:33 AM No comments: