If a person and the earth were both growing in size and gravity was shrinking at the same rate, the person could not tell since what they say and felt would not change. Growing matter and shrinking gravity would then explain gravity as long as gravity decreased at the same rate. The force of shrinking gravity in direct proportion to matter growing would mean that universe is made up of both growing matter and shrinking force.

There is a cosmology that unifies charge and gravity based on the exact opposite, which would be a universe of shrinking matter and commensurate growing force. In fact, a famous quantum physicist Paul Dirac first proposed the Dirac large numbers hypothesis in 1937, which set the ratio of the size of the universe to the size of the atom to the ratio of charge to gravity force. 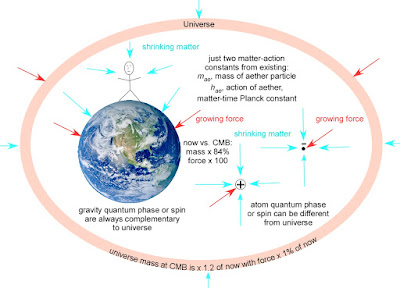 However...if outcome matter shrinks and forces grow, this would explain why precursor galaxies are red-shifted and explain why distant galaxy spectral line splittings do not change. In fact, it means that our reality is actually changing very, very slowly and it takes literally hundreds of years to measure the change...or much greater precision than current measurements provide. However, very soon high precision measurements will be able to measure these changes. Such measurements will show neither string theory nor quantum loop gravity nor supersymmetry nor multiverses are valid. In fact, string theory can never be disproven because it can explain anything...therefore string theory has no predictive value.

The notions of outcome matter shrinking and force growing are consistent with quantum cause and effect of the precursors and outcomes of both gravity and charge and so does represent a unified theory of everything. However, the universe is then first of all a quantum causal set where there are many possible outcomes to any given precursor. A quantum causal set universe is not then determinate, unlike Einstein’s relativistic gravity in macroscopic time and space.

Time then emerges from electron spin period and space emerges from electron charge radius and electrons, protons, and neutrons and the entire universe is made up of discrete quantum aether particles. There are then only two constants from which all other constants emerge; the mass of a discrete aether particle and the action of that same discrete quantum aether as the matter-time Planck constant.

The Planck constant is the proportionality between light’s frequency and its energy and is the basis of our physical reality. Max Planck derived light’s quantum to explain why microscopic charged matter of electrons and protons did not behave like macroscopic charged matter. The matter-time Planck constant is likewise the proportionality between aether frequency and its mass as energy. In matter time, just as in Einstein’s relativity, energy is proportional to mass times the speed of light squared, E = mc².

With matter action, time and space emerge from aether action: time from aether spin period and space from aether radius. This makes discrete aether action consistent with both gravity relativity as well as quantum charge, but now as a discrete aether quantum causal set. All other particles emerge as aether condensate outcomes and constants as aether precursors and in particular, the cosmic microwave background surrounds us with the light of creation precursors. Creation was the condensation of a certain very small fraction of precursor aether into the 2.7 K microwave, electron, proton, and neutron outcomes of all of our atoms today. Each atom today exists as a result of the emission and action of light at the CMB creation.

Posted by steve agnew at 9:39 PM No comments:

Surreality of Time and Space

There has not yet been a single math foundation of our reality, rather there have been two rather incompatible maths and yet both depend on the realities of continuous space and time. The math of relativistic gravity shows the direction and velocity of discrete macroscopic objects as they move through continuous space and time in one determinate direction. The math of quantum charge, in contrast, shows the direction and velocity of discrete microscopic objects jump in many directions and even forward and back in time, ostensively through that same continuous space and time. Whereas a gravity outcome is determinate and certain, a quantum outcome is probabilistic and uncertain. While gravity outcomes are determinate and not subject to free choice, quantum outcomes are subject to free choice.

A gravity clock always ticks forward, but a quantum clock can tick in either or both forward and reverse. Each quantum moment is then a superposition of the past along with many possible future moments. The discrete moments in quantum time superposition eventually phase decay into the reality that agrees with gravity time, but before that, quantum time represents a fundamental confusion between gravity past and gravity future.

For a determinate gravity path in space, there is a determinate path from precursor to outcome that has some chaotic noise along the way. Every infinitely divisible step on the path is determinate and so there is no free choice since there is no quantum phase decay despite an infinity of steps. Precursors completely determine each outcome and there is no entanglement of the quantum phases of any other outcomes. This means there is a shortest path called a geodesic whose outcome does not change unless there are outside forces that act. A Hamilton-Jacobi equation then predicts any action by using the difference in kinetic and potential energies, called the Lagrangian.

A probabilistic quantum path does not follow a single determinate geodesic path, but rather each step of a quantum walk is a result not only of precursors, but also a superposition of the quantum phase of many possible discrete outcomes. The steps in a quantum path are limited by the fundamental granularity of the universe. Each step therefore involves a free choice that entangles those many outcomes and so the path is always probabilistic and never determinate. A quantum outcome is not only determined by its precursors, but also by the phase entanglement of other outcomes.

The entanglement of quantum phase between two two gravity bodies means that the precursors of continuous time and space determine gravity outcomes. The math foundation of our reality is actually based on the discrete matter action of outcomes from precursors. Instead of the two notions of gravity and charge based on continuous space and time, the notions of time and space actually emerge from our primitive reality of quantum matter and action. For discrete quantum charge, it is easy to show how discrete outcomes are the progeny of discrete matter and action precursors. The archetypes of continuous time and space then emerge from discrete matter action outcomes of quantum single photon charge. Time emerges from electron spin period while space emerges from electron charge radius and the Hamiltonian Schrödinger equation and the total energy is the math, but quantum phase links matter and action.

Posted by steve agnew at 9:39 PM No comments: