This video addresses two age old problems of free choice: the problem of the determinist and the problem of a person knowing everything means knowing what will happen and that person can then change their mind anytime in spite of knowing what will happen. These two arguments are very similar to the equally old religious teachings of the Swiss determinate choice religion of John Calvin and the free choice religion of Dutch Jacobus Arminius.

On the one hand, the video argues that determinate physical laws would mean that everything is predetermined and there is no free choice, which is Calvinist determinism. Calvinists simply believe in the illusion of free choice. The video terms this metaphysical as the figure shows. 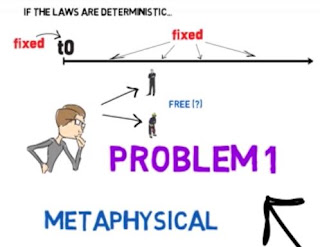 On the other hand, the video further argues that with complete knowledge, all outcomes would be published in a book of life and a person can then just look up to see what will happen to themselves. But then the video further argues that since someone can look up what will happen to themselves, like a light bulb turned on, they can still then choose to do something different from what was in the book and turn the light bulb off. The video terms this epistemological and argues that a determinate outcome is not possible since the book of life is always subject to the Arminius free choice. 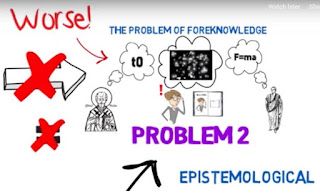 However, we actually live in an uncertain quantum causal set matter-action universe and not in a determinate universe of space and time and so Arminius was right, not Calvin. There is no quantum book of life that tells us with certainty what will happen. Quantum uncertainty means that the observer of a light bulb necessarily does affect whether the observed person turns the light bulb on or off. Moreover, unlike the particular determinate precursor in the video of the outcome of the light bulb state, there is no way to know for certain the corresponding quantum precursor for the same outcome of the light bulb state.

Science has known about the irrational nature of quantum uncertainty for many decades and yet both philosophers and scientists continue to argue about what this irrational quantum uncertainty means. After all, many argue that our classical rational and causal world does not appear to be quantum. This is because our macroscopic reality of relativistic spacetime gravity does not seem to involve the microscopic uncertainty of quantum phase even though quantum uncertainty is most certainly there at the microscopic scale. Quantum phase is after all just the problem of there being an unknowable precursor for the outcome of who switches their light bulb on first...John Calvin or Jacobus Arminius.

These arguments about determinism versus free will all come down to given the free choice between good and evil, some people still choose evil in spite of any all-good ideal. In a determinate world, the coerced choice of evil is not their fault but merely reflects the precursors of their particular life. Given free will, however, it is always possible to choose evil despite an otherwise all-good ideal and so there cannot be a perfectly all-good ideal after all.

We have feelings about things that happen and it is by our irrational unconscious feelings that we choose, not by rational conscious reasoning. Since we can never completely know why we feel the way that we do, we can never precisely know why we choose what we choose. In fact, the essence of free choice is in choices that are causal with precursors but still do not have knowable precursors and so precursors are not all written in any book of life. The archetypes of free choice and feeling then do not result in any determinate outcomes because neither free choice nor feeling have completely predictable outcomes either.