There are three related by still different descriptions for electromagnetism with the first being the through-space electric and magnetic fields of Maxwell equations at the top of the figure below. By far, the Maxwell equations are the most useful for predicting electromagnetism, but are limited for relativistic or quantum conditions. The second way to describe electromagnetism is with the four-vector potential of four-space of relativity, as the second figure, and the description helps define relativistic electromagnetism. For quantum conditions, a third description involves is a space filled with the virtual photons of quantum electrodynamics as the third figure shows. All three descriptions propagate electric and magnetic fields between objects and all three are useful in their limited realms.

There is then a fourth explanation, aethertime, a discrete aether in time that can also be a quasi-continuum of aether in time. Instead of a photon being a fundamental virtual particle, a photon is a stationary aether excitation in a universe of decaying aether. It is all matter that is in motion relative to this photon rest state and that aether decay drives both charge and gravity actions.

Motion in continuous space involves the exchange of aether particles among objects while motion of charge involves the exchange of aether photons and photons carry both electric and magnetic fields. Thus it becomes quite straightforward to represent electromagnetic fields with aether exchange in the same way that virtual photon exchange with vacuum oscillators represent electromagnetic fields. However, instead of the infinity of vacuum oscillators that is QED, aethertime has a large but finite number of discrete aether.

Just as the principles of QED are not more useful than Maxwell’s equations for representing the vast majority of action in EM, aethertime likewise is not necessarily more useful than the three above tools. However, at the singularities of continuous space, motion, and time, the second dimension of time, aether decay time, keeps the clock running and the lights on. The event horizons of a black hole and the expanding universe both are transitions from fermion matter to boson aether. The only true event horizon in aethertime is where it belongs…defining the edge of the aethertime universe.

The tenets of aethertime represent the same reality as mainstream science for EM, quantum, and gravity. However, the notions of continuous space, motion, and time are limited by the event horizon singularities of mainstream science; very small scale, black holes, and the universe event horizon. Furthermore, the inner core of a neutron star also appears to have a boson singularity. 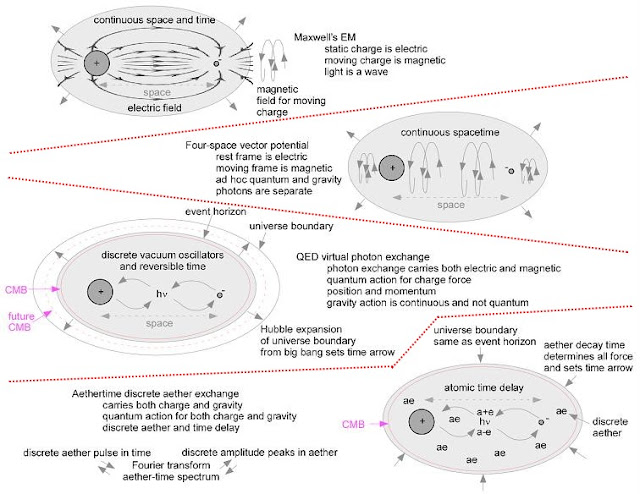 The CMB represents a very uniform light emission at 2.7 K from the creation of hydrogen and other light elements. In the shrinking aethertime universe, the CMB temperature is actually 0.64 K in its rest frame where the speed of light at the CMB is only 6% of c, the value in this epoch. The surface temperature of the CMB would then be related to the ionization energy of hydrogen in that epoch and a black hole today would therefore now be at the ionization energy of hydrogen, 13.6 eV or 158,000 K. At this temperature, the UV emission from hydrogen is called the Lyman series and the Lyman alpha band is a prominent feature of many active galactic nuclei with z > 2.

In fact, very large Lyman alpha blobs of hydrogen gas in the very early universe seem to be associated with new galaxy formation with a particularly large LAB called Himiko appearing at z = 6.6. The recent report of a galaxy at z = 8.7, EGS8p7, that shows Lyman alpha emission is further consistent with the very early formation of galaxies around black holes.
Posted by steve agnew at 8:53 PM No comments: