Stonehenge and the Full Moon

In our modern age, we tell time largely by the passage of the sun and the solar day and that means that the sun and not the moon largely determines our modern time. However, people have always used the moon as a way to tell time along with the sun and the legacy of lunar time persists in the calendar month as one cycle of the moon and week as a moon quarter. As a result, lunar time is still deeply embedded into the consciousness of humanity along with solar time.

Stonehenge is an ancient solar and lunar calendar in Wiltshire, England, that is an arrangement of stones called henges and holes for wooden henges that tell both solar and lunar times. Constructed around 2,600 BCE (over 4,600 years ago) and used for over 1,000 years, the main alignment of Stonehenge shows the directions of the summer and winter solstices as well as spring and autumn equinoxes as shown in the figure below. This alignment with the solstices tells a solar time of year by the sunrise and sunsets of solstices and equinoxes at right angles to the solstices, the four solar celebrations of the ancient Druids.

Stonehenge also tells lunar time with an inner circle of 30 Sarsen stone henges that represent the 29-30 days of the lunar period along with an outer circle of 56 Aubrey pits (wooden henges) that count moon periods and lunar years. Since there are 14 moons for each lunar year, the Aubrey circle counts 4 lunar years with its 56 pits. There are also 7 lunar years for every 8 solar years for the winter/summer solstices of the Stonehenge calendar and that product shows 7 x 8 = 56 lunar solar yrs. 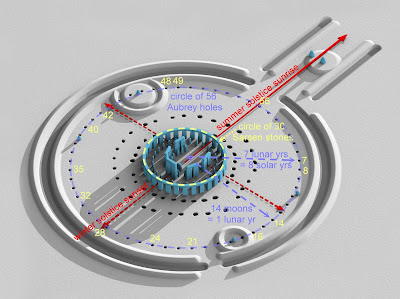 In addition to being a solar calendar of the 4 solar celebrations of solstices and equinoxes, Stonehenge also counted days in a moon period as well as moons in a lunar year in order to intercalate four lunar celebrations. A lunar calendar counts the 14 moons for each lunar year, which means 4 lunar years in the 56 Aubrey holes along with 14 solar years by counting 4 solar celebrations. Solar solstices and equinoxes along with full moons have all traditionally marked Druid ceremonies and that tradition continues today for many modern holidays. From the Chinese New Year’s to Easter and Yom Kippur, the cycles of the moon therefore continue to impact human behavior. Even today, knowledge of the full moon is further helpful for harvesting and hunting and other outdoor activities as well as prediction of the ocean tide.

Many people have proposed that the Stonehenge calendar also predicts solar and lunar eclipses. While it is certainly possible to use a Stonehenge solar-lunar calendar to predict lunar and solar eclipses, eclipse predictions need further knowledge of a third cycle, the Saros 18 yr cycle, and discerning the Saros cycle necessitates centuries of fairly accurate astronomical observations. The day of solar and lunar eclipses repeat every Saros cycle of 18 years and this period predicts both lunar and solar eclipses. During each 18 year Saros cycle, there are about 40 eclipses and so the Saros cycle requires not only a fairly accurate calendar, it requires several centuries of careful observation with reasonably clear skies.

It is not clear that the knowledge of the Saros cycle of eclipses was available to the ancients of Stonehenge and the less than optimum visibility of the sunrise, sunsets, moonrise, and moonsets in that climate would suggest that eclipse predictions would have been very unlikely. Since predicting the time of year and phase of the moon did offer distinct survival advantages, Stonehenge makes perfect sense as both a solar and lunar calendar. However, the precision of the Stonehenge calendar does not seem consistent with the long-term observations needed for eclipse predictions.

Humanity today adjusts our modern calendar month to the rhythm of the solar day and year and we have therefore lost much of the ancient lunar rhythms that tell time with the variable periods of the full moon. A solar calendar month averages 30.4 days each over a non-leap 365 day year, whereas the actual lunar month is 29.53 days for an average full moon period. And yet the periods of the full moon still affect things that happen to humanity. For example, the average female menstrual period is 29.1 days and is closer to the 29.5 days of the average full moon than to the 30.4 days of our average calendar month. In fact, the average gravity period of the lunar orbit is 27.6 days, which is also an important cycle for the changes of full moon periods.

There is a cyclic variation of the period of the full moon due to the coupling of both lunar and solar periods and it is that variation of the full moon period that affects the tides and weather patterns associated with those tidal flows. So the full moon period does have demonstrable affects on human behavior and there is a long history that associates phases of the moon with various behaviors. The word lunacy, after all, comes from the lunar root and the poetry and behavior of people has long association with the lunar phase.

The cycles of lunar full moon period or number of days, though, do not have the same popular following as does following the phases of the moon. The cycles of the lunar period are mainly due to a beating of the period of the full moon, 29.53 days, with the period of the gravity moon orbit, 27.55 days. These two lunar periods result in two beat cycles of 1.13 and 8.85 yrs and that means that there are roughly seven lunar years as cycles of moon periods for every eight solar years. This means that there are 56 moons in 4 lunar years along with 14 solar years with 4 solstices/equinoxes to make the 56 solar celebrations in 14 solar years. There are also 4 lunar celebrations to make up the 8 celebrations of each Druid year.

The Chinese lunar calendar is several thousand years old and places the winter solstice in the eleventh lunar month, which means the New Year is usually the second new moon after the winter solstice. The Christian Easter is the Sunday following the first full moon after the spring equinox, but as determined by the ancient Nicene and not a modern calendar. There are many other religious holidays that remain anchored to the full moon period and so continue to affect human behavior.

The fractional periods of the moon relative to the solar periods make moon predictions difficult. Lunar calendars are always therefore more complex than solar calendars and this was true for ancient peoples of the Stonehenge. Knowledge of the Saros eclipse period of 18.03 years predicts both lunar and solar eclipses, traditional harbingers of fortune, but the Saros period takes many years of observation. The Saros period comes from the moon period between when it crosses the sun's path, which is 27.2 days. This lunar cycle beats at 18.6 yrs and 18 yrs is the intersection of the three lunar periods.

The variability of the period of the full moon is quite well known and largely due to the beating of the full moon period of 29.53 days with the period of the lunar gravity orbit of 27.55 days. The beating of these two frequencies results in a variation of full moon periods with cycles of both 1.13 and 8.85 years as shown in the figure. The precise measurement of the earth-moon distance with a reflected laser pulse has shown that the earth-moon distance increases by 38 mm per year. Given the 384,400 km average earth-moon distance, 38 mm/yr means that the moon orbit period slows by 0.31 ppb/yr, very close to the expected 0.26 ppb/yr of classical aethertime decay, but far less than the variability due to other factors.

This figure shows the period of full moons as a function of fractional solstice year where each year begins on the winter solstice, Dec. 20th. The coincidence of the winter solstice with a peak in the full moon period occurs every 8 solar years, but only seven lunar years. This fundamental difference between solar and lunar periods is what the stone and wooden henges seems to represent. 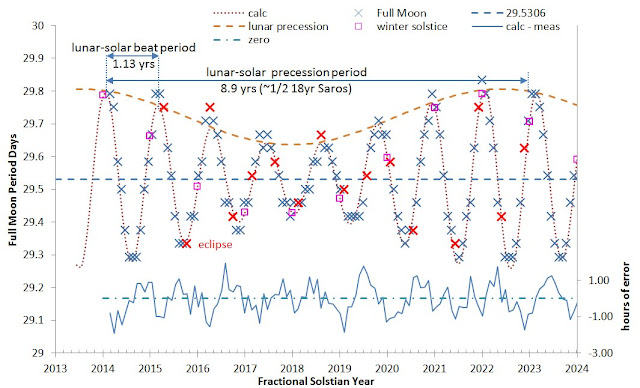 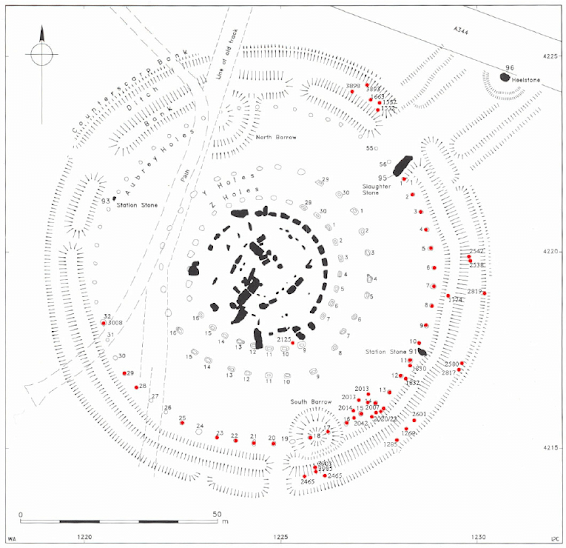 Posted by steve agnew at 4:45 PM No comments: