Thus, radiant quantum gravity satisfies the virial theorem without dark matter by transferring momentum from the bar to the disk stars. So no cold dark matter halo is needed around the galaxy to satisfy the virial theorem and instead, it is the coupling of vector gravity waves from bar to disk that satisfies the virial theorem without dark matter.
Unlike the very short range quantum forces of dipole radiation and single photon exchange, quantum gravity is a very long range force at the cosmic scale with quadrupole radiation and biphoton exchange. Quantum gravity includes not only scalar forces of mass between stars, but quantum gravity also includes vector forces that couple the motions of radiating stars.
The virial theorem is a simple statement that the potential energy bonding a set of bodies together must be equal to the kinetic energy of those bonded bodies. There are many cosmic examples like galaxies where the kinetic energies of stars of a galaxy do exceed the potential energy of Keplerian gravity, but do not exceed quantum gravity. Science has thus concluded that dark matter halos must make up over 95% of the mass of a galaxy even though there is no measurement for dark matter. 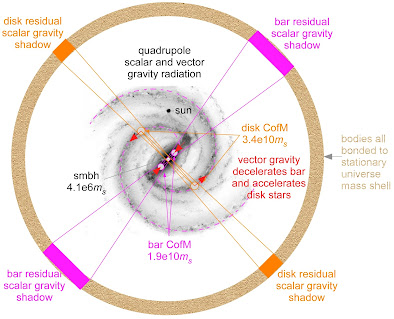 Posted by steve agnew at 6:24 AM No comments: