Causal set quantum gravity supposes a discrete universe made up of very small granules and those granules seem a lot like discrete aether, which is 8.68e-69 kg and 1.2e126 discrete particles make up the universe today. The axioms of these granules are that they act on each other in ways that are transitive, non-circular, and finite. Time and space in a granulated universe are not continuous but rather time and space simply emerge as continuous interpolations of the large numbers of discrete actions of discrete granules.

The prescription of a Hamiltonian to a causal set is complicated by the lack of a continuous space or time variables in the granulated universe. The dynamics of a causal set come from parental actions that occur between causal subsets of particles that lead to progeny and from those family histories then emerges what we call space and time. Thus, by its very definition, a causal set is always changing and today, the universe of discrete matter decays just as it's discrete actions grow.

Although the notion of a granulated universe has been around since 1991 (Sorkin 1991), it has not really received a very wide acceptance by many in mainstream science. Although causal set granulation does formulate a quantum density matrix for gravity, the granulated quantum gravity has not yet resulted into any further insights into the conundrums of gravity. Just as the quantization of electromagnetic fields resolved the singularities of quantum charge, granular quantum gravity does remove the singularities of gravity, i.e., black holes.

The gravity of a black hole deflects and blue-shifts light as the figure shows. The skimming light exchanges momentum with the black hole but if the light skims closer than about a wavelength to the event horizon during its journey, that light phase entangles the black hole phase at the two points shown and the photon gains energy but is not absorbed. This phase entanglement means that the states and entropy of the black hole are now in a superposition of light states with those in spacetime. 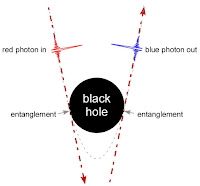 The black-hole surface represents a phase boundary between light, which is the action of matter, and the black-hole matter and actions that exist as transitive, non-circular, and finite granules. The notion of a granulated black hole is also consistent with the holographic principle, which supposes that black holes preserve information as a hologram on their surfaces.

Causal sets and the deep structure of spacetime, Dowker 2008

FQXi Discrete Aether and Action as Fundamental
Posted by steve agnew at 2:57 PM No comments: