Deflection of Starlight by the Sun

The first verification of Einstein’s relativity came with the observation by Eddington during an eclipse in 1919 of starlight deflection passing close to the sun. Einstein had predicted in 1915 that the sun's gravity would deflect star light, but it actually took many more years to really put this issue to bed. This is because there are two separate but equal terms for that deflection and it even took Einstein time to realize that this was so.

The first term is due to the mass-energy equivalence (MEE) of photon energy and is really then just the Newton deviation of classical gravity of an object trajectory close to a massive body is shown in Fig. 1 and is based on just gravity and mass equivalent momentum. In other words, there is both a classical Newtonian deflection of star light as well as relativity's deflection of light by gravity. The real question is why relativity predicts twice the deflection as predicted based solely on Newton's gravity, but including the mass equivalent energy of light. 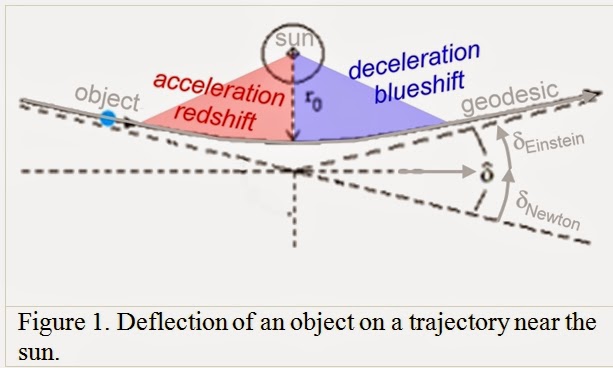 And of course, since the energy of a photon is equivalent to a rest mass, this is the Newton deviation for a photon particle as mass or momentum as well. These units are all in radians, Eqs. 1 and 2, where 2π radians equals 360°, [1], [2].

The fact that these two effects, gravity MEE and time delay, are equivalent but distinct was not immediately apparent to Einstein and others in 1915, but eventually Einstein recognized that his relativistic deflection was indeed twice the Newton gravity deflection for light in a vacuum. So the total deflection is the sum of both Newton and redshift contributions as Eq. 4:

The original Eddington results from 1919 showed a deflection of the starlight by the sun, but those results had a fairly large uncertainty as shown in Fig. 2 and so really did not validate Einstein's Eq. 4 over Newton's Eq. 2. Since then, many different kinds of measurements have indeed verified the extra gravity deflection of light predicted by Einstein. Figure 2 shows starlight deflection data from the 1976 eclipse along with the Einstein and Newton predictions along with the range of data from Eddington in 1919. Although there is substantial scatter in the measured deflections, this paper confirmed Einstein’s prediction over Newton's with a 95% CI. 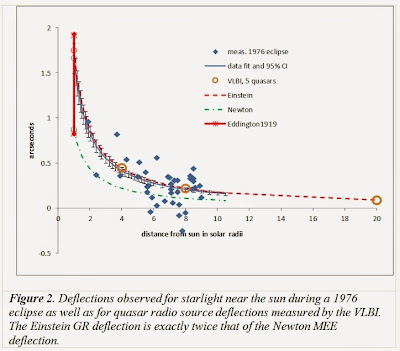 The much more precise time delays of quasar sources across the sky by VLBI radiotelescopes measures time delays between stations across the width of the earth, ~6,000 miles, to derive the same light deflection for these radiowave quasars. A more generic expression that is valid for objects across the entire sky is Eq. 5 as

where the angle, theta, is the elongation angle between the sun and the source and g = 1 for GR and g = 0 for Newton.

Figure 2 also shows the three of the five much more precise VLBI results reported in a 2015 paper for a series of VLBI measurements of quasar time delays from 1991-2001 that also followed the expectations of Einstein’s relativity and gamma = 2. Unlike the measurements that depend on an eclipse, measured VLBI time delays occur throughout the year and over ten years and showed circular paths for each of five different quasar radio source deflections. One example is the blazar 1606+106 deflections in Figs. 3 and 4.

This data revealed very precise measurements of the deflection of quasar radio signals over the course of ten years for quasars that were located at the minimum angle 30.9° from the sun, a much greater elongation angle than any previous report. Once again, these datasets support the deflection predicted by Einstein’s relativity and gamma = 1 over that of the mass-energy equivalence of light and gamma = 0.

Instead of measuring starlight deflection only during an eclipse, the VLBI measures radio source deflection over an entire year for all of ten years. Each quasar radio source reveals a circular pattern that shows the same deflection observed with the eclipse datasets. Figures 3 and 4 show the deflections of blazar 1606+106 that is located 31° or 124 solar radii from the ecliptic and would be the elongation at the maximum deflection. 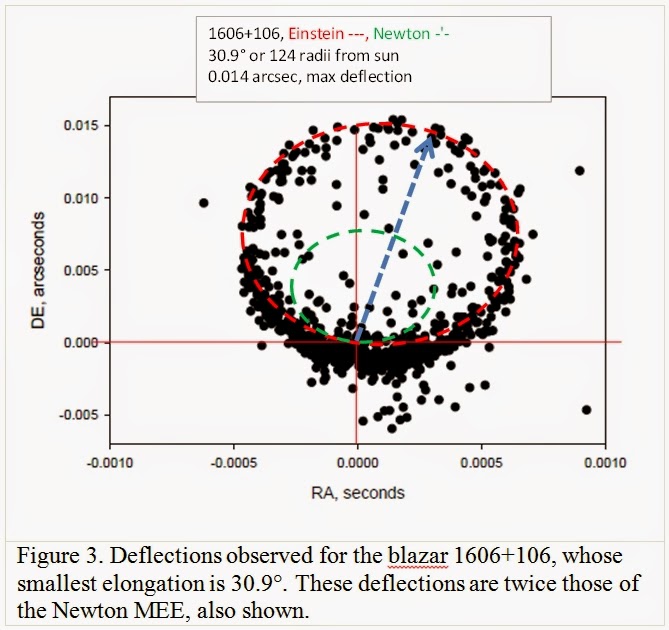 The much more precise VLBI data is also consistent with the nature of relativity to an extent that seems quite convincing. However, there are still other explanations besides Einstein’s relativity for the deflections of starlight and radio sources that are fully consistent with these measurements. These results all derive from approximations that use only the leading terms of various series expansions to simplify the complex tensor algebra of the relativistic equations. As a result, these same approximations are actually valid for any number of alternative scenarios as long as they all incorporate the same basic principle of mass-energy equivalence (MEE), i.e., E = mc2. 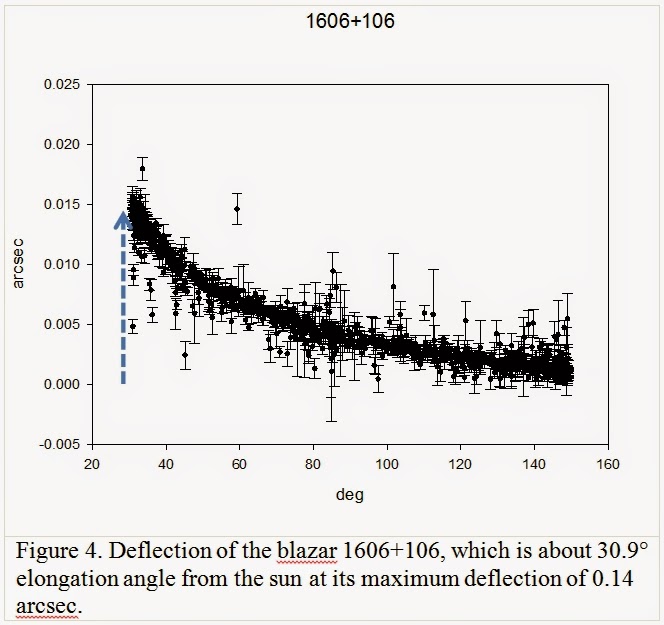 A spherical gradient index lens, for example, deflects starlight in the same way as a gravity body like the sun. For a gravity lens, the starlight first redshifts in its approach and then blueshifts as it leaves the gravity field deflected as shown in Figs. 1 and 5. Similarly, for a gradient index lens, the starlight redshifts and delays as it travels the index gradient and then starlight blueshifts as leaves the index gradient. Similarly, a body of mass accelerates and gains energy upon entering a gravity gradient, then decelerates and loses energy and is also delayed upon traveling the same gravity gradient, but only one-half as much delay as the starlight. 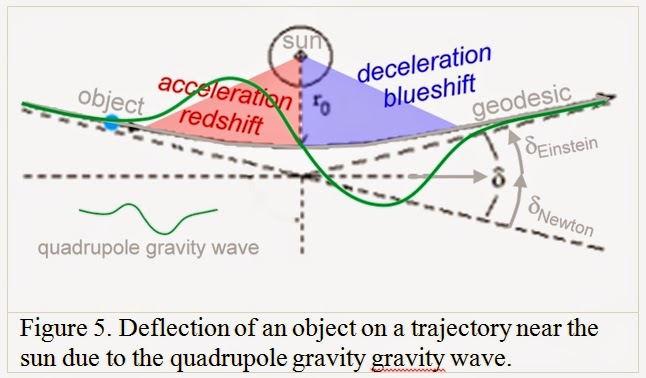 The dielectric effect delays light that travels through a dielectric medium since light slows down in a medium with an index of refraction greater than vacuum. In a fully consistent manner, a gravity field slows light and therefore results in the same index gradient, which is an alternative explanation from relativity. Whereas Einstein supposed a distorted 4D spacetime where light followed geodesic paths (shown in Fig. 5), light does not change velocity along that spacetime geodesic. Instead, a gravity field dilates time and space by the same Lorentz factor in a gravity field, which maintains a constant speed of light in the moving frame.

In the moving frame, there is no change in the speed of light because both distance and time are dilated by the same MEE factor and so in GR, there is no way for the traveler to know about their motion without communication with the rest frame. However, in the rest frame, the deflection and delay of light in the moving frame is very apparent. The apparent speed of light for the photon does in fact slow down since there is a time delay just as there is a time delay for the matter body as well.

A quadrupole gravity exchange with a photon of light results in an apparent red shift or mass loss followed by blue shift and mass gain and an overall photon delay even while the same quadrupole gravity exchange with a matter object first increases the decreases object mass and ends up with only one half of the time delay that a photon experiences.

A photon in a dielectric gradient generates an image dipole that results in an attractive force and a red shift of its frequency. In effect, the quadrupole gravity field derives from photon emissions of matter particles that end up folding back onto the particles with the folding time of the universe. The time quadrupole operator, Fig. 6, is the basic scaling for gravity force from dipole time operator of charge force. 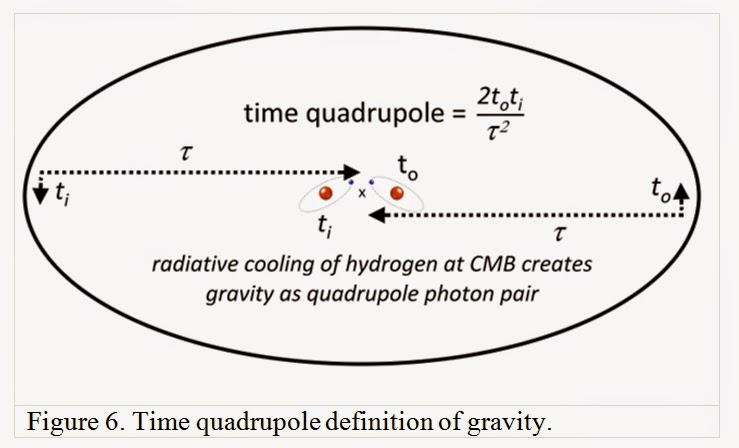 Quadrupole photon gravity is a quantum gravity and is a part of matter time, where all force derives from the same fundamental decay of the universe. Photon delay in a gravity field is twice the delay of an MEE matter object due to the fact that a photon undergoes an additional dielectric delay that is equivalent to its MEE delay.

It is from these time delays that our notion of space emerges from the action of matter. Therefore, the fundamental flaw in Einstein's GR is that a deterministic geodesic path like Fig. 5 exists. Although this is an excellent approximation, that path in a quantum gravity actually emerges from the exchange of biphotons. Similar to the exchange of virtual photon dipoles that represents the basic nature of quantum charge, it is the exchange of virtual biphoton quadrupoles that represents the basic nature of quantum gravity.

The factor of two for relativity's delay of light is actually the same factor of two that shows up in the gyromagnetic precession frequency between relativity and classical frequencies of rotating charge. This means that the g-factor that relates quantum to classical charge is the same g-factor that relates quantum and classical gravity, finally resolve the discrepancies between gravity and charge.