Thus, there are limits to compassion just as there are limits to selfishness. In fact, there are four other emotion complements that makeup our feelings as a result of our unconscious archetypes: pleasure and anxiety, joy and misery, serenity and anger, and pride and shame. Pleasure of other people and the world drives much of what we do but we must also have a certain amount of anxiety about other people and the world as well. While the emotion joy can be very pleasant, there is no pleasure of a time of joy without some complementary time of misery as well, misery being the complement of joy.

Serenity is a very desirable feeling of peace within people and among other people, but anger is also a very necessary complement that tends to limit other people's undesirable selfish behavior. Pride is how people show acceptable behavior while shame is how people show unacceptable behavior and both pride and shame are therefore necessary for socialization. 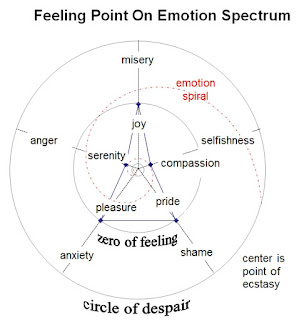 The five factor model divides personality according to whether a person is more or less:

Steven Pinker has said that the enlightenment has brought reason, science, and morality and therefore brought the global prosperity and peace as a result of individual freedom and capitalism. Reason and science are both products of a small number of very curious and conscientious people with high IQ. Reason and science are successful because they allow people to predict the future of a source given the knowledge of its past.

Morality, though, is a product of a small number of very sensitive and very conscientious people with high IQ along with a much larger number of agreeable people as followers or adherents. The overall goal of moral behavior is to reduce suffering and misery and therefore increase the likelihood of survival by cooperation. Morality comes from the grand narratives of civilization that imbue people with unconscious archetypes that provide purpose and meaning.