In particular, many leaders have used social responsibility to justify tyranny and policies that harmed or even killed some people as long as many more people benefit overall. Mao’s famine killed over 30 million people in 1958-1961 ostensibly to benefit the much larger population as part of Mao’s great leap forward in the name of Marxism. The Nazi death camps killed 6 million Jews and others in order to purify a much larger Aryan race in the name of a master race. Both used social responsibility to justify their malevolence and are examples of how bad people can be.

Therefore, there is a third very necessary archetype besides individual free choice and social responsibility. This third archetype is the realization of how bad people can be and that all people are capable of malevolence, including you. Civilization tells and retells a large number of stories with many different themes, but a recurring theme is how bad people can be since we are all prone to malevolence.

Two people on individual Cartesian paths exchange shine of compassion with each other and that exchange can bind those two into a relationship with neural bonds. Neural bonds, like gravity bonds, result in more determinate action with outcomes that have clear precursors.

Each person has as part of human nature both the capacity for social bonding to an individual or group as well as the potential for malevolence, which conflicts with people. In other words, people have a certain amount of empathy shine for others and their needs as well as certain number of selfish needs of their own to satisfy, which leads to conflict and negotiation. A person’s free choice might not benefit and might even harm someone else’s needs or wealth and even might injure them or even take their lives. However, there are many stories about how people compete for resources with others and yet still cooperate and compromise with the overall outcome of more wealth for all.

Even though two people might not ever have equal wealth or even equal benefit from every competitive or cooperative transaction, they can still both benefit and live longer and learn more to compete for wealth as well as to cooperate and compromise. A group of people bonds with the relational shine of compassion despite the Cartesian conflicts of free choice competition. Social bonds, like quantum bonds, result in more probabilistic action with outcomes that often have no clear precursors, only more likely precursors. 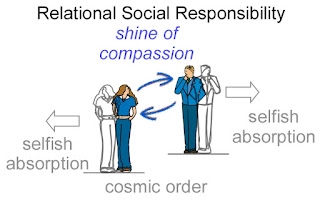 It is part of human nature to compete with others for resources, but that competition must first of all involve cooperation and compromise and must therefore be fair. The outcomes of competition are necessarily unequal because some people are just naturally more talented than others in any given competency. People are naturally diverse in their abilities as well as their desires and so, for example, there are only a very few people who are really very good at creating music and art and this means that, given individual free choice, a limited number of people can end up owning a large share of a population’s music and art. As a result, people can often feel envious and jealous even if the competition was fair. Furthermore, if people acquire wealth by force or coercion and not by fair competition, those who suffer will inevitably feel deep resentment. Such deep resentment results in criminal and even rebellious outcomes and the response is incarceration of resentful people.

In fact, given the potential malevolence of human nature, it is literally impossible for any civilization to completely avoid some criminal incarceration. Incarceration is a necessary limit to individual free choice just as politics is a necessary limit for social responsibility. Populations with large disparities of wealth along with diverse race, ethnicity, language, and religion also have large incarceration rates as well as lots of politics to promote and limit social responsibility. All that people can ever hope to do is maintain a fair competition for resources given individual free choice and limited social responsibility to permit competitive and free prosperity while also limiting the unfair outcomes of criminals and rebels.

Religions satisfy a basic human need for meaning and purpose and people therefore submit to the order of a particular social responsibility of religion. Religions give meaning and purpose by retelling the many ancient stories of a fall or malevolence and then rebirth. Religions teach a cosmic order of social bonding emerges from a seemingly meaningless quantum chaos of individual free choice. The bonding of people into religions always involves their giving up some individual free choice for the benefit of learning the archetypes, stories, and rituals of that religion's social responsibility. In fact, all people must learn the archetypes of compassion and shame to live in a cooperative and yet still competitive civilization and religion provides those archetypes for social responsibility along with stories about human malevolence.

Today there has been a remarkable reduction in global poverty along with increases in life expectancy and education. These successes seem to have been largely driven by the rise of individual freedom along with the proliferation of social responsibility in competitive and fair markets. Although competitive markets varies widely among different politics, the one consistent factor is the incentive and pricing of a competitive market. Even countries with particularly high wealth disparities like Namibia show that competitive markets still reduce poverty while increasing both life expectancy and education.

Ever since China and India have evolved from a tyrannical social responsibility to ones that allows more individual free choice with incentives for competitive free markets, those economies have grown and will continue to grow and prosper. The growth of competitive markets repeats in Africa where even the most impoverished countries continue to show people with longer lives, more education, and less poverty.