Einstein was the first to explain the electric impulses of the photoelectric effect as a quantum consequence of single photons in 1905. Although Planck had some years earlier in 1900 proposed the notion of a quantum of light to explain the nature of blackbody emission, it was Einstein who first recognized the quantum nature of light photons as particles in the photoelectric effect. Light made up of finite photon particles instead of the classical determinism of infinitely divisible light waves birthed the uncertainty of discrete quantum mechanics. 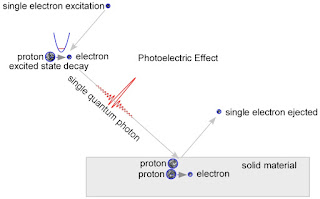 Classical physics had long accepted the notion of light as an infinitely divisible wave and then quickly adapted to the semiclassical notion of light as a large number of single photons or electromagnetic pulses in time and space. However, even such a semiclassical photon of light shows the uncertainty principle and so photons are not subject to classical determinism. Rather, a single quantum photon obeys the quantum uncertainty of superposition of many paths, polarizations, and energies. Specifically, while classical determinism argues that a classical single photon particle can only be on one path at a time with well-defined polarization, frequency, and location and all simultaneously knowable to arbitrary precision.

The single quantum photon exists instead with an uncertain outcome as a superposition of paths, polarizations, and frequencies. As a result, there is a well-defined limit to the precision of any simultaneous single photon measurement of path, polarization, and frequency. Nevertheless, many of the semiclassical notions of a photon survive and result in much quantum confusion that precludes determinate outcomes.

A photon is an electromagnetic pulse that has a spectrum of frequencies in its Fourier transform. This fundamental relation between time and frequency is the foundation of the uncertainty principle. A short pulse of light is made up of a broad frequency spectrum and a long pulse of light is made up of a correspondingly very narrow spectrum. Thus a photon is a fundamentally quantum object that can nevertheless behave like a classical particle of matter under certain conditions. A classical particle of matter has a well defined path, mass, polarization, and location and a particle of matter can behave like a photon under certain conditions as well.

A charge bond is a photon exchange with complementary emitted photons since it is necessary to lose heat to bond charges. A gravity bond is a biphoton exchange that also has a complementary emitted biphoton since it is also necessary to lose heat to bond gravity matter. As a result of quantum gravity, atomic hydrogen can exist as a cold vacuum lattice cloud. As the cloud density grows with more and more cold hydrogen, eventually molecular hydrogen forms and the lattice spacing decreases until it nucleates. At this point, there is a transition from gravity to charge dispersion and nascent stellar binary nucleates condense with orthogonal spins. One-half of the cloud lattice collapses into one spin while the other half collapses into the orthogonal spin.

Quantum gravity bonds form and emit heat in a concerted spiral of condensation in the nuclei of molecular clouds. However, quantum gravity biphotons are 1e-39 less than quantum charge photon and so represent a virtual continuum of spiral states with orthogonal spins. While one spin condenses with like spins into one spiral, the orthogonal spin condenses with complementary spins into the complementary spiral of a stellar binary. It is important that the stellar nuclei continue to lose heat as the molecular cloud collapses with radial accretion. Heat loss occurs from hot axial jets that result from the cold radial accretion until fusion eventually ignites the stellar nuclei into nascent stars.

Once again, there is really no such thing as a classical photon because a photon is a pure quantum manifestation. Complementary to an atom as a discrete quantum of matter that is a superposition of electrons and protons, a photon is a discrete electromagnetic quantum that is a superposition of frequencies, polarizations, paths, and locations. However, there are various semiclassical simplifications for a photon that people find useful in certain contexts just as there are for atoms. For example, a simplified semiclassical photon may have a single frequency even though a quantum photon is always a spectrum of frequencies and never a single frequency.

A semiclassical single photon has a well-defined pulse path and location and cannot be in two places at the same time. However, a quantum single photon exists as a probabilistic superposition of all locations in the universe. At any given moment, that single quantum photon can exist as any number of paths and locations with various probabilities.

Classically, there is no limit to the precision of simultaneous measurement of a particle momentum and location. A photon, however, has a discrete quantum limit to the precision of simultaneous measurements of both photon frequency and location. As a result, the more localized the photon, the broader the frequency spectrum becomes and eventually, the light wavelength exceeds the apparatus size. At that point, the measurement becomes meaningless.

Likewise, a semiclassical photon may have a well defined average location in time, but a quantum photon is always a distribution of locations, never a single location. A semiclassical photon may have a well-defined single path, but a quantum photon always exists on a distribution of paths, never just a single path. Moreover, matter has the complementary quantum properties of light.

Matter has a well-defined average location in time and matter is stationary while light only moves at a constant speed. Matter also oscillates complementary to light with a distribution of frequencies and also has a distribution of locations about an average location. An atom of matter has an average mass or frequency, but matter is also a distribution of masses about that average mass. While there are fundamental particles with very well-defined rest masses, quantum particles really only have inertial mass complementary to light. Rest mass just represents a particle’s interaction with other matter, which photons of course mediate.

Finally, classical matter has a well-defined average path, but quantum particles exist on a distribution of paths. However, upon interaction with other matter, any such distribution decays very quickly into the one path that we call our rest frame reality.