Here is a diagram that shows scalar gravity shadows that results from the matter body bonds to the universe along with the radiant vector gravity that transfers momentum from inner to outer stars. Radiant vector gravity transfers momentum from stars inside the CofM to stars outside the CofM. This radiant momentum transfer is what keeps spiral galaxies rotating at constant velocity instead of at their Keplerian velocities. 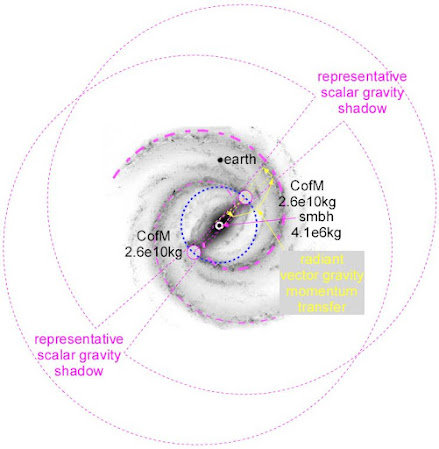 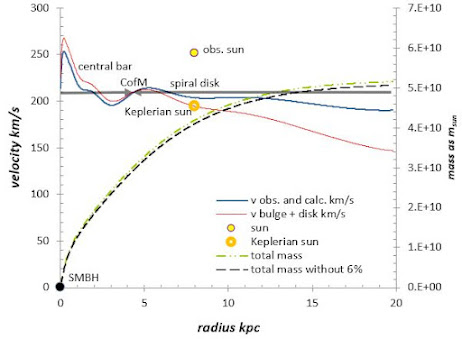 The figure above shows the biphoton shadows of scalar gravity along with the radiant vector gravity momentum transfers from inner to outer stars. Since the Sun is quite a bit more luminous than the average MW star, the Sun rotates faster than the galaxy average. The MW average rotation velocity is 204 km/s at r = 8 kpc while the Sun rotation is 251 km/s, which suggests that the Sun is 251 / 204 = 23% greater than the average stellar MW luminosity.
Since the average stellar luminosity is 2.1e10 Lsun / Nstars, this result further suggests that the number of MW stars is 91 billion as Nstars = 2.1e10 / 0.23, which assumes that MW stars at r = 8.0 kpc are representative of the whole MW. This MW 91 billion star estimate is at the lower end of the typical 100-400 billion star number estimate often cited.
Radiant vector gravity is also consistent with the Bullet Cluster 1E 0657-56 galaxy collision that displaced large gas clouds that were 10-15% of galaxy matter from the two galaxies shown. Despite the matter displacement of 10-15%, the weak-lensing contours of each of the two galaxies still align to the galaxy's radiant stars. These results show clearly that vector radiant gravity as well as static scalar gravity are both lensing the Bullet cluster. 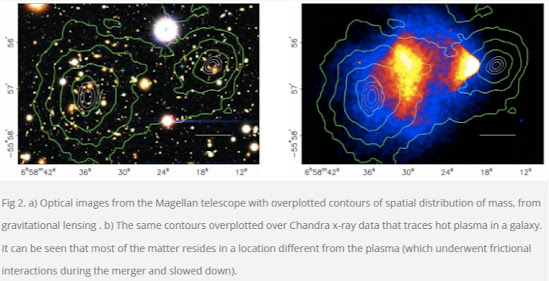