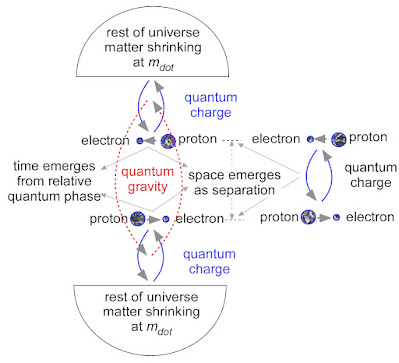 Gravity relativity emerges from the fundamental equivalence of mass and energy for particles that exist in relativistic spacetime. To first order, the Lorentz invariance of the speed of light to velocity of a particle distorts space and time by the classic sqrt(1/(1 - v^2/c^2)). There are higher order terms that converge to the Einstein tensor as proportional to the energy-momentum tensor,

All of the complexity of general relativity reduces to this tensor equation and yet there is no accepted quantum gravity in spacetime. This is because each particle of matter introduces a singularity at r = 0 in spacetime that precludes a quantum electrodynamics exchange particle for gravity.

One consequence of GR is the black hole singularity that are widely accepted in general relativity but have no quantum meaning in QED.  A black hole has mass and spin just like any other particle in the quantum causal set universe and black holes bond to the universe with photon exchange just like all matter particles. Thus, black holes are just another matter particle in a quantum causal set, which is about each matter body bonding to the rest of the universe with quantum photon exchange.