Getting from Here to There

A quantum event occurs when an excited source photon is in resonance with and therefore goes on to excite an observer with that same photon. While science approximates such quantum transitions or jumps as instantaneous, that approximation is not really true even though it is often quite useful. In other words, getting a photon from here to there does take time and there are no instantaneous photon transfers.

One very common classical approximation of a quantum event is to have a excited source photon excite a classical observer in a completely separate second event long after the photon travels for a period through space following a first and separate source emission event. This is only an approximation and for a quantum observer, the same photon excites a quantum observer during the same event as the source emission.

Quantum gravity between the two hydrogen atoms shown involves the complementary exchange of the biphoton excitations that exist in each atom. Unlike the relatively short wavelength of the Rydberg photon at 13.6 eV, the very long wavelengths of complementary gravity biphoton excitations mean that phase decay is very slow. Thus the very slow phase decay of quantum gravity means that classical gravity does not need to include phase for precise predictions of quantum action. 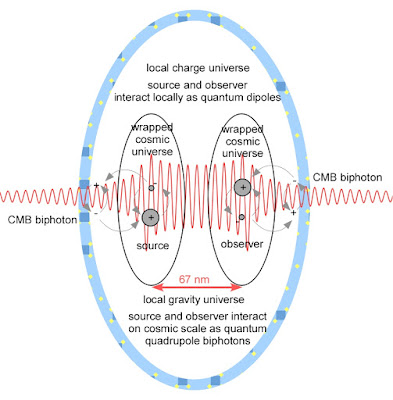 A photon event can be over in a few nanoseconds and nanometers or a photon event can last the age and radius of the universe. Now to be sure, a source can dephase from a photon event long before the photon excites an observer. However, phase decay is simply a part of how the universe points the direction of time and does not change the fact that there is some period of phase coherence between source and observer. For the very slow phase decay of quantum gravity means that until very large scale, classical gravity works very well. 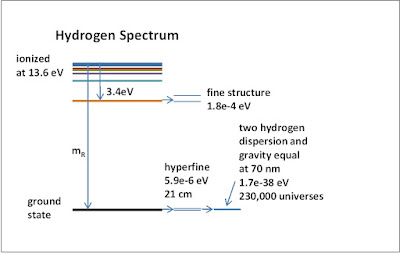 In a classical approximation for a quantum state-to-state transition, there must be a series of vacuum states that span the gap between two states. In aethertime, the density of states of quantum gravity biphotons in space is very large and more than provides the needed laddering for filling the gap. Similar to phonon decay in the solid state, gravity vacuum modes provide the mechanism to bridge the gap. These high order quantum gravity states are then what carry photon amplitude and phase and replace the vacuum oscillator modes of QED.