In the aether universe, there are still no absolute locations like a single center of the universe and that center was one of the original ideas about aether. However, the CMB velocity does provide a universal frame of reference for motion or action since anyone in the universe can measure their velocity, vae, with respect to the CMB, which is the velocity of creation. The CMB creation velocity defines the speed of light in the current epoch of aethertime and that velocity vae increases with decoherence time. There is a quantum phase noise, d,  due to the universal decay of quantum aether at aether velocity along with growing force due to increasing speed of light. 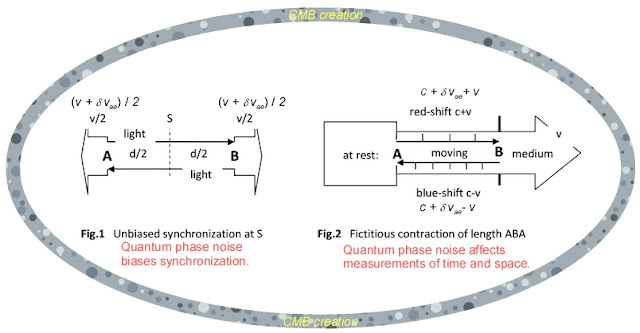 The absolute determinate goedesic paths of general relativity remain determinate with the biphoton quantum gravity of aethertime. However, action and matter along the gravity geodesic are uncertain just as the paths of quantum charge are never completely certain even though quantum aether paths are mostly knowable. In fact, the paths of all sources in the universe are perturbed by both the chaos of classical noise as well as quantum phase noise. The classical noise of the chaos of intensity fluctuation is usually many orders of magnitude greater than the coherence of quantum phase noise.

Reference: Original figure from Blumschein.
Posted by steve agnew at 8:57 AM