The Easter full moon sets the stage for the rebirth and resurrection of Spring from the doldrums of Winter. Here is the Easter full moon and sunrise for 2021mar29...one day after the actual full moon, which was cloudy. Easter Sunday always follows the full moon after the vernal equinox. Although the Earth spin sets the day and the Earth-Sun spin sets the year, the Earth-Moon spin oscillates over an eight year cycle and so Easter changes every year with an eight year oscillation. 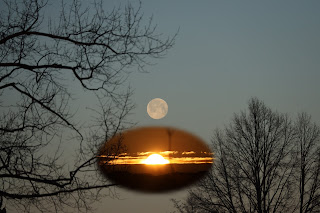 The oscillations of matter and action determine how things bond to each other in the universe. Oscillations bind electrons and protons into atoms, bind atoms into molecules, molecules into bodies, and bodies to other bodies. In fact, it is neural oscillations that bind people into factions as social bonds. Thus it is not surprising that the Earth-Moon oscillation is part of the social bond of civilization, Easter.

We get our sense of time from a combination of the day of Earth spin, the year of Earth-Sun spin, and month and week of Earth-Moon spin. While the day and year are now part of the oscillating spin of the Science's atomic clock, the Earth-Moon spin period oscillates 99 times over 8 years. In fact, the latest full moon on Sunday 2020mar28 is the 29th full moon of the latest 99 moon cycle and so we are in the third year of the 8 solar year cycle of 99 moons. The figure shows this full moon oscillation versus the fractional solLunar year. Easter is the Sunday that follows the first full moon of the vernal equinox and this year occurred at 11:48 am pdt on Palm Sunday 2021mar28. 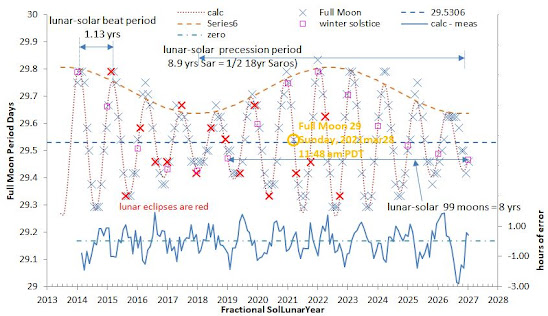 Thus, it is not only oscillations of the earth spin and earth-sun spin that gives us our feeling or time, oscillations of the earth-moon spin give us a different feeling of an oscillating time. After all, the moon cycles are what drive the tides and also drive human female menses. Full moon cycles have long been markers of oscillating time, especially for ancient night ceremonies in early times before artificial light. While there are many holidays associated with the Earth and Earth-Sun spin oscillations, there are also holidays associated with Earth-Moon oscillations as well.
The oscillation of 99 full moons to eight solar years is part of the solar eclipse oscillation that repeats every 18 years, the Saros. The Babylonians discovered the Soros cycle 2,600 years ago in the same century as the destruction of the Temple and the enslavement of Israel. These are the oscillations that bind us to our past...
Posted by steve agnew at 10:04 AM